Then a sandwich of foam on the inside and outside were added, for both stability and for safe handling. This was covered with a layer of fleece on both sides. The fleece was hand painted with acrylic paints, something that was crucial to making sure all of the puppets matched each other. 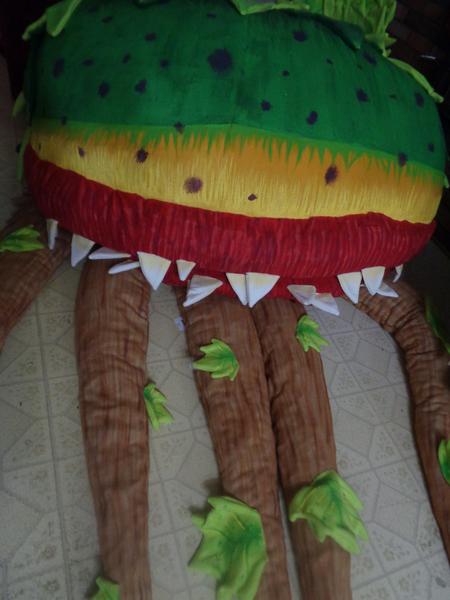 The biggest puppet is, essentially, built in a similar way as the one below it. I wanted to keep the puppet as light as I could, so the frame was built out of pvc piping. The top of the puppet has a layer of chicken wire in it to help it hold it’s shape underneath the foam. The chicken wire was omitted for a few more bars of pvc piping, so that it wouldn’t risk poking anyone while they were being eaten.

Ah yes, the big girl. Gigantic Ms Audrey II. From my searches on the internet, everyone has had their own interpretation of how to make the gigantic puppet.

All of the leaves are sewn and hand painted as well, although the larger leaves are only painted on one side, as they stay snug against the top of the puppet. The vines are large tubes of fleece painted to have a bark-like texture, and stuffed with foam pieces. After this project, I adore foam pieces! It gives it a bit of springiness that polyfil just doesn’t have. The teeth are made much like the leaves, sewn, then painted, then covered in a layer of mod podge to keep their shape.

For anyone who shared how they made their Audreys, or even just posted video of them in action, I have to give a collective ‘thank you’ because otherwise I’d have had no jumping ground to start from. As it is, this puppet doesn’t have any progress shots, like I do with the others. By the time I got to it, the clock was ticking and I needed to work as fast as I could. Everyone likes to sit back and enjoy their work every so often, but I didn’t have a lot of time to. So I’ll just talk about the work instead! 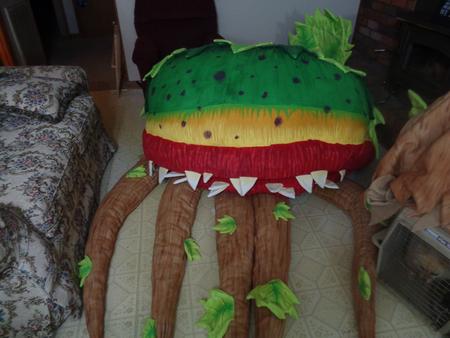 Really, the construction of this beast was simple, just time consuming! I’d like to play around with different techniques if I ever get the chance to work on a project like this in the future. I’m so glad I got the opportunity for such a thing!

The bottom jaw connects to the top via bungie cords on the inside, with a bar that allows you to move the jaw up and down. Alternatively, you could leave the bottom jaw rested and use the support bar on the top jaw to move it instead.