I understand this one began as a video game, but thanks to the geniuses at DC making a prequel comic series, I can touch base on this one as a fellow comic book example. You see, in “Injustice” the Joker not only manages to trick Superman into killing his wife and unborn child, but inadvertently destroy all of Metropolis. This makes Superman snap (as it probably would anyone in that position) and he flies off to kill the Joker. Batman plays as the voice of reason, but this time around Clark isn’t listening. He has lost everything and decides the world needs to be dominated and controlled so that this kind of thing doesn’t happen again. Here, Bruce fights for justice and freedom from tyranny and oppression. He uses his vast intellect to create several devices (including a strength/invulnerability pill that mimics Superman's attributes) to help in the fight, but here, Superman is no longer worried about watching over his “friends” and thus Batman must contend with rogue members of the League instead of just Superman. Here, we don’t really get to see much of a fight between the two, though a certain scene with Alfred is probably one of the best ever done. It's the overall conflict and the fact that it spans into a parallel universe in order to finally come to its dark conclusion that makes this fight between the heroes so memorable. Here, EACH person knows the other, and instead of a one-on-one fight, they make it into an all out war. If you thought just a regular knock down drag out brawl would be crazy, just the idea of these two creating armies and facing one another in a game of strategy is enough draw tons of readers in.

But that is that for this week. Next week, we wrap up our Batman versus Superman story line as The Power Trip takes his comic book knowledge and, with the wonderful audience that is all of you, applies it to the upcoming movie plot! Do not miss next weeks episode of The Next Issue! Thanks again to Patreon donor Chip for suggesting this topic! Want to decide a future topic?  Become a donor at Patreon and you can choose topics for any and all content areas at The Culture Cache!

While not officially the fight on everyones mind, I bring this battle up because this is the style of fight everyone thinks about. When you mention to someone, “Who would win in a fight to the death between Batman and Superman?” most of the arguments you have mentioned more aptly fit the style of these two warriors. Owlman and Ultraman are the Earth 3 evil counterparts to our beloved heroes. Ultraman is a power mad tyrant who rules over the Crime Syndicate and uses his sheer brute power to dominate the Earth. Owlman is not quite as different to Batman as his rival is to his counterpart. The older brother of Bruce Wayne actually killed his parents and his brother to inherit the vast fortune. Then went on to be one of the biggest crime bosses the planet has ever seen. As far as fighting skill goes, Ultraman and Owlman are almost exactly like their dopplegangers only they use brutality, will torture, and, of course, will kill anyone in their way. Alot of fans will actually mention the idea of Batman beating Superman by taking his power with red sun radiation and then stabbing Kal-El with a kryptonite knife for good measure, but these tactics are more up the alley of Owlman. Same with Ultraman destroying the planet or just melting his opponent from the safety of space. If you follow the story of Earth 3, these two men actually work well together in their team up to conquer the universe, except for one tiny problem. Super Woman, who is dating Ultraman, is also two-timing with Owlman. Ultraman looks at Super Woman as his property, and Owlman looks at her as a prize he can steal from Ultraman to prove he is the more dominant villain. This fight, if it ever was written to go down like an Earth 3 “Dark Knight Returns” could be one brutal, bloody, violent, planet destroying mess.

Aaaaannnnndddd of course, what would a “Superman versus Batman” article be without bringing in the granddaddy of them all. Frank Miller's “Batman: The Dark Knight Returns” is the standard for any battle between these two giants. Here, a fifty-five year old Bruce comes out of retirement to protect Gotham. Superman, at this time, is living up to the “Truth, Justice, and the AMERICAN Way” slogan he had for so long by working directly as a tool for the President of the United States. This fight did what so many wish they could see again, pit Batman against Superman in a punch-per-punch fight and by the end of it, Bruce won. 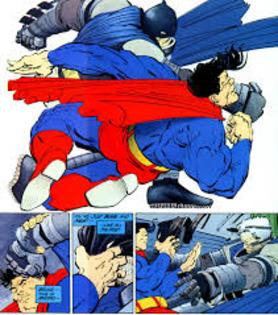 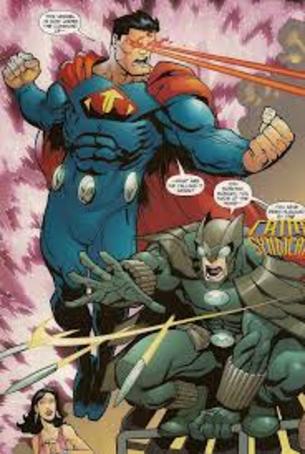 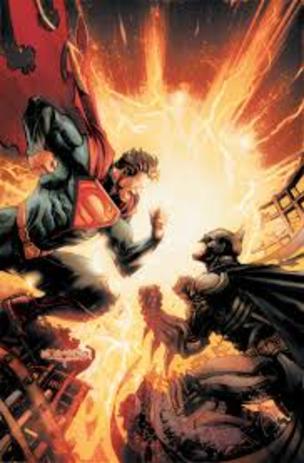 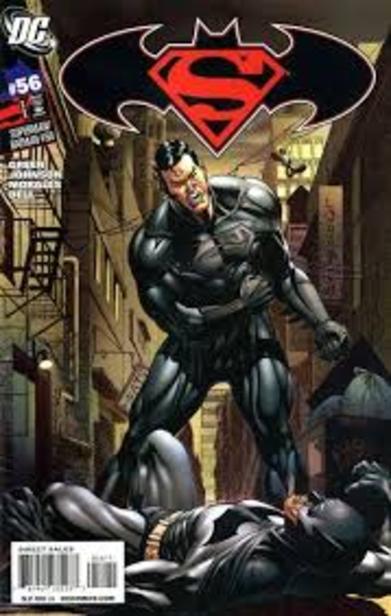 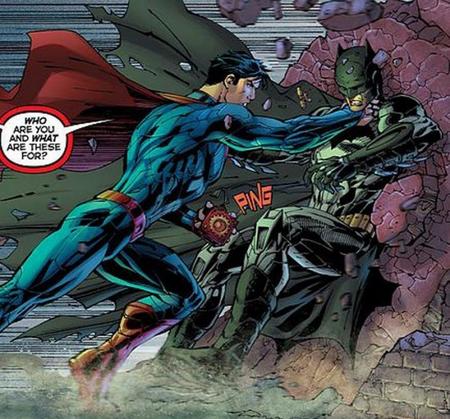 I touched upon this fight a little in last week's video, and I’m using it here as well to show how a fight between these two heroes could (and pretty much did) go when they first met. You see, after the reboot of the Flashpoint, the timeline revamped to where heroes had only been around (that we know of) for five years. Superman was the first public superhero, and even then, no one really knew much about him. Batman had been around longer but was known more as an urban legend. So, when Batman and Green Lantern go to question Superman about a strange alien device from Apokolypse, things go south. Green Lantern, in all his asshole glory, decides he’s going to bring in big blue for questioning. Lantern ends up pissing off Superman and then gets knocked to next Sunday. This leaves Batman and Superman to have their first altercation in the new timeline. At this point, no one, not even Batman, knows much about Superman. He doesn’t know his powers, his weaknesses, nothing. So he tries everything he has in his belt and then some. Nothing works, of course, and, finally, Superman pins Batman to a wall. In comes Lantern, crashing the party again, as the only leverage Batman has against big S. This fight shows us two things pretty clearly. The first is one I think anyone can see and agree with, and that's that, mano a mano, without any prior knowledge of the other, Superman takes the fight. Second, and this one's also very important, is that this is the closest you’ll ever really get to the one true Superman facing the one true Batman in a knockdown drag out fight! There is another great example of this I’m planning on getting into down the line here, but without mind control, politics, any real tampering by some outside force (minus Lantern being there to just trigger the event in the first place), this is as close as you will see for a while.

Now we can debate over and over again, and we probably will over time. Batman versus Superman can not be 100% settled for many reasons. It always comes down to story. Who wins the battle “this time” will always be dictated through the type of story written. For TDKR, it was the champion of humanity scoring the final blow for the people. In “Super/Bat,” the Last Son of Krypton had to win to save his best friend as well as the world. You can not have and will never have a true final battle between the Man of Steel and Gotham's Guardian because the main continuity versions are, at their cores, heroes, best of friends, and champions. They are not meant to kill one another. That is why we have alternate realities, third party manipulation, and shifting timelines! But that is also the fun in the “what if” moment, as we get to look through all the times these two powerhouses have slugged it out and choose our favorite. Whether it's because of the story, the art, or just because we liked who won, we all win in the end. Because we are reading a fantasy within a fantasy. Thats right! Think about it. We are so ingrained that we know what the “real” Superman and Batman are like that we need a fantasy match up about fantasy characters because we cant have a real match up between FANTASY characters! These two icons have become so “real” in who they are at their cores that we have to create “fake” versions of them to have these stories. Try wrapping your head around that one the next time you want to debate this rumble.

In Batman/Superman issues 37-42 (the Torment storyline), Superman is mind controlled by Darkseid and forced to fight Batman. Superman gets the jump on Batman and manages to fatally injure Bruce. Bruce, of course, is saved from outside help and healed. This would not be the only time the two would fight in the pages of Superman/Batman, as later, in issues 53-56 (the Super/Bat storyline), Batman is mystically given Superman's powers at the cost of his sanity. This one puts an interesting twist on the tale as Superman, with the help of many, many heroes, must take down Batman and fix what has been done. Both fights are, once again, between the main continuity Superman and Batman, but this time around, a third party influences and, thus, forces the fights. Both fights also show a point that I have mentioned previously. In a fight between the two, it comes down to how prepared and knowledgeable Bruce is. In “Torment” Bruce is caught off guard and almost killed, and in “Super/Bat” Clark has to trick Bruce in order to get his powers back.

Once again, this was a Bruce that was very much prepared for the fight, and while Superman was (to a fault), he spent much of the fight trying to just convince his friend to back down. One of the many things that makes this fight so amazing is that, with the exception of Superman's overly patriotic attitude, this is the closest ever anyone would get to seeing a near death, non-manipulated, no brainwashing involved, battle between these two heroes. Superman is still a hero of the people. He still will not kill, and he is almost every bit the Superman we know and love, minus his direct tie to the U.S. government. While Batman is very much Batman. Any slight discrepancies to Bruce are easily negated by the fact that he is fifty-five and cannot pull all his punches like he use to. In fact, if you take into account Bruce’s age and think about if this fight occurred with Bruce in his prime, then Bruce would have made even shorter work of Clark. You will not find a truer account of these two heroes battling it out. Batman, knowing his own mortality and age, fights for what's right for the people. Bruce is fighting for freedom, fighting for justice, fighting for humanity, while Clark is fighting to protect his friend from himself while protecting the very letter of the American justice system. While set in an alternate reality, this is widely looked upon as the true battle of The World's Finest.

Hello everyone, and welcome to The Next Issue. This week, we continue our in-depth look at the battle of The Man of Steel versus The Dark Knight. This week, I thought I would touch on a few different times The Last Son of Krypton has gone toe-to-toe with The Caped Crusader and why these moments work so well.