Tyler: I cannot thank every member of the cast and crew from the last 3 seasons enough. It's very humbling to look at a (long) list of people who are willing to step out of their comfort zones and/or sacrifice time, money, and energy and pour themselves into a unified vision and achieve something greater than themselves. I especially want to thank Liz Davis, Asya, Caleb, and Michelle for trusting me to take over something that means so much to so many. 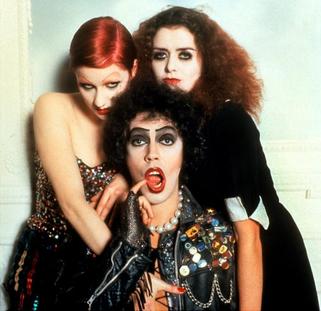 *To be more like the stage's Rocky Horror Show than your typical shadowcast of the Rocky Horror Picture Show. It was simply the natural thing for me coming from a background in theater as opposed to something like a burlesque troupe.

Tyler: The spectacular performing and catchy rock and roll tunes are a huge part of it. Another is that is brings weirdos together. The culture it creates lets you know you're not alone.

Asya:  I AM THE FIRST FEMALE FRANK IN TRANSIT BEAMS HISTORY! I never say that, but
it is true. Brad and Janet are the only characters that have remained gender true the whole run of the Transit Beams career. No particular reason; in fact, I'd like to play Brad someday. Barry Bostwick actually
watched “Science Fiction” and “Dammit Janet” at (Knoxville’s) Fanboy Expo 3 years ago. He said we "did a really great and entrancing job. He would have loved to stay to see the whole show." I like that. I also had the longest running phantom run. Everyone else did 1-2 years of phantom roles. I did 4. This is my 2nd year as Frank, and I still love my phantom experience and owe my Frank to my years as a phantom. Phantoms are my favorite on stage roles, to be honest.

Asya Mounger, Producer/Frank N Furter: This is my 6th season. so my 5th year.

Tyler: When I took the reins as director I had a few specific goals in mind:
* To move the tone of the show away from the burlesque feel that was prominent in every shadowcast I had ever seen. If nearly the entire cast is wearing fishnets and corsets, then I believe you marginalize the impact of some huge moments in the show, like Frank's reveal and the transformation Brad and Janet go through from Ralph and Betty's wedding until the Floor Show.

3) When did you attend your first live screening? 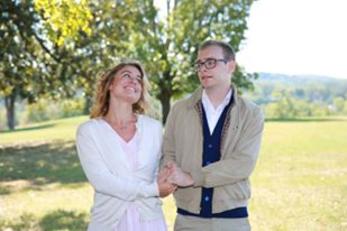 Michelle: Snuck in to the Bijou Theatre in Junior high. (editor's note:  We, at The Culture Cache, genuinely don't care what you do, but if you choose to break the law, you didn't get the idea from us.  YOU made the choice, not us, and we're not responsible for your actions)

Asya: Tennessee Theatre, October 2008. I still carry my ticket in my wallet.

Bringing Rocky to Life: A Conversation With The Knoxville Transit Beams

If you're reading this, I hope to see at Relix Halloween night for our tradition unlike any other. 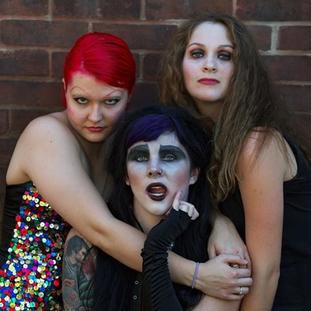 Asya:  Eddie! My first favorite. Frank is obviously more than a character to me. He's something more that doesn't have words. Eddie is fun and rock 'n' roll. The wannabe punk kid in me will always love him for that.

7) What is your favorite song?

Learn some of the movie callbacks in this video! 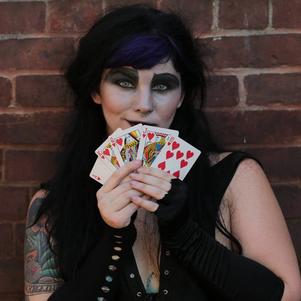 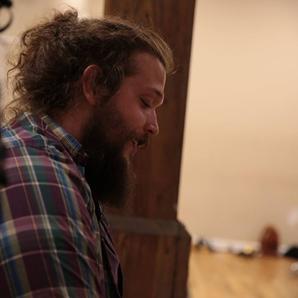 Asya:  Ha! That changes with the seasons. Right now? “Over At The Frankenstein Place” and “Super Heroes.” It's just so hard to pick. What's easy to choose to my least favorite—“SWORD OF DAMOCLES.” Ugh. I hate that song. The stage version is even awful. 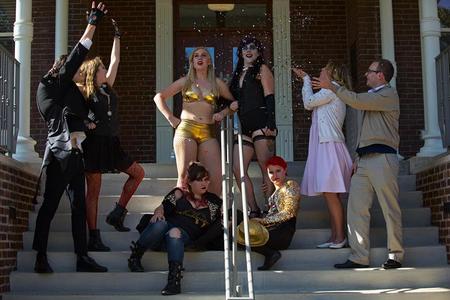 Tyler: As a stage show guy, I love it. As a shadowcast director, I do not care that it is gone!

Asya:  I was 14 and a freshman in high school. A friend told me about it in Choir class and I went home on Christmas break and watched it on loop. I was so excited to go in the first day back and tell her I learned “The Time Warp!” Being a shitty teenager, she was not impressed. I'm still excited about that 14 years later. 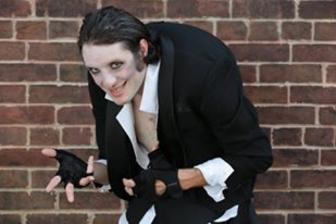 2) When did you first see RHPS (just the film itself)?

4) How is the Transit Beams show different from other live shadowcasts?

Tyler Gregory, Director: That isn't such a straightforward answer for me. I was sort of a part of the 2011 version of the Transit Beams. I played guitar in a band that performed songs from Rocky during the preshow for that year's performances at the Clayton Center and Relix Variety Theatre. During the Relix show, a Phantom dragged me on stage for “The Time Warp.” (During the) next few years, I would cameo as (The Big Lebowski’s) The Dude during “Time Warp” and “Eddie's Teddy,” but I would attend only the last two rehearsals before the show. So, surprisingly, I was never a full time cast or crew member of a shadowcast before gaining creative control of the company in the spring of 2015. 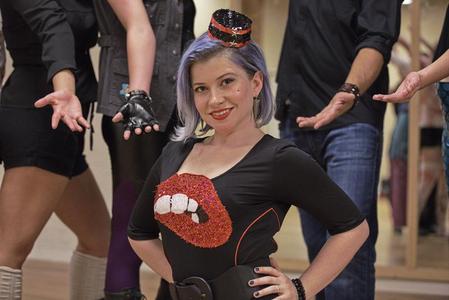 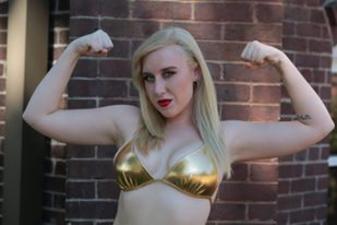 Michelle: I love hearing Barry sing. It’s a little slow, so I understand why it was cut from the film, but I feel you really get to understand what's going on in Brad’s head.

Asya: It is for freaks, weirdos, abnormal human beings, and everyone in between. At first, it was something that made people uncomfortable, so they needed to make fun of it to make it acceptable. Now, the "virgin" in the audience is the abnormal one. But instead of turning them away, we give a little taste of our life and welcome them with welcome arms. It's a family.

*To make it a visually dynamic show from beginning to end. The Transit Beams have always been great at creating iconic moments like the Human Throne, but every shadowcasting of RHPS I had seen before had significant lulls in the on stage action during certain parts of the film. We've kept and grown traditional things like the aforementioned Human Throne, and I believe have created new iconic moments like the choir lifting Riff up for his reveal or the apparatus used during the creation of Rocky that make it nearly impossible for the audience to take their eyes off of the actors for the duration of the show. 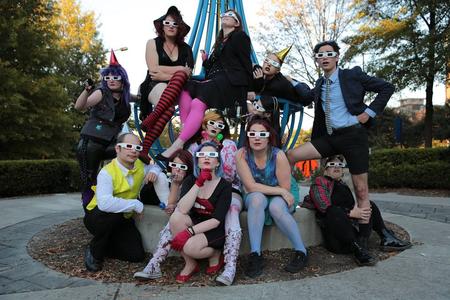 6) Who is your favorite character?

* To be a true collaboration, and create an environment of inclusion, love, support, and growth both emotionally and creatively.

Tyler: This is like asking who my favorite child is. I relate most closely with Eddie, Riff, and Frank, but I'll have to go with Dr. Frank N. Furter.

1) How long have you been involved in a shadow cast?

5) What is it about RHPS that has made it such a cultural phenomenon?

Michelle: To not be afraid of being your true self. We are all freaks who just want to be loved.

Michelle: Truest to the movie, we push the limits.

9) Anything else you wanna throw in?

Tyler: My first live screening would have been in 2009 or 2010, but that is really ancillary to the first live performance of the Rocky Horror Show I saw that was produced by the Roane State Playmakers in the October of 2006. Music was done by the incredible Phil Pollard and the Band of Humans; the cast was loaded with talent, and the energy in the house was absolutely electric. I was hooked.

I had the honor and privilege of interviewing three members of The Knoxville Transit Beams, the longest-running RHPS shadowcast company in Knoxville, Tennessee. They are prepping to stage another Halloween spectacular this year with a mostly new cast of principals and Phantoms (the name for the actors who participate in all the scenes as Transylvanians, human props, and beings who enhance the overall environment of the production).

The Rocky Horror Picture Show is such a fascinating cultural phenomenon.  The campy film based on Richard O’Brien’s stage show initially tanked at the box office, only to live on as a Halloween tradition, a safe haven for unconventional conventionalists, and a classic that somehow finds ways of refreshing itself for generations of fans and participants.

Asya:  I like to describe us as Neo-classical. We are a group that loves RHPS, performing, or a mixture of both. You have people who get to follow the movie to the tee, like out Janet and Brad have. Then there are the ones who go outside the box. We have always let the phantoms and principals express THEIR characters, not the characters on the screen. The beautiful thing about our show is you can take the screen and the movie away (a scenario that has happened to us before) and we still have a wildly entertaining show. We ARE The Rocky Horror Picture Show, not the performers of The Rocky Horror Picture Show.

The Knoxville Transit Beams will perform The Rocky Horror Picture Show, LIVE HALLOWEEN SPECTACULAR, on Halloween at Relix Variety Theatre in Knoxville, Tennessee (1208 N Central Street, 37917). Admission is $10 at the door. Door opens at 9pm w/ LIVE! Shadow Cast at Midnight.
Ages 18+. Spend Halloween with them and let them chill, thrill, and fulfill you!

Asya: I love, love, love, love, love that song. Brad had so many songs cut from the movie. He had a verse cut from “Frankenstein Place” that was delightful. And “Once In A While” is just as great. i think it makes Brad more likable and human. I would love to hear why they cut it because not only does Barry Bostwick have a beautiful Broadway baby voice, but the song itself is so incredible. Getting to perform the show with a cut of the song edited back in once was phenomenal. True fans know it, and one guy was in tears he was so happy. That one guy was worth it. Even if 90 other people didn't know, he did. And that is a high you can't ever repeat.

Tyler: As a very young child--maybe 4 or 5 years old?--I called it "The Lip Movie" and my mother would put it on and I would dance my little ass off. Of course, I understood exactly 0% of the content.