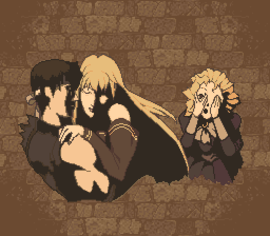 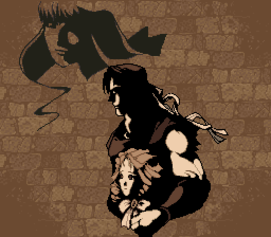 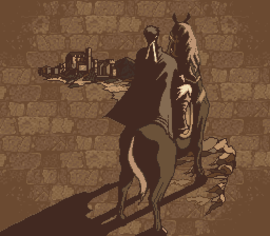 So, bottom line, is the game worth its asking price?  In many ways, that all depends on what type of gamer you are.  I checked the most recent prices literally minutes before publishing this article.  You can realistically expect to shell out $220 for a loose cart.  It really is a great game and is fully worth its original retail price even now, but at triple the MSRP, you really want to make sure that this is a game you want.  Castlevania is my favorite series, so this game is right up my alley and is absolutely worth it to me, but I do advise caution on this one.  Overall, I’d say that Super Castlevania IV is a better game, as is Rondo of Blood, which is now often cheaper than Dracula X.  If you’re a serious collector, you really have little choice.  Castlevania fans will be happy with it, as will most 2D action fans.  Having said that, unless you are a big time collector, or a serious fan of Castlevania or Konami, as much as it pains me to say it, I cannot recommend the game at that price.  Having said that, I think much of the criticism this game receives is unfair.  It is a great experience, start to finish, and is certainly a worthy successor to the sheer gaming bliss that is a classic 2D action-based Castlevania game. 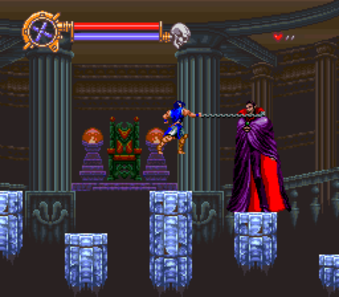 Speaking of difficulty, take a look at the Dracula battle.  While you do have a life bar, you’re not likely to need it.  Just look at the floor!  More importantly, look at how much of it is missing…  A single hit is enough to plunge you to your death.  A handy tip that players often overlook in this game is that if you are ducking, you won’t fly back upon taking damage.  This useful little reminder can mean the difference between success and failure in a battle this hectic. 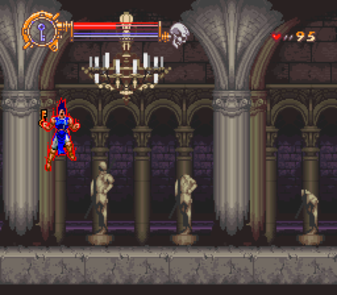 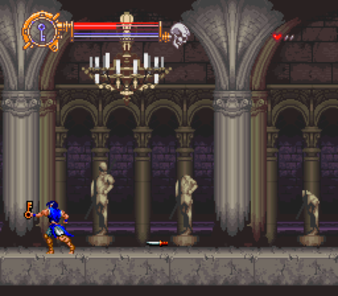 How you rescue these girls actually adds to the difficulty of the game in a significant way.  You need to acquire a key “subweapon” and hang onto it for a while.  This gimps Richter immensely!  Like to chuck daggers to perforate enemies from afar?  Gone.  Using axes for death from above?  Nope.  How about holy water to make it rain all kinds of destruction?  Guess again.  The mighty cross and its spectacular item crash?  Not a chance.  In lieu of an actual subweapon, you’re stuck with a lousy key.  Granted, if you aren’t concerned with which ending you get, feel free to ignore the key and play the game as usual, but it really is worth it to try to view all three endings.  Thankfully, the key isn’t completely worthless!  For starters, you actually can attack with it and it does surprisingly great damage, but you have to be absurdly close to the enemy to hit them with it.  Better yet, if you’re holding 15+ hearts, you can use the key’s item crash, which grants you a small moment of invincibility and doesn’t actually consume any hearts!  It takes some getting used to, but it’s an entirely viable tactic. 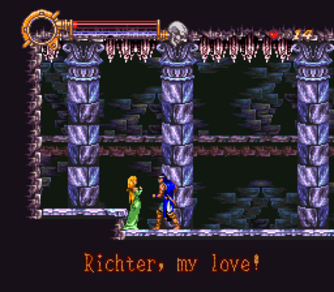 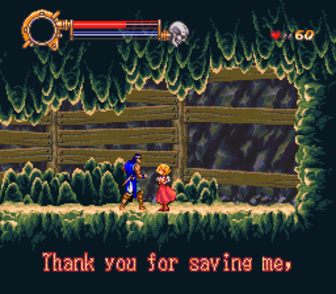 In addition to the normal Castlevania story of the Belmonts vs. Dracula, this one adds an extra wrinkle by having Dracula kidnap some local girls from Wallachia.  Two of those girls happen to be Richter’s fiancée, Annet, and her little sister, Maria.  Longtime fans of the series likely recognize the latter as Maria Renard, who appears in many other Castlevania titles.  Unfortunately, upon rescuing Maria, she is not unlocked as a playable character like she was in Rondo.  Depending on whether you rescue zero, one, or two of these hostages, you will see one of three aforementioned endings once you best Dracula. 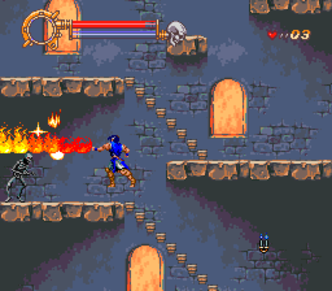 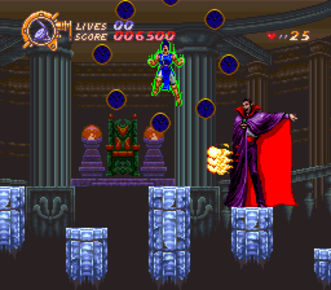 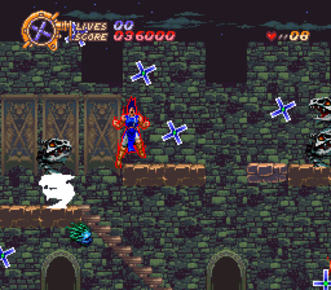 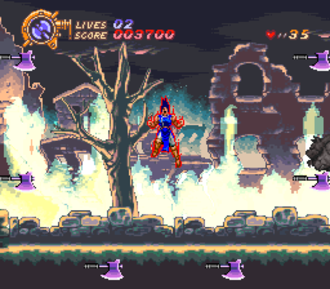 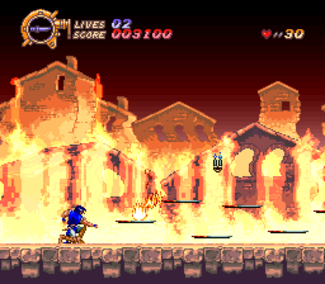 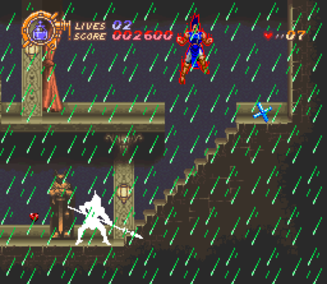 This gameplay is different in this game compared to previous Castlevanias.  If you are a veteran, you’ll immediately notice the lack of Mystic Whip symbols to power up your whip.  This works in your favor, actually, as Richter’s Vampire Killer is always in the long morning star mode.  There is a way to further strengthen it, though.  More on that later.  Richter’s subweapons are also more functional (generally) than previous Belmonts’ were and, thankfully, picking up a new one doesn’t immediately get rid of your old one.  It will replace it, but Richter drops your original sub and if you prefer it, you can easily scoop it back up.  Richter never needs Double Shot or Triple Shot icons, rather he can much more freely use his subs.  Honestly, my favorite is the dagger.  I like how Richter throws three with each press of the button and they are quick and long ranged.  In many entries in the series, Daggers are placed in such a way that you try to avoid them while making hectic jumps, but I don’t mind having them most of the time.  Now the Holy Water is another story.  Holy Water used to be the perfect weapon for pinning an enemy down and quickly and easily defeating even the most difficult bosses.  Unfortunately, in this outing, Holy Water travels forward upon impact, instead of staying on the enemy and dealing constant damage.  Having said that, Holy Water has an amazing Item Crash.

Item Crash?  This marks a significant change from previous games.  Indeed, to this day, fairly few Castlevania games enable their heroes to perform this action.  In exchange for a large amount of hearts, Richter can use a super attack, unique to each weapon, or even no subweapon at all!

Castlevania veterans can tell by this screenshot that this must be the final level.  Note that it is only Stage 7. 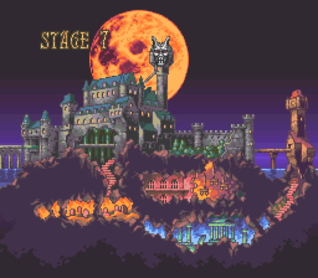 This game has a grand total of only 9 stages, and only 7 of them are playable on any given trip through the game.  It is clear that they were at least attempting the branching paths of Rondo, since there are two alternate stages (down from 4 in Rondo), but even with this variety, the game is still very, very short.  Don’t get me wrong- it is incredibly enjoyable, but I wish it lasted longer.  To an extent, this is true of all the classic 2D action-style Castlevania games, but consider that the very first Castlevania had 6 stages and all these years later, we only have a single stage more than that (and significantly fewer than the 11 in Super Castlevania IV), and you really notice just how short this game is.  Thankfully, there is some replayability to the game with the earlier mentioned alternate stages.  Additionally, there are actually 3 endings to the game, so that does add some life to the title.

Music is truly the lifeblood of the Castlevania series.  In that department, this game shows off that typical greatness, though there is very little by way of original music tracks.  Still, I don’t mind the nostalgia of listening to classics like “Bloody Tears” while whipping my way through Wallachia.  There is some debate among fans as to whether Rondo or Dracula X sounds better.  Either way, the music in this one sounds great.  Unfortunately, the amount of music is lacking in this game, which is indicative of another problem as well… 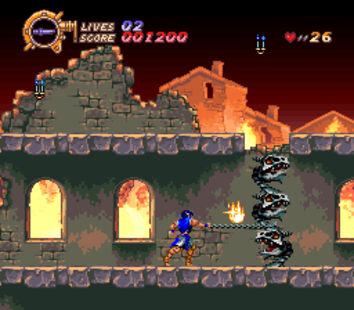 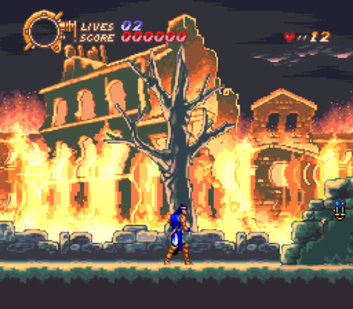 Graphically, this is a very impressive SNES game.  It certainly has that Castlevania look to it.  The colors are dark and threatening.  The sprites are quite large for the time.  In fact, many of the sprites used in this game are taken directly from Rondo and are used in many other later games in the series.  One of my favorite aspects of the Castlevania series is how enemies die.  Unlike most games where enemies simply disappear upon defeat, this series is renowned for including many unique death animations for the monsters.  In many games, you’re lucky if the bosses do anything other than vanish, but here, even regular enemies perish spectacularly! 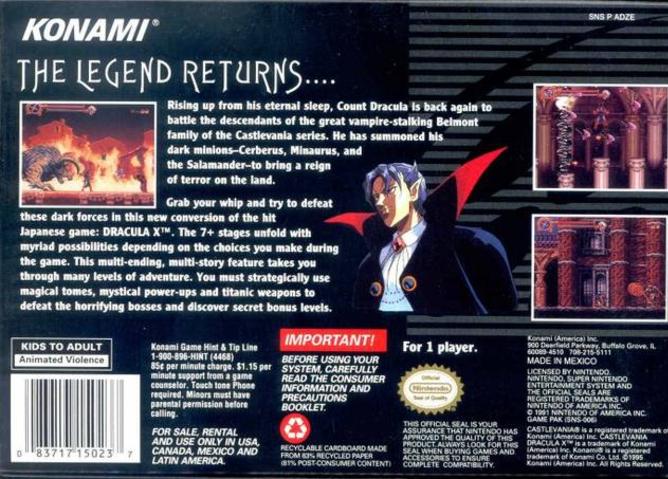 This game is often unfairly maligned.  Some of that blame rests with Konami itself for using the box art of the Turbo CD game, Castlevania:  Rondo of Blood.  They placed an unfair burden on this game by implying that it is Rondo of Blood (even though they call it Dracula X here).  To clarify, no, this game is NOT Rondo of Blood, but that certainly doesn’t mean it’s a bad game.

Ok.  That is pretty cool.  While this is certainly not unique within the series, the castle depicted on the box is clearly patterned on the real life Bran Castle, located in Wallachia (if you are new to Castlevania or the story of Dracula in general, you’ll want to remember that name.  It’s important).  I appreciate this attention to detail and this is a series that is famous for that. 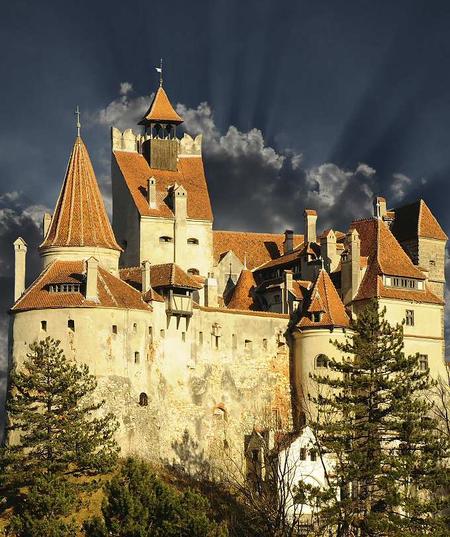 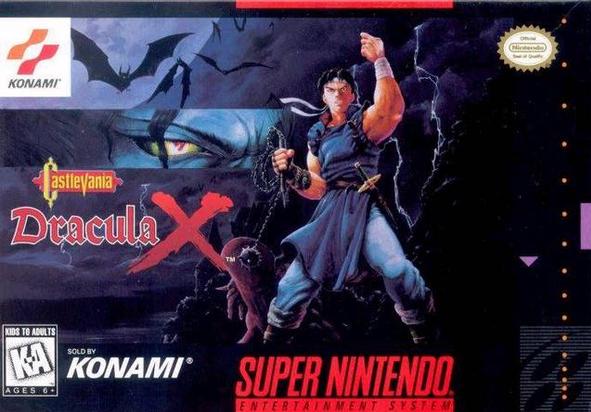 Let’s check out that box art.  Wait a minute…  Take a closer look at that castle.  It looks familiar…

Welcome to Zero Sum Gaming, here at The Culture Cache!  This is the maiden voyage for this section of the site and to my surprise, we have already received a donation of a physical game!  We truly are surprised and humbled by this!  I give my most sincere thanks to Nathan of Knoxville, Tennessee for donating this game, and luckily, Castlevania is my favorite series in all of gaming, so it seems appropriate to start with a little something from it.  For this inaugural article, let’s examine some aspects of one of the black sheep of the series:  Castlevania:  Dracula X.