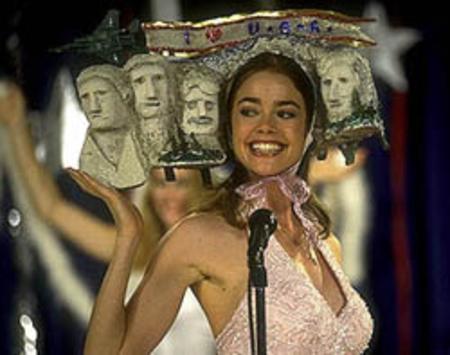 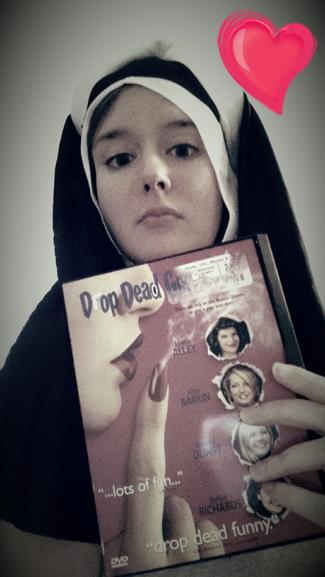 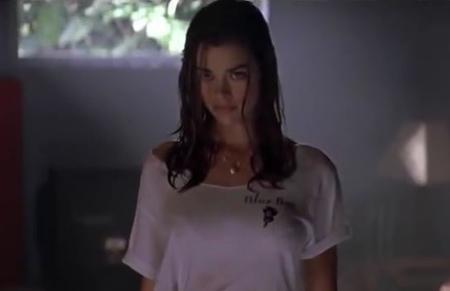 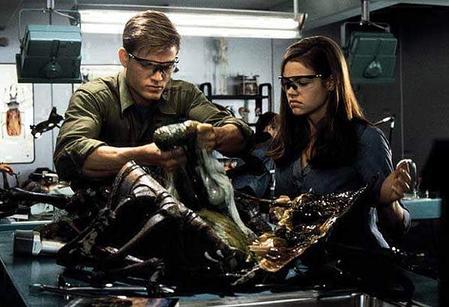 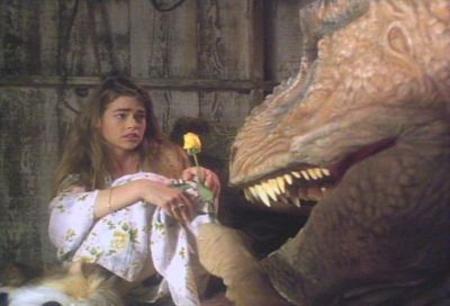 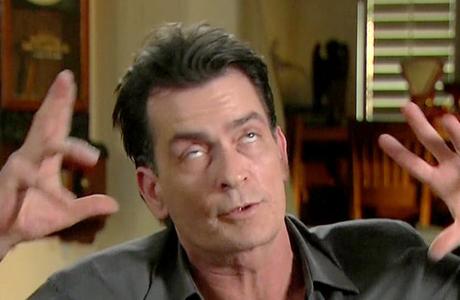 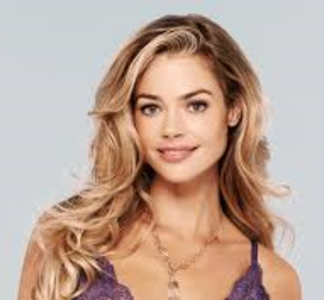 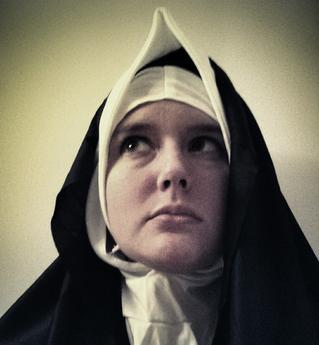 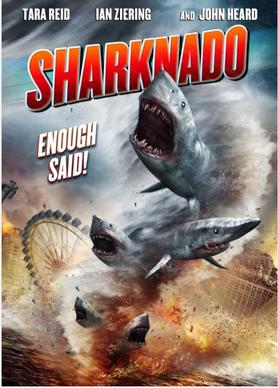 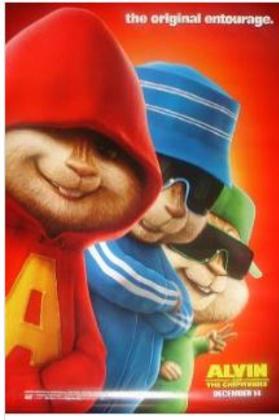 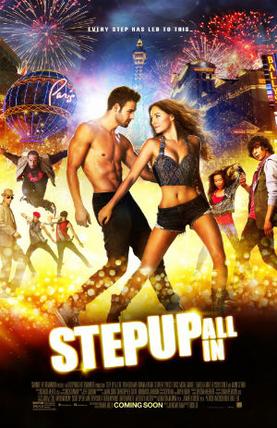 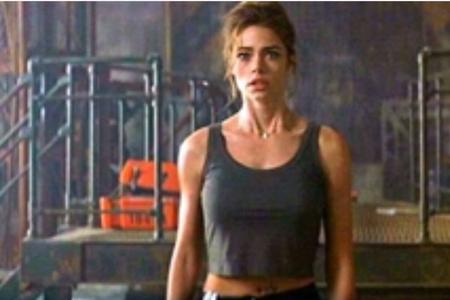 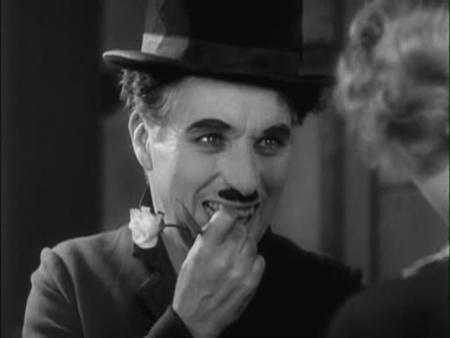 So now, in light of this performance, let's forgive Denise for her transgressions. I know it is difficult, but perhaps we can pray that Denise will age into a solid role.

It would take a miracle.

Denise Richards' sins are widespread, but she appeared in one of the best satires of the late 90's--a little film called Drop Dead Gorgeous. In this scathing lampoon of beauty pageant culture, Denise plays a beautiful but spoiled rich girl whose mother, the former winner of the small-town beauty pageant in Minnesota, will stop at nothing to make sure her little girl gets the crown--even if she has to kill. This is the type of movie that works in Denise's favor. Her acting skills have not improved much, but within the context of this film, her turn as the vapid teen beauty queen who needs to appear demure to the general public is just the right mix of cute and sinister. For once, it does seem as if Denise is in on the joke. She actually GETS the dark humor of this movie and is able to deliver accordingly. She really shines in the Q&A scene, where her character, Becky, uses her answers to plug the family business. Her brilliant smile encompasses all things glamorous and evil. There's also the talent portion--which I am not going to spoil for you here. Let's just say it made Sister Mary blush, but I cannot lie--I laughed.

One day, Hollywood decided Denise was attractive and vapid enough to become the ultimate celebrated arm candy. The status of Bond Girl has become a sort of rite of passage for a very specific type of actress. She obviously had to be beautiful in an intimidating sort of way, but she couldn't quite be an A-lister either, lest she steal the thunder of James Bond himself. Denise hopped on the bandwagon during the Pierce Brosnan era, playing the "good" Bond Girl alongside her stunning foil, played by Sophie Marceau. She was given the unfortunate character name of Christmas Jones (you'll see why in a minute, if you don't already know). Denise's complete lack of range as an actor was perfect for the formulaic nature of the franchise, but all it did for her was remind everyone just how talentless she really was. Finally, while this was not her fault, she will forever be associated with one of the worst final lines in the history of cinema. While in bed, Bond whispers seductively, "I thought Christmas only comes once a year." Fade to black. That's terrible even by Bond standards.

So here we have multiple examples of ways in which Denise Richards stunk up the film industry in the 1990s. Is there any redemption for her? Has she contributed anything memorable or worth watching?

I spoke with Sister Mary Thespis on the subject, and here's what she had to say:

This movie is sensationalized quite a bit due to its sexually charged nature, highlighted by a famous three-way and a fake lesbian swimming pool encounter. Denise is doing what she knows best here--steaming up the window panes, seeming indifferent about the fact that  it's nothing but transparent glass underneath. Why should she care when the audience doesn't? Do a simple video or image search of Denise Richards in this film, and you will see nothing but sexual images. Yes, it fits the tone of the film, but it showcases my issue with her as an actor--she's got nothing to back it all up. There are plenty of hot actresses who actually have chops. When the stakes grow higher in this film, Denise  gives us nothing. When her character is on the phone scheming with Matt Dillon near the end of the film, she glances through the window shades to show her paranoia, then proclaims, "But what if they find out? My God, they'd put you in the electric chair!" with a tone that would be more appropriate if she were asking him to pick up a gallon of milk on the way home. I find it amusing that, right before this moment, Dillon's character instructs her to calm down by "taking one of her mom's Valiums." Pretty sure she already did that, buddy...

Exhibit D: The World is Not Enough

Yeah, I suppose you could argue it was her moment to flash those pearly whites, but it really looks as if she's struggling to think of her next line. When she finally gets it, it looks as if she read it off his jersey--like Marilyn Monroe before her, reading script pages taped inside dresser drawers.

We have now discussed two horrible movies, and it would be fair to say that poor Denise was a product of her environment. Let's look at one that exceeds the others in sleaziness, but makes for at least one semi-decent popcorn viewing.

In this scene, students are dissecting giant insects while an instructor tells them how highly-evolved these creatures are. Eventually, the entrails make Carmen, Denise's character, vomit. Now, granted... Denise didn't have much to work with here. "Here's a disgusting creature. You will slowly become nauseous and add your lunch to the gross-out display." Fair enough... but for that line, the one in which Carmen argues, "But humans have created art, mathematics, and interstellar travel." Here we have the classic Denise Deadpan. I think one of the dead table bug filets could have delivered it with more gusto. In another scene, the dreamy quarterback asks her what she's doing after the game. Her response is a pregnant pause and a look of utter perplexity:

There's a phrase about being young and needing money. I hope to God Denise invokes this phrase when someone tries to bring up this movie. It is by far one of the worst things ever put on film, and not even tongue-in-cheek enough to be charming. I could write an entire, separate article on what a piece of garbage this "film" is, but let's focus. Here, we see the beginnings of Denise's technique--wooden delivery, piss-poor timing, awkward coquettishness, and a constant sense that she is never completely aware of what she is saying or doing. It doesn't help matters that she is riding (and making romantic comments to) a badly-constructed tyrannosaurus rex that is the reincarnation of her dead boyfriend (portrayed, eerily enough, by a young Paul Walker, who at least showed a bit more range in his short career) and working from a screenplay that would make Tommy Wiseau weep.

There are no words to properly illustrate how much I loathe this movie. Filmmakers took a 1950's sci-fi novel and transformed it into a feces-ridden imitation of Ender's Game.

But...  seriously...  let's take a look at a bit of the filmography and her screen presence.

Exhibit A:  Tammy and the T-Rex

Her Sins: Tammy and the T-Rex, Starship Troopers, Wild Things, The World is Not Enough, *Charlie Sheen

Ah, Denise. Sparkling smile, long, shiny tresses...  wooden delivery, hazy eyes, a seemingly dubious aura at all times. She's the kind of girl one's Southern mother would glance at and remark "Bless her heart...  it's a good thing she's pretty."  I try really hard not to tear down females in the industry, because the industry does that enough for all of us. We're not here to discuss her as a person, because that would require us to discuss Charlie Sheen. And really, who wants to do that?

Meet Sister Mary Thespis. She has been called upon by the Almighty to forgive the worst actors on earth based on one performance--one shining beacon in the cesspool that gave us some glimpse into what COULD be.

By 2015, countless actors had committed egregious sins against art. Was there any hope of redemption?

But let's look beyond the blockbuster. Somewhere, buried deeply within all the rubbish, we still need film. 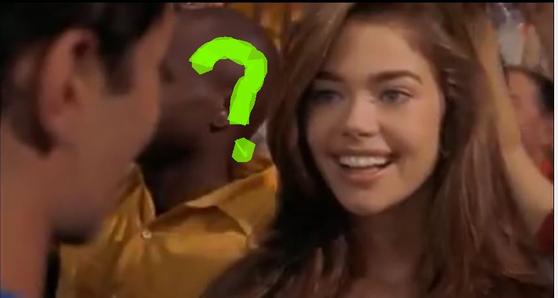 Painfully unfunny comedies, flimsy dramas, and reboots galore ruled the box office.. A trip to the movies had been reduced...  to this: