In spite of all this, it is always healthy to fully examine and question the choices of even the artists we admire. Unfortunately, for all his strengths as an actor, MacLachlan has made his mistakes. (P.S. I’m not including The Flintstones. That shit was funny). And Kyle doesn’t have MUCH to answer for, but he has not one, but TWO black marks…two film roles that require consequences. Yes, that’s right…it’s time for a Cinematic Punishment... 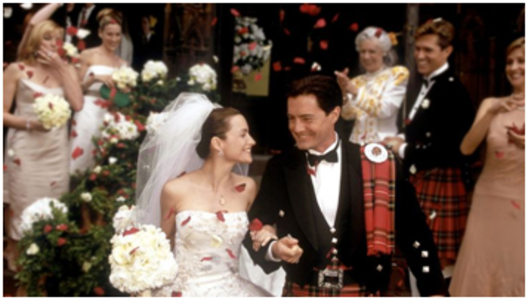 Transgression #1—Sex and the City 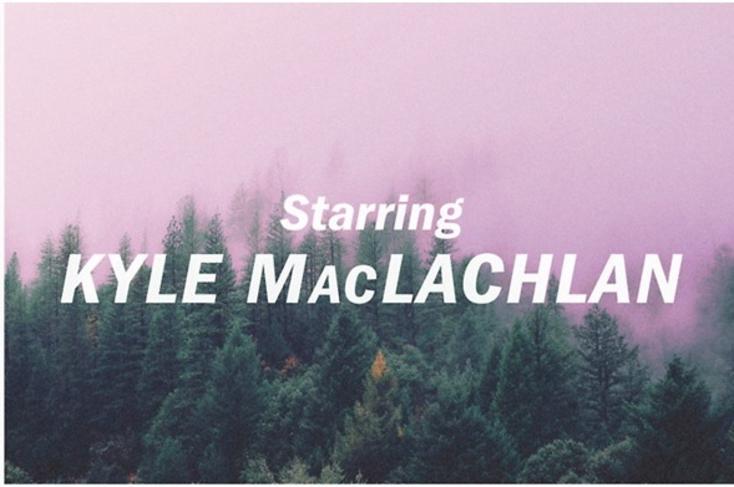 I know I am not alone when I say that, as a fan of Twin Peaks, the return of Special Agent Dale Cooper (who had, up until that point, been trapped in a sub-dimensionally-induced stupor, living the manufactured life of a man named Dougie Jones) from his coma was one of the greatest moments I have ever witnessed on a screen. Even in the more bizarre moments of The Return (of which there were many), seeing Kyle MacLachlan deftly and effortlessly maneuver through different personas was an absolute treat—very much a testament to his abilities as an actor. It became clearer than ever that Agent Cooper is one of the most beloved characters in all of television. It was MacLachlan’s ability to balance tenacity and intellect alongside an almost childlike sense of wonder that won so many hearts in the early 90’s and brought them back for The Return. In the new series, we also got to see Coop’s dark side, and Kyle delivered. He avoided giving us a Snidely Whiplash version of Coop and instead portrayed a creature whose essence gave us some inkling of just how dark the Lodge could get. All this to say…Kyle nailed it. 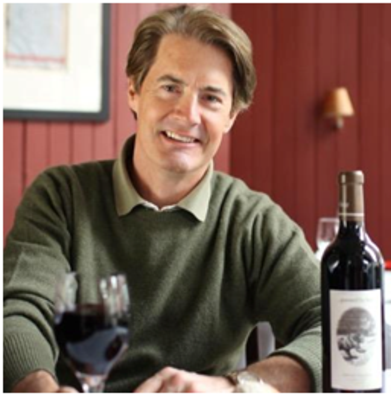 Ok. Everyone makes mistakes. But this was a big one, Kyle. You are hereby sentence to 25 more years in the Black Lodge.

Ok, so looking back at the evolution of his character, I am fairly appalled at how bad it actually got. His character was the first husband of good girl Charlotte, the “Park Avenue Princess.” What was, at first, portrayed as a storybook romance between the two became an embarrassing, poorly-written examination of male impotence, punctuated by Trey’s unhealthy attachment to his rich, overbearing mother named Bunny (yes that was actually her name). The storyline got increasingly cringeworthy before finally culminating in Charlotte and Trey’s divorce. Tearing down the concept of the “fairy tale” relationship was common on this show, and while there had been sloppy attempts before, there was something really distasteful about seeing way MacLachlan was reduced to an obnoxious caricature. 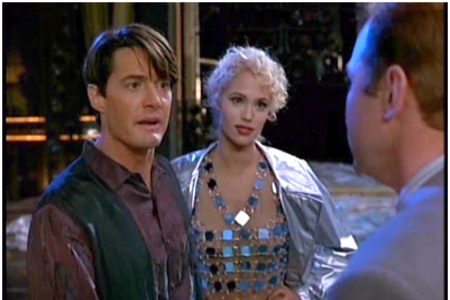 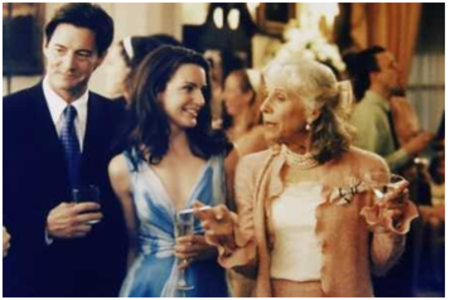 Although there are only two transgressions covered here, the weight of the latter, Showgirls, is especially egregious and really deserves quite a bit of punishment. Kyle himself seems to corroborate this: 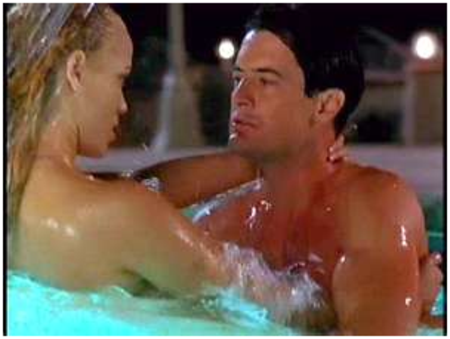 “We all went into it with absolute conviction. Had we gone into it thinking we were making a camp classic we’d have ruined the camp element. It had to be taken seriously as we were filming it. Only when it was assembled and I saw it for the first time, I thought: ‘Oh boy, this isn’t going to be pretty…..Everyone has their Showgirls.”—Kyle MacLachlan, Metro, 2012

Despite making history as the first and only film rated NC-17 to receive a wide mainstream release, this film has become synonymous with regret. It is the film that made Elizabeth Berkeley a name outside of Saved by the Bell—though probably not one she wanted. MacLachlan appears as the sleazy entertainment director of the topless nightclub at which Berkley’s character, the drifter Nomi, works as a dancer. They have a really dirty and surprisingly acrobatic pool sex scene that has launched many a gif.

Confession: I used to watch this show (sorry, Sister Mary Thespis). There was something almost comforting in how vacuous and daft it was. Occasionally I have been known to let it play in the background, because there are a handful of genuinely funny moments. But oh…Kyle’s character…