If you just couldn’t get enough character building hack ‘n’ slash gameplay, then you’re in luck!  Marvel Ultimate Alliance is functionally “X-Men Legends III.”  So grab three of your closest friends (preferably when they’re not looking), and strap in (IN, not ON) for some more dungeon crawling goodness!  The gameplay is remarkably similar to X-Men Legends II, but I really miss Gambit.  Still, there are plenty of other great characters for the 3 poor bastards playing with you unlucky enough to have not selected Deadpool.  But make sure you get the correct version.  Unfortunately, each platform has a slightly different roster of characters.  Bastards…  And even worse, there were 8 characters hiding behind the DLC money wall, but they’ve since been taken down.  I don’t know which is worse, having to pay an extra 10 bucks to have all the characters or not being able to have them at all.  Oh well.  At least this game is cheap and easy to find.

That’s weird.  The first two games in this series used Roman numerals, then the third one reskinned the series to encompass all of Marvel.  Fair enough, but why, then, did they switch to Arabic numbers for the fourth game?  The world may never know…  This game does some things right (welcome back, Gambit!), and some things wrong.  Honestly, it’s a bit of a backslide.  The gameplay is noticeably dumbed down from previous entries.  It’s cool how characters have unique fusion attacks, but it’s not enough to save the game.  If you’ve enjoyed the other three, you’ll still have fun with it, but it’s much simpler, and it worries me for the future of the series.  The story is great, though.  When anyone asks you which side you would choose in Civil War, this game literally offers you the chance to put your words into action.  Team Cap all the way, baby!

Now we’re getting to some really good stuff!  As you, no doubt, are already aware, I’m a fan of fighting games.  If you didn’t already know that, go ahead and click that link I painstakingly provided for you.  Go on.  What are you waiting for?  All caught up now?  Good.  This is a fantastic game and it does an excellent job portraying a myriad of characters you know and love.  We finally get the answers to such age-old questions as, “Who would win in a fight between Viewtiful Joe and M.O.D.O.K.?”  But we already know the answer:  Deadpool, obviously!  He’s a really fun character to use.  He’s wily (no, not Dr. Wily) and has lots of fun tricks up his sleeve.  And, importantly, Capcom made it a point to portray him correctly.  Deadpool’s animation for walking backwards is Moonwalking, for example.  His taunt uses his iconic yellow speech bubble and even deals damage.  And his dialogue is perfectly suited to the character.  Even his Level 3 Hyper Combo lets him beat his opponent to death using the on-screen meters.  Priceless!  And for the record, I mained Deadpool years ago (along with Captain America [Team Cap all the way, baby!] and Arthur).

I know the characters are pretty small in this game, but that’s Deadpool.  You’ll just have to trust me.  Or don’t.  Either way, that’s him.  This game does a good job tacitly showing one of Deadpool’s character arcs.  He’s actually a villain in this game, but he is unlockable and ultimately fights alongside the X-Men.  It’s a great way to mirror his introduction as a villain in the comics and his slow progression to anti-hero.  I don’t think you can truly call him a hero, nor would he want you to.  Still, in this game, he is basically bonus content and he’s not quite as fleshed out as the other characters.  But this is one of only three games I’m aware of to feature both Deadpool and Gambit as playable characters, so it gets major bonus points for that.  It’s a fun dungeon crawler with RPG-like character growth and it’s great fun. 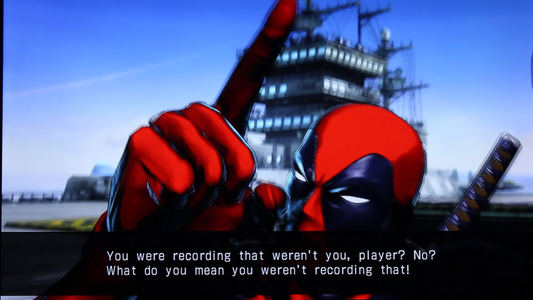 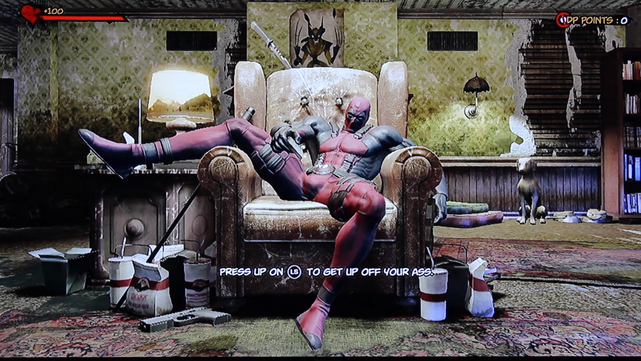 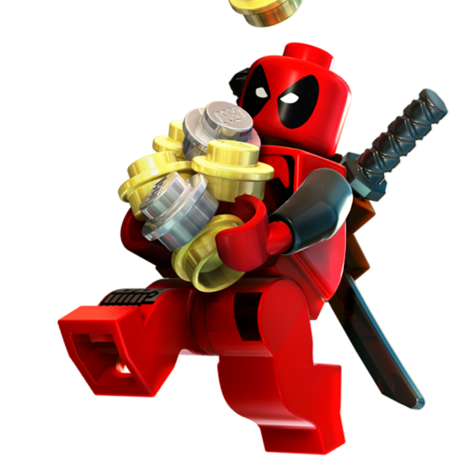 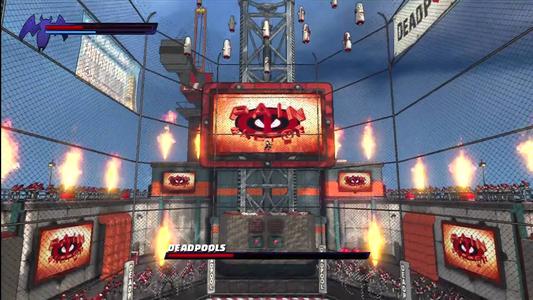 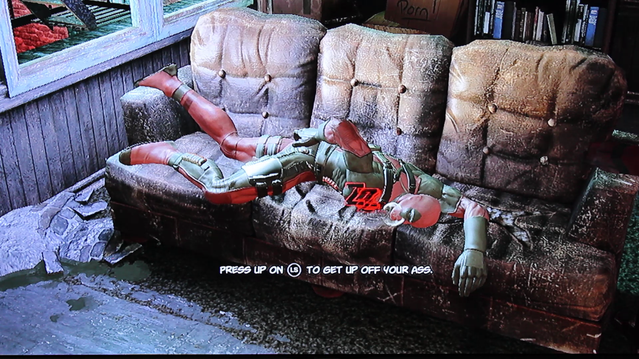 Welcome back to Zero Sum Gaming, here at The Culture Cache!  Hopefully you’ve enjoyed this Deadpoolicious week and you’ll enjoy the next one even more so!  As much as I’d like to say, “We’re so cool that we just decided to spontaneously cover Deadpool,” I’d be dishonest in doing so.  Oh well.  I’m going to say it anyway.  We’re so cool that we just decided to spontaneously cover Deadpool.  But the real reason we’re doing so is because longtime Patreon donor, Chip, wanted to see how a single character was depicted across comic books, movies, and video games.  While that part was his idea (thanks, Chip!), we did decide on the character ourselves.  So grab a few chimichangas (but don’t spill any on the screen, you pig!), snuggle up close to Cable (or maybe Thor, what a hunk!), and wade through (yes, I said that.  No, I’m not taking it back.  You can’t make me) the ups and downs of some of Deadpool’s video game appearances.

Ok, this one is a stretch, I know.  This is Wadey Wilson, but that’s close enough, I guess.  This entire segment of the game is gold, though, as Ultimate Deadpool ends up with his own TV show, Pain Factor, a thinly-veiled (and infinitely more watchable) version of Fear Factor.  If you’re a fan of various iterations of Spider-Man and just can’t decide which one you want to play, then this is the game for you!

Who doesn’t love the Lego games?  Anyone who raises his hand gets a bullet to the head.  *BANG*  Anybody else?  I didn’t think so…  This game is one of many popular IPs to get the Lego treatment.  They’re great games to introduce young gamers to the hobby, since you can’t really lose them and the violence is greatly minimized through the use of Lego pieces.  As far as Deadpool’s part in this game, he is playable, but he’s not really all that important to the game.  I do like how the Power Bricks are directly tied to Deadpool (and you unlock him by finding all of them).  You’ll have a good time with it.  Obligatory BS DLC tactics continuing to squeeze blood from my stones (hands off the merchandise!)…

I know there are a few other games that include Deadpool that I didn’t mention, but I haven’t played them, so it really wouldn’t do me (or you) much good to include them.  But hopefully I’ve given you enough ideas to satiate your lust for some hot DP action.  Find a fun Deadpool game or two, or seven, to keep your skilled hands busy.  As for me, I’ve got to track down a mouthy merc who may have just teleported away with my favorite action figures.

I think I have this game figured out.

What’s wrong with this picture?  Other than everything, this really isn’t so bad.  Seriously, did they ever read a single comic containing Deadpool before they came up with this month old goat placenta, er, I mean character design?  Granted, it’s not really the game’s fault.  It used the same design from the movie, but what were they thinking when they came up with this?  The product of a drunken one-night stand involving Cyclops and Baraka (nevermind that they’re both dudes.  Just roll with it)?  That’s the perfect portrayal of such a beloved character!  Surely nobody will complain about this!  Yeah, I know.  It’s low-hanging fruit, but I still have to say it.  Besides, I’d be remiss not to bring up Deadpool’s low-hangers at least once during this article.  In fact, he refused to be a part of it if I didn’t!  Anyway, the game’s not that bad.  It’s a pretty standard fare button masher, but it’s fine for what it is.  Though it does lose points for Deadpool being the last boss and not a playable character.

Whoops!  I haven’t finished this game yet, so I really shouldn't comment on it too much.  But I can say this.  It’s Deadpool’s very own game, so you know it has to be great, right?  Right?  Don’t make me shoot that guy who hates Lego games again! 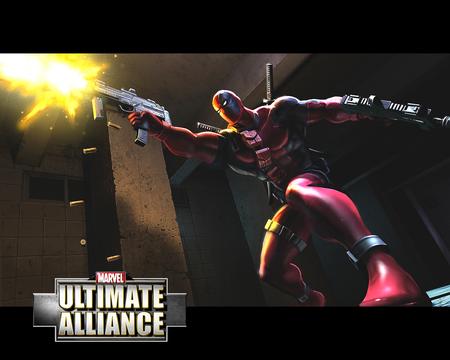 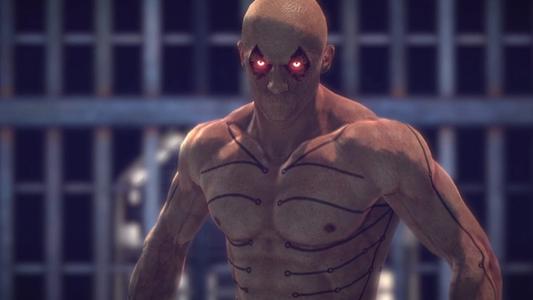 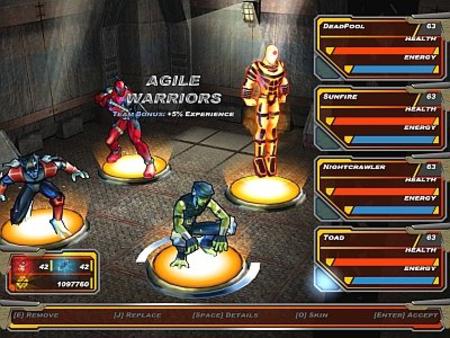