--A bizarre reenactment of basically every episode of the original, calling it out for its excessive cheesiness. I am so confused by the tone of this thing so far. 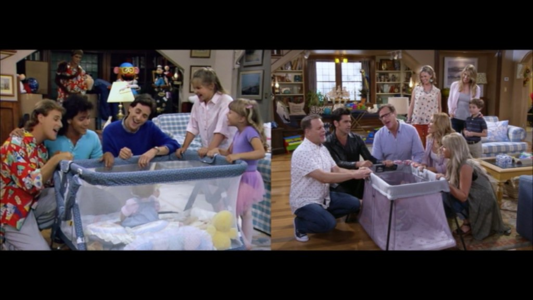 --Was it really necessary for DJ to actually put her name in EVERY section of the chore chart? I thought she was the "practical" one. 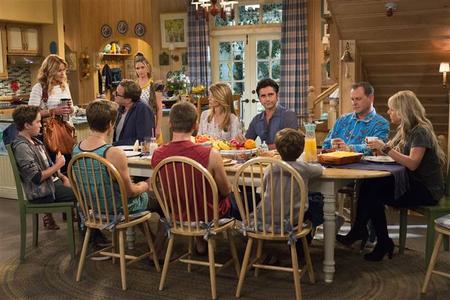 --Aunt Becky. She looks even better than she did on the original. Dammit, Stamos and Loughlin, why haven't you made real-life beautiful babies already? Snap to it!

--Twenty-second New Kids on the Block dance-off. That just happened. Did it blow your mind? It did mine.

--Ok, so apparently they're all crashing here for the weekend. It feels like a reunion because it IS one. Well-played, FH. 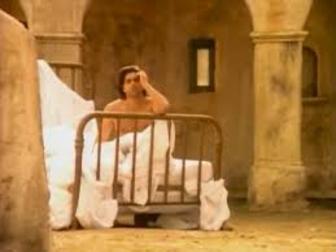 --There's something really creepy about DJ's middle child, Max. It doesn't help that he dresses like a ventriloquist dummy.

--Ok, Steve eats a lot. Why is this a thing? He's clearly not fat. Is he perpetually stoned? Is that the joke?

--"I've got my music...this is why I don't spend time with my nephews." Let's go ahead and establish Stephanie as the villain of this piece. I mean, look at the BOOBS!

--This Max child is grating my nerves. STOP YELLING EVERY LINE. An Olsen, you are not. 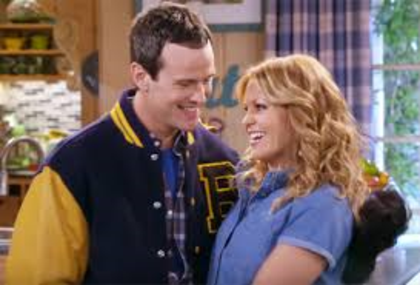 --Haha. They all have cell phones. It's funny because...it's the Tanners! Get it?

--OK, I GET IT NOW! DJ is Danny, Steph is Jesse, and Gibbler is Joey. Brilliant! The Disney direct-to-video premise is complete! 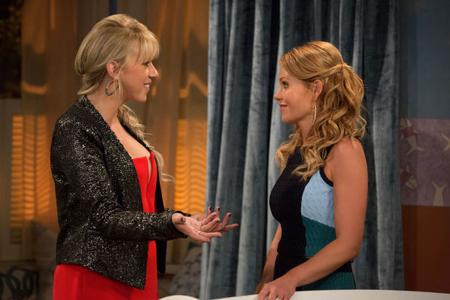 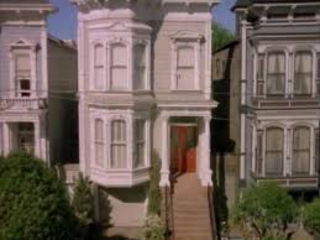 --When did Stephanie Tanner become gorgeous? That said, I do hope the British accent thing is not sticking around. Not working.

--Everyone looks at the camera to judge the Olsens for not being on the show...for 30 seconds, it seems. Way too long, really too self-satisfied to be funny. I do wish they'd lay off the Olsens. So what if they don't want to drop their successful business to mimic their five-year-old selves? Are you also expecting a reboot of How the West Was Fun?

--Precious opening, but I don't like the nasally, Disney Channel-esque cover of the theme song.

--They just managed to make a semen joke as corny as possible. Yes, there was a semen joke.

Wait.  What if Danny Tanner was Bob Saget...?

--"My husband died doing what he loved." Wow, way to casually drop that bomb. Yeah, I get it--it was in all the ads. But still, she's so smiley about it, and doesn't even use his name. And...wait a minute...she didn't marry STEVE! He's in the intro!

--There's the table. They STILL have that gingham pattern on the seat covers? Oh, and there's a BABY! 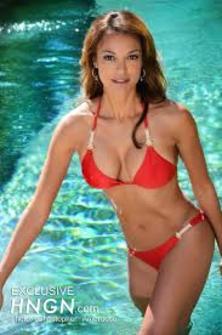 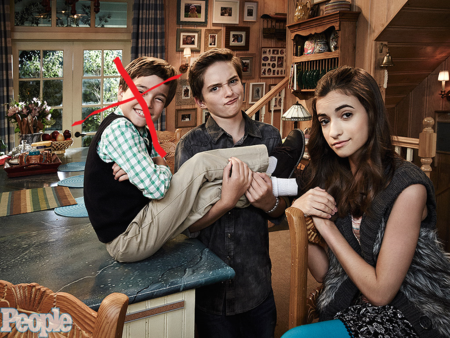 --Nikki and Alex are models, too. Dang, there is too much pretty happening.

--Oh, the clunky exposition is killing me.

--DJ is apparently trying to force her son into an arranged marriage with the Gibbler child already. 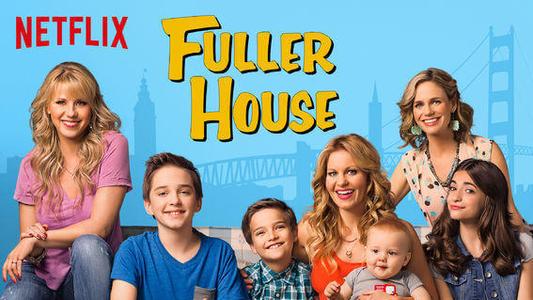 --The damn woodchuck is back. Yes, of course the baby is crying. That thing is horrific.

--Joey goes into Bullwinkle voice and makes fun of Jesse for clinging to the Elvis gag, claiming it is "childish."  I like the self-deprecation so far, FH.

--They actually did a split-screen reenactment. Oh, that hair...

OPENING: Well, no apologies or pretention here. They are using footage from one of the original openings--Baby Michelle and all-- and the theme song (which is now competing with the Hamilton soundtrack as my current earworm). Ah, and there's that stoop....and the caption "29 Years Later" (suddenly I'm 100 years old). 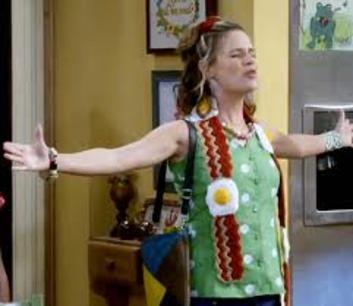 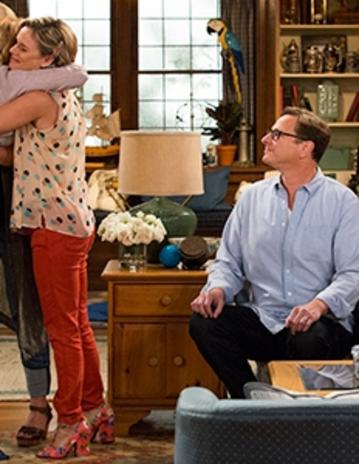 --It's really sweet that Stephanie wants to immediately drop her whole life and stay with DJ after hearing the baby monitor breakdown, and I shouldn't question a sitcom, but if her life was as involved as she made it sound, this is a BFD.

--Stephanie's dress...fuller house, indeed. I don't think the Tanner house has ever seen this much cleavage.

--Ok, Kimmy Gibbler should still be obnoxious, but now she's coming off as a little psychotic.

--Comet Junior Junior. Hate the name, love that they kept a gorgeous Golden on the show. 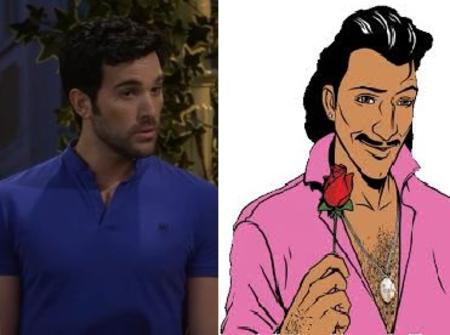 --Gibbler is raising her child to be a creeper and a freeloader. Awesome.

--Deej, you have been onscreen for less than two minutes, and you're already as uptight as I always knew you would be!

--Uncle Jesse just agreed with me.

--Steve, after less than two minutes in the room, offers to "be there" for DJ when she's "ready." Well, that escalated quickly.

--DJ just subtly shamed Stephanie for not having children. Classy.

-- Danny Tanner pops up from behind the counter. Canned studio audience goes wild. Cute reveal. Why was he on the floor? Oh, apparently he dropped a piece of bread. Danny's mellowing in his old age (is it bad that I want to see Bob Saget break into one of his filthy stand-up routines to entertain the baby?).

--And Kimmy divorced a gay version of Fernando from GTA: Vice City. No really--that's his name. And he has the same voice and characteristics. Cannot be an accident.

--Just like old times--all three men walk in at the same time to see what shenanigans the sisters have gotten into.

Along with other millennials around the globe, I succumbed to the nostalgia beast today. I watched Fuller House, the continuation of TGIF mainstay Full House. When I first heard Netflix was doing this, I wondered how it would catch on. Could the saccharine-laced family comedy survive in any form in 2016? Would it be more than an extended, winking joke? Are they REALLY in the SAME house?

I will set aside all this speculation and share with you my immediate reflection on the first episode. Here is where I will determine whether or not it will be a binge-watch, a nostalgic slow burn, or something to run screaming from. Here it goes.

Another episode? You got it, dude.

--The Oikos God himself, Uncle Jesse, just came down the stairs. Twenty-five pairs of panties come flying toward the soundstage. Well, not really, but you get the idea. He holds his next line until the studio audience of banshees settles down.

--So, when exactly DOES Kimmy plan to tell her daughter she is uprooting her life? Did she REALLY just tell DJ not to reveal that little tidbit?

THE VERDICT: Captures the spirit of the old show. The tone is still uneven, but it has to find its footing. If the goal is pure nostalgia, one season will be more than enough. I'm interested to see how this will play to a new audience.

--Ok, we get it. Trump is a dirty word. Space your jokes out a little better. 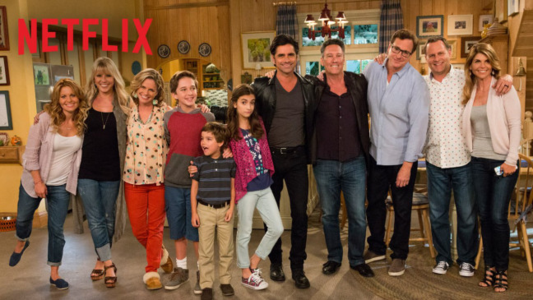 --"FOREVER." Yep, it happened. Fail on them for not intercutting the music video. (Also, why did Stephanie force Jesse to sing it, then start singing with him? How rude).

--Only on a Full House spinoff would the entire family gather around to listen to a post-partum breakdown via baby monitor.

--Steve and Deej--just make out already.

--Ah, he bought the baby an Elvis onesie. Fat Elvis, that is.

--SUPER-ICKY exchange between Gibbler and Danny about Kimmy peeping into Danny's bedroom window on a regular basis, followed by a hug. If this becomes a fanfic, I don't want to live on this planet anymore...

--THEY'RE SELLING THE HOUSE! NOOOO! Go ahead and save the house, Deej. You have less than 30 minutes!