Whoops!  I’ve shown too much already!  Stay tuned for the follow-up video next week… 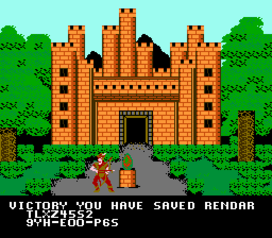 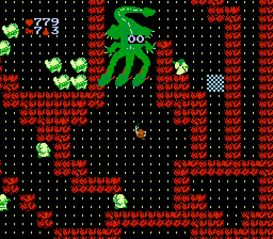 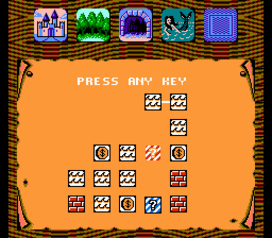 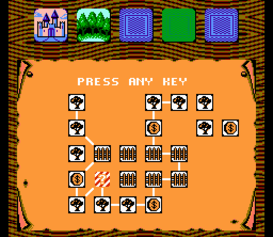 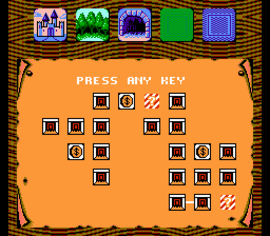 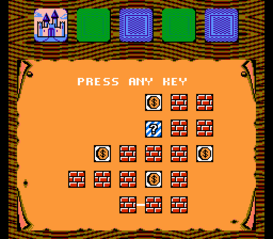 As stated above, there are 100 levels in this game, divided across 5 different realms.  Don’t worry, you won’t visit every level every game, although it’s easy to get lost and repeat some of the levels if you don’t know what you’re doing. 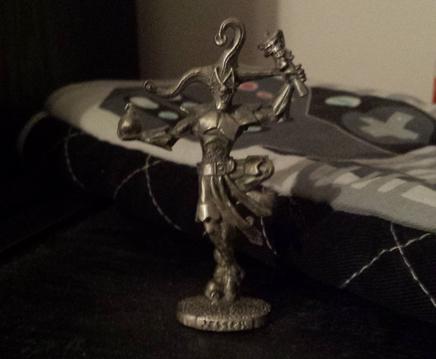 These are the only 4 playable characters in the NES Gauntlet, but others have been added over the years, such as (my favorite in the entire series) the Jester.

Finally, we come to my favorite character of the bunch.  It’s funny.  I arranged these characters in the order of their respective coin slots (no, not that one!) on the arcade cabinet, but they actually go in order from my least to my favorite character.  Questor’s name is derived from an old Roman position of power, usually having to do with money or prosecution (money influences court decisions?  The Hell you say!).  He’s a bit squishy, only able to blunt 10% of damage with his armor, but as the game proceeds, he goes from having the second lowest health, to ultimately having the most, so that does help somewhat.  Sadly, like Thyra, his hits are incredibly weak, so he is somewhat functionally similar to Merlin in that neither of them should really be fighting on the frontlines.  His magic is quite good, second only to Merlin, so he can use that to get out of a pinch!  Finally, his biggest asset, by far, is his speed.  He can literally (and easily, in some cases *cough* Thor *cough*) run circles around the other characters.  This negates almost all of his negatives!  HP constantly dwindles, but if you can finish many levels in seconds flat, you retain more of that HP.  If you’re not going to be able to win a fight and the enemies will overwhelm you, take a page out of Brave Sir Robin’s playbook and run away! 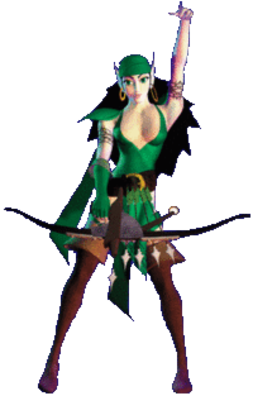 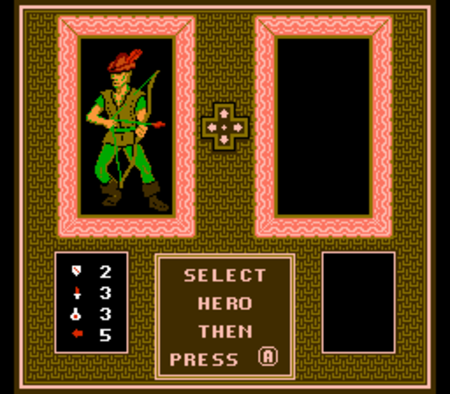 Meet Merlin, another wizarding prerequisite name from back then.  Now I suppose his name would be Harry, Severous, or Albus.  It is interesting to see the name schemes for these characters.  Merlin was one of King Arthur’s chief aides (I hear that aides are also a great way to lose weight).  As is tradition, Merlin has pitiful armor, taking full damage from every hit.  This compounds with his health, which is dead last all the time.  The screenshot above only lists 4 stats, though in reality, there are 7.  The fight score, for which Merlin has a 3, only tells part of the story.  His shot stat should be a 4, while his melee is only a 2.  This means, functionally, Merlin is the second best damage dealer, just keep him away from the action because he won’t last very long in a fight.  With a name like Merlin, it goes without saying that he’s the best with magic.  In fact, his magic affects everything on the screen once you increase his stat to 6!  He’s also surprisingly nimble for 102 year old looking man.  He’s able to keep up with Thyra in a footrace!  While Merlin can be rather difficult to use, he’s my second favorite to play as.  His drawbacks really take some getting used to, but his benefits far outweigh them in the long run.

​“Then Moses stretched out his hand over the sea, and the LORD swept the sea with a strong east wind throughout the night and so it turned into dry land.  The water was thus divided” Exodus 14:21 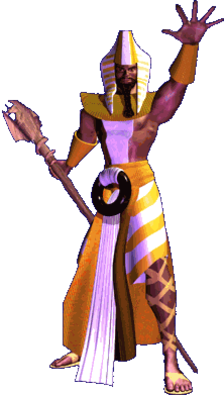 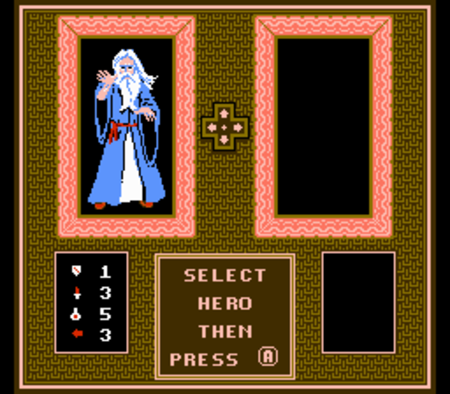 Xena wishes she could be Thyra!  Thyra is named after the wife of King Gorm, Denmark’s first king.  She’s another beginner friendly character, boasting the highest armor, which resists 40% of damage.  Frankly, I’m not sure how.  It doesn’t look like she’s wearing all that much armor to me…  I guess it works kinda like Wonder Woman’s bracers of defense.  She also has the second highest health throughout the game.  She is tied for the lowest attack power, so combat can take some time.  Her magic isn’t very good, only barely edging out Meathead up there.  She’s decently nimble though (see?  I told you it was the bracers!), making her a reasonably fast character. 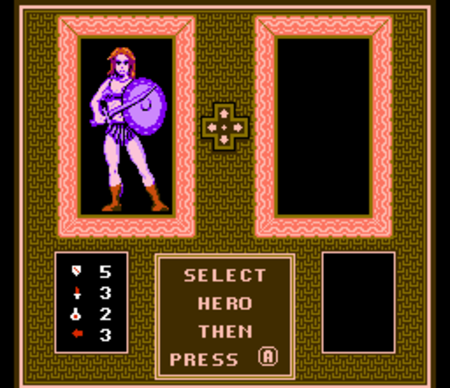 You can’t have a fantasy oriented piece of pop culture without having one of these Governator types in it.  I think that’s a law somewhere.  Thor certainly fits the bill!  Interestingly, during development, this character was called Hulk, not Thor.  Somebody must really have loved The Avengers decades before it was cool.  If those funny symbols on the screen cap don't help, I will!  They all go from 1 to 5, but can each be increased by 1 during gameplay.  The top is his Armor.  Thor is the 2nd toughest, shrugging off 30% of damage.  Next is his damage.  You probably don’t need me to tell you that Thor does the most damage.  Below that is magic…  Not Thor’s strong suit.  He’s the worst in this area and in the final one as well, speed.  Thor is easy to pick up and play, but he’s probably the hardest to actually beat the game with.  Fatigue means you want to finish each level as quickly as possible, but that’s literally never going to happen with Beefcake, here.  Also, his axe is too wide to shoot through diagonals.  Finally, he starts with the most health, but he gains the least per level, so he ends up with less health than everyone except Merlin.  Sadly, his cons significantly outweigh his pros.

This is Thor, the Warrior 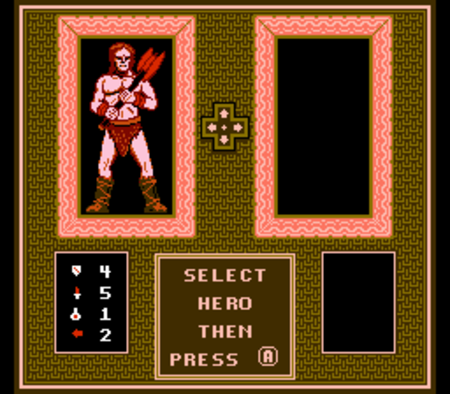 When Gauntlet arrived on the NES a few years later, they made a few changes.  Unlike the original arcade Gauntlet, the NES version actually has an ending, but good luck ever seeing it because this game is hard!  Perhaps I should have said this game is NES hard.  That doesn’t make it any less fun, though!  This version also adds a password save system and clue rooms that 99% of players can ignore because it only actually matters if you make it to the final level.  That would be level 100 by the way, truly making the game live up to its name.  Let’s meet the cast!

There are some elements which are quintessentially “Gauntlet.”  The fantasy setting is important, with well established characters, each boasting unique pros and cons.  Each credit buys you a certain amount of health (500 by default), which can be increased by eating food.  Of course, getting mauled by enemies or mangled by traps will decrease your health, but another Gauntlet trait is fatigue.  In this series, your health always slowly drains (although this is actually an operator setting, but most fans have come to expect it as a part of the series.  Still, it CAN be turned off), forcing you to keep trekking through the dungeon for more food, lest you die.  When you do encounter monsters, and you will encounter hundreds upon hundreds of them, you have a few different ways to deal with them.  You can “shoot” them by pressing the attack button. In this game, shooting simply refers to your ranged attack, whether that’s an actual shot, such as a bow and arrow, or whether it’s a thrown axe.  Some characters excel at ranged attacks, others, not so much.  You could, instead, opt for melee combat.  To fight up close and personal, just run into the enemy and melee ensues automatically.  You also have the option to use magic, but this is limited, so use it sparingly.  Finally, fight isn’t always the best option.  Sometimes, flight rules the day and it’s more in your best interest to simply outrun your enemies!  Remember, your health is always slowly ticking away.  Even if you flawlessly kill off 652 monsters, if you ate up a few hundred health in fatigue to do it, are you really better off?  Finally, your choice of character often dictates which of these options works best for you, helping complete the package of what this game really is.

Years later, when I was in college, I found myself spending a lot of time on one of the sequels, Gauntlet:  Dark Legacy.  In fact, I spent way too much time, and way, waaaaay too much money on this machine.  When you beat it, the game, perhaps as a final insult to the player for having bested it, shows you how many credits you fed into it…

Gauntlet began its life in the arcades, where it made waves with its (incredibly basic by today’s standards) RPG elements, digitized speech, and drop-in/drop-out gameplay, which boasted 4 simultaneous players.  The game is still fun to this day and if you ever see a copy in the wild, drop a quarter or two into it, if only for the trip down memory lane.  “Remember, don’t shoot food!”

What is a dungeon crawler, anyway?  It’s a game where you explore a giant dungeon (or, perhaps, many smaller ones)!  The story takes a back seat, if it’s present at all.  In Gauntlet, the four heroes are tasked with retrieving an orb that was stolen by the evil bad guy of evilness (C).  The focus of the game is on killing monsters and looting treasure, often while empowering your character along the way.  The farther you get, the more powerful and more numerous the monsters get, but the rewards keep pace as well.  Additionally, the dungeon often becomes increasingly labyrinthine in order to confound witless would-be heroes. 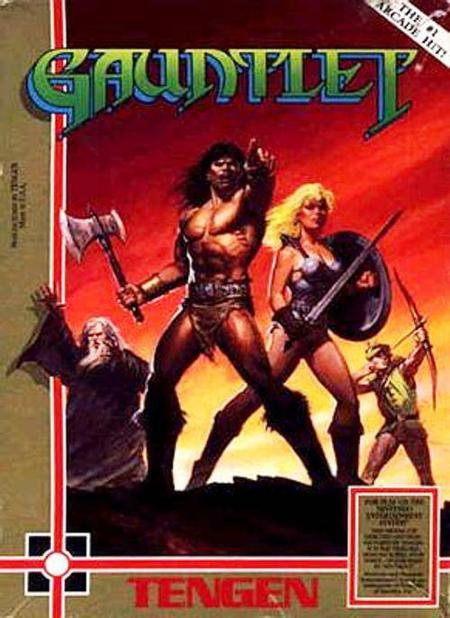 When you hear the phrase “dungeon crawler,” what phrases come to mind?  Diablo?  Might and Magic?  Wizardry?  Or maybe you take a different direction and go really old school – Dungeons and Dragons.  You may even opt for the hilarious parody game, Munchkin, for even though it is for comedy, it certainly still is, itself, a dungeon crawler.  Zero Sum Gaming at The Culture Cache received a donation from Joe from Nashville, Tennessee, and it’s one of the founding fathers of the subgenre -- Gauntlet!