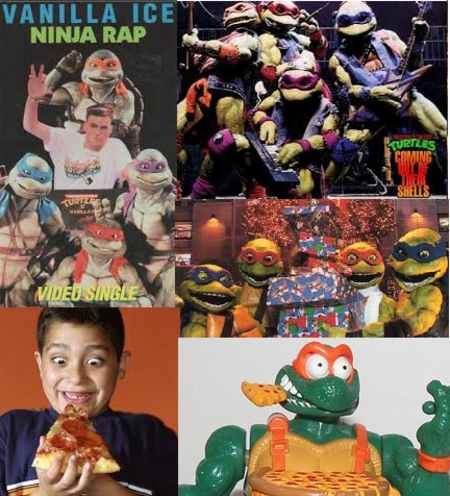 Today's Two Cent Cinema topic comes your way thanks to one of our Patreon donors, Xakor. He has requested coverage of the 2012 iteration of Teenage Mutant Ninja Turtles. As a dyed-in-the-wool stonewash-denim child of the 80's, I am more than happy to oblige.

In terms of appearance, April is perhaps the most affected. She is still a redhead, but the similarities basically end there. Because she is only sixteen, animators wisely chose to eschew the fanboy-fap-fodder, cleavage-baring jumpsuit in favor of a more appropriate outfit consisting of a layered t-shirt (still yellow, with a number "5,"in direct reference to the original), denim shorts, leggings, boots, and a headband. Her tomboyish nature and willingness to learn ninjutsu reflect fresh views on gender, as showrunners and manufacturers finally realized that girls were also participating in this franchise (and...ahem...have been since 1987).

The character design really is an updated-yet-faithful homage to the original cartoon series. The turtles retain their signature mask colors and weapons, and their face and body shapes carry just enough distinction to allow audiences to tell them apart. Splinter is decidedly more rat-like than his predecessor, yet the human elements of his look display much more of the Japanese influence. In fact, the entire show, despite being computer-animated, is clearly influenced by the renewed interest in anime that captured Western animation in the years between the original and current iterations of Turtles.

As for the turtles themselves, their personalities hearken back to their 1980's counterparts in a variety of ways, which is a pleasant surprise for fans of the earlier show. Leonardo is the most skilled fighter and generally more serious, and as a result, he is the natural leader. Raphael still succombs to a nasty temper that leads him (and his loved ones) into frequent trouble. Michaelangelo, or "Mikey," is still the "fun" one, indulging in stereotypical "teenage" fare such as video games and skateboarding, as well as constant pranks and jokes. Donatello, whose 18980's counterpart was a master of machines, retains his technical prowess in this series, only his focus has shifted to hacking and inventive weapon design (in light of 21st-century technology). 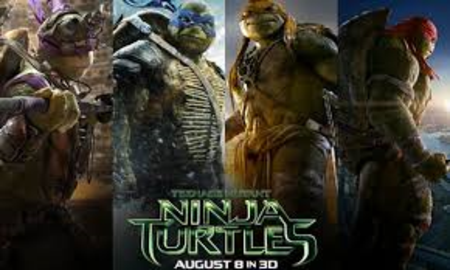 So, in conclusion, I have to set my cynicism and knee-jerk nostalgic loyalties aside for this one. While I am clearly not the target audience, I can safely say there are much worse updates out there, and that alone makes this one a worthy successor. 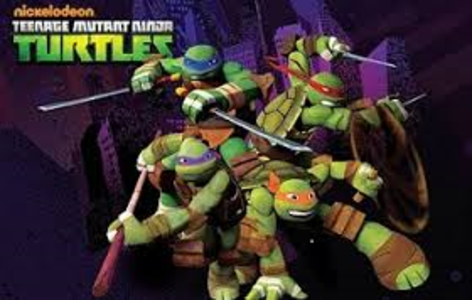 Sometimes, change is a good thing.

As I mentioned, I was born halfway through the 80's, and thus, I was the target for the original animated version of the Teenage Mutant Ninja Turtles (aside from being female). I ate it all up, spending my parents' hard-earned money on the films, the pizza cravings, the merchandise, and all the misguided tie-ins.

Anyway, as nostalgia would dictate, I approach any new "version" of my childhood staples (regardless of the overall quality, as detailed in my Jem article), with a healthy dose of skepticism. I am all for creative reimaginings of art, but I am also an adherent to not fixing things that ain't broke (or at least ain't hurting anybody). So, not surprisingly, it took some convincing (and, while we're being honest, a Patreon donation) to make me watch the newer cartoon. My general view? Not bad, but no substitute for the original.

I wonder if we'll see this guy show up... 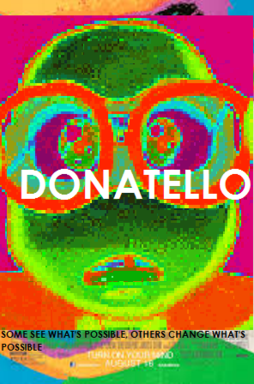 The beginning of the 2012 series retains some of these story elements, but there are fairly major changes. Yoshi is a Ninjutsu master, but he is also the original owner of the pet turtles. As he carries them home, he encounters members of an alien race known as the Kraang. Yoshi fights the aliens, and in the process he and his turtles are mutated not by an ooze of mysterious origin, but by a chemical mutagen manufactured by the Kraang. They retreat to the sewers, where (as in the 1987 version), Yoshi, now known as Splinter, raises the turtles as his sons and trains them in ninjutsu.

Thank you, Xakor, for donating...

The origin of the mutagen and the presence of the aliens are just the initial changes to the story. April O'Neil, the television reporter who befriends the Turtles in the original series, is now the teenage daughter of a psychologist. Like her 80's counterpart, she begins as a damsel in distress when she and her father have to be rescued from the Kraang by the Turtles. However, this April gets to fight rather than chase villains armed with only a microphone or camera, as Splinter chooses to train her in ninjutsu as well.

Those were different times. 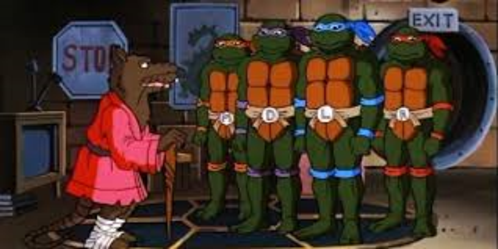 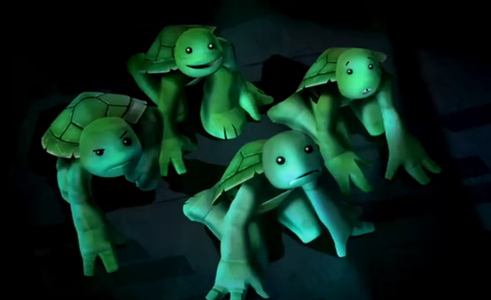 First, some history: This is the third animated version of the franchise, which began as single-issue parody comic book (with a dark tone) by Mirage Studios. Unlike previous versions, it is a 3D computer-rendered series, although the general looks of the characters remain similar to those of the 1980's cartoon. It began its run in 2012, and as of July 2015, is in its fifth season on Nickelodeon. In the 1987 version of Turtles, wrongfully-disgraced ninja master Hamato Yoshi is penniless, and forced to live in the sewers. He encounters four turtles, who were accidentally dropped into the sewer by a young boy who had purchased them in a pet store. Yoshi and all four turtles are exposed to a mysterious ooze and mutated into anthropomorphic creatures--Yoshi becoming the giant rat, Splinter, and the turtles becoming the title characters. Yoshi names them after famous artists and treats them as sons, training them as ninjas and crime-fighters.

The tone of the show is fascinating, because while it often seems as though the stakes are higher in many ways, the banter and overall story arcs unfold in a more silly, juvenile manner. This is not to say that the show cannot be enjoyed by adults, but it is a sign of the cultural shift in the target demographic. While the 1980's version was certainly aimed at children who wanted desperately to be "rad" teenagers, it bore more resemblance to other "superhero" fare of its time. The later TMNT seems to be working harder to earn its audience with more characters that resemble its members, such as teenage April and Casey Jones. The rapid-fire, lowbrow, and sometimes bizarre jokes also appeal to the decreased attention span of the modern demographic.