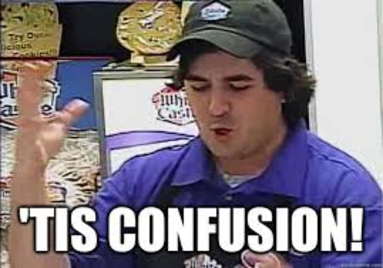 There are plenty of other improv conventions that are put to great use on Impractical Jokers, but the key really is the versatility of the jokers. They have managed to refresh an increasingly stale genre by simply having a good time and putting it all on camera.

3) Don't block: This means to avoid denial. The show is designed as a competition, meaning if the joker is uncomfortable with a task and chooses not to accept those circumstances, he takes a loss. On one episode, Joe was posing as a personal trainer and encountered a large, intimidating guy with rippling muscles. Even though his task was to ask the man "What do you do to work out your ponytail, cupcake?" Joe refused, likely for his own safety. Sometimes a block--or, in this case, a loss--is worth it to the joker.

And now...  some of your favorite (or at least some of ours) movie scenes that were improvised!

There was a time I would have vehemently denied ever watching something that appeared on TruTV. It's primarily a trash channel--one of the many reasons I ditched traditional cable. However, a couple of years ago, my husband introduced me to a show he had recently gotten addicted to, Impractical Jokers. The premise of the show is expressed fairly succinctly in the tagline, which describes the comedians in the show as "four lifelong  friends who  compete to embarrass each other. The men are Sal, Q, Joe, and Murray, who are also members of the improv group, The Tenderloins. They have taken the hidden camera prank formula and added a competitive edge. The segments are presented as challenges in which one (or more) "joker" instructs another to engage in behaviors ranging from the socially deviant to the borderline tasteless. The bystanders become unwitting participants--sometimes victims. The likeability and genuine friendship of the "jokers" (which I was privileged enough to witness in person when I caught a leg of their onstage tour), along with the creativity and absurdity of the pranks, makes for the kind of laughter that can leave you sore, in a good way.

5) Play in the present and use the moment:  Again, this IS the setup of the show. In the previous example, Q's cash register started making noises, to which he responded, "'Tis confusion!" There is a great episode in which the Jokers have to present themselves as the worst roommates of all time, yet still convince someone to share their apartment. Unbeknownst to the player, the rooms contain things such as a live baby, a camera in the bathroom, a room full of stuffed animals, and other embarrassing things. Obviously, the guys find many ways to freak out the interviewees, but in one episode, it all backfired in a delightful way. A man walked in to meet Murr, and his enthusiasm was so infectious that the game transformed into one of Murr trying to match his excitement. Rather than being frightened off, the man joined Murray in jumping on the furniture, leading to one of the most memorable moments in the show's run.

I've been reflecting a lot on how these very average-looking, approachable guys managed to transform an improvisational background into a formula that clicked within a successful television show. The word "prank" is commonly misused these days, especially on the internet. The same could be argued for the word "improvisation," which carries with it an unspoken understanding that rehearsed elements can still be present. As an actor myself with a fascination with improv (even if I'm not the greatest at it on a traditional level), I started looking at how Impractical Jokers enhanced the "prank" market by incorporating their experience with improv.

6) Establish the location: This is adapted somewhat because we're not dealing with straight-up improv scenarios. However, the jokers have been known to create environments that blend into the crowded locations they choose, such as kiosks for fake fortune-telling, bad drawings of volunteers, fake hot dog stands with terrible service, and more. The location becomes pivotal to the joke.

4) Avoid asking questions: When the circumstances are given, most of the time, jokers are not allowed to ask for clarification or direction. When posing as a White Castle employee, Q was asked to speak and behave in a manner described as "Olde English." He immediately took on the persona of a gallant knight, referring to "burgers of ham" and the "legendary wit" of the "sir" making the purchase. It was one of the funniest segments on the episode as a result. 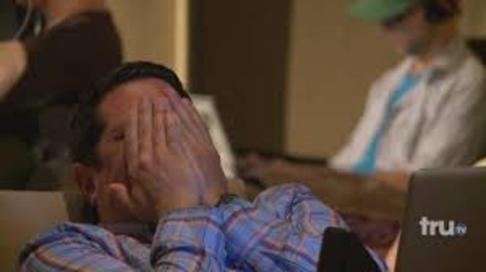 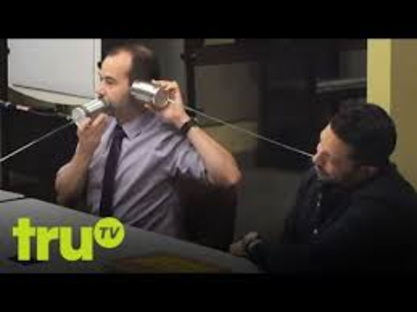 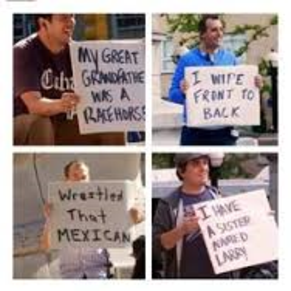 10) For humorous scenes, take choices to the nth degree or focus on actions/objects: The show has this DOWN. The best episodes tend to be the ones during which you look at the jokers and think, "Wow. That just happened." It's easy to fall back on Joe for this one, in particular, because he is easily the most fearless and shameless. He also seems to be the most likely to coin catchphrases, such as "Larry!" (a running gag, sometimes literally, in which Joe shouts for and chases after a fictional man named Larry. "Where's Larry?!" was even the name of their tour) and "Scoopski potatoes!" (a prank in which Joe was instructed to over-serve mashed potatoes to restaurant patrons and ended up making a whole song about it). These catchphrases and gags are actually perfect examples of the "nth degree"--taking a very simple premise to such absurd lengths that it becomes a recurring joke.

7) Be specific and provide colorful details: The key to making the jokes work on the show is fully engaging the "victims." When the jokers tell their outlandish stories, they do so in a detailed manner so that the absurd becomes real. When they have to sell fake products, such as a giant energy bar or a tin can phone, they have to explain the many uses--whether there is one or not--for the product to make the sale. Again, this is a rule that shows up in all the challenges. 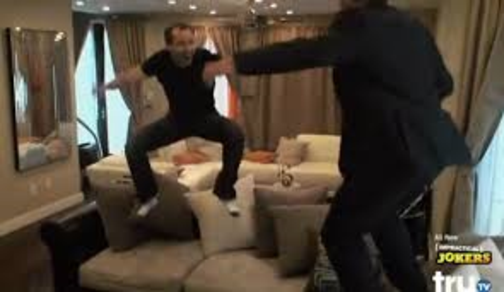 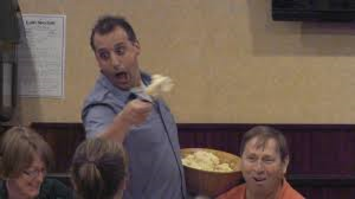 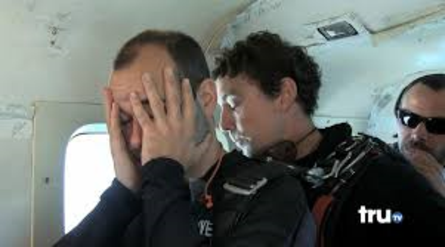 8) Change, change, change: The change described in Alger's improv rules pertains to character more than action. On Impractical Jokers, the jokers have to find a way for folks to engage them before pulling many of their stunts. Because of this, they may have to select tactics very carefully and possibly start subtle before making the change. There's a particularly hilarious example of this when Murr is on the beach attempting to sell men's bikini bottoms called "Flatties." He models them, of course, as he rather meekly approaches a group of sunbathing women. What starts as a serious sales pitch quickly dissolves into a series of penis jokes, and Murray's laughter throughout seems to make him slightly less creepy and more endearing to the ladies. 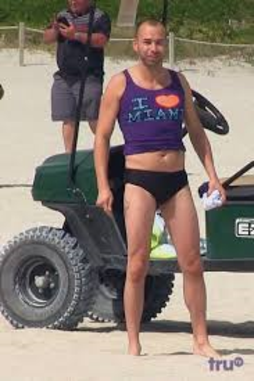 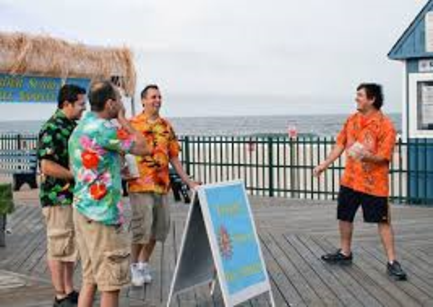 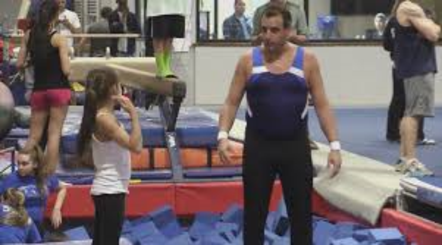 1) Say “yes and!”
2) Add new information.
3) Don’t block.
4) Avoid asking questions- unless you’re also adding information.
5) Play in the present and use the moment.
6) Establish the location.
7) Be specific and provide colorful details.
8) Change, Change, Change!
9) For serious and emotional scenes, focus on characters and relationships.
10) For humorous scenes, take choices to the nth degree or focus on actions/objects. 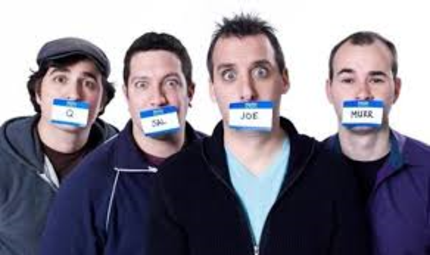 1) "Yes and!": Basically, this is a fancy way of saying "deny nothing, accept everything as truth."Players, or actors, agree to a basic situation and setup, which can be planned beforehand.  This is the most basic convention of both improv itself and Impractical Jokers. For example, in one game, a joker's task is to get a person on the street to agree that they have met the joker before. Off to the side, the other jokers hold up cue cards with absurd, embarrassing details on them, such as "I farted at the dinner party in Copenhagen," or "I ate a live squid at Al Roker's Christmas party." (Yes, those are actually from the show). Another game has a joker holding a bullhorn that is controlled by the other jokers, thus having no control over what words come out. In both cases (and many others on the show), the players must accept and build upon the reality given to them, no matter how embarrassing, outlandish, or potentially risky.

2) Add new information: This goes hand-in-hand with the first rule because it enables the scenario to move forward. In one episode of Impractical Jokers, Joe (the member of the group most likely to take risks and push boundaries) starts a bad gymnastics routine in a public gym as part of a "punishment" (the embarrassing task you receive if you suffer the most losses during an episode). When he starts competing with a skilled little girl, he adds to the humor of the situation. The improv background of the jokers is what keeps the game going every time, because the guys know how to expand upon what they have been given.

So, how well do the Impractical Jokers incorporate these rules into their show, if at all? Let's look at them one-by-one.

9) For serious and emotional scenes, focus on characters and relationships: Hmm. Well, this show is pure comedy. That said, there are times that the jokers must illicit sympathy before things get too out of control.  Starting with stories about exes or relatives seem to work in most cases.