Welcome, one and all, to another week of The Next Issue. As always, I’m your fun and awesome host, the One Man Power Trip, and this week, we continue our tale of John Henry Irons, also known as Steel! Now last week, I touched base on our hero’s origins a little and this week we’re going to dig a little deeper. You see, when John first arrived, he was more of a filler character filling the void that was Superman's spirit in Metropolis. Smithing and donning his own armor as well as using his high tech engineering background to design custom jet boots (I really need to get my engineering degree), Steel stood toe-to-toe with the likes of the Eradicator and Mongul. Once Superman returned, John found himself in the same spot most new characters who arrive due to the death or disappearance of a major character do. He needed to find his own spot in the DC universe. Of course, none of this came hard for him, as his own history with evil corporations and battles over his own inventions with new crime lords quickly helped to establish Mr. Irons as a force to be reckoned with. Over time, the writers would try to add some new gimmicks (teleporting armor anyone?) and supporting characters, but by the end, John Henry Irons did not need any of these things. The strength and intelligence of this man pushed him into Justice League status.

During the “Our Worlds At War” storyline, Steel even got to attempt a rematch with Doomsday, though it did not go well for him. Before that, though, he helped Superman build a brand new Fortress of Solitude! Over time, John became one of Superman’s go-to guys for new tech to be made and after he retired (yes retired from being a superhero), he helped his niece build her own set of armor and carry on the mantle of Steel.  Though as of the new 52 reboot, John is back in the saddle! John has become such a staple in Superman’s  cast that he was one of the first supporting characters to make the transition to the new 52 universe! He has already helped the Justice League time and again both with new versions of Braniac and Doomsday and as I mentioned previously, is currently dating Lana Lang. Steel's new powers allow him to transform his skin to a smooth steel surface and even help him handle harsh otherworldly conditions. Whether you love or hate the stories, there is no denying the ideas, the unbreakable determination, and the amazing intelligence of John Henry Irons. The most human as well as the most in-dominate spirit of the four supermen, Steel has long left the shadow of Kal-El and is poised to become a major player in the new 52. He already proved he could hold his own book once before, and I have no doubt he can again. For some of the best stories I can suggest for this character, please look and find “The Reign of The Supermen,” Action Comics vol. 2 issues 1 through 12, and “Superman Doomed.” Come back next week as we cover another great comic book icon, The Black Panther! I’ll see you then! 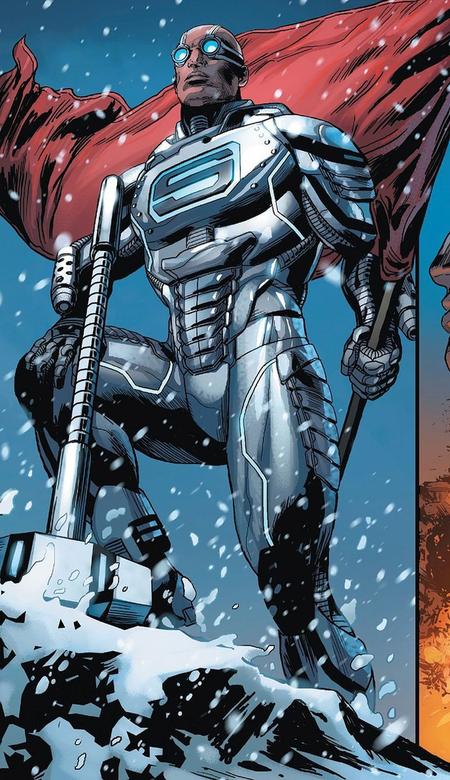