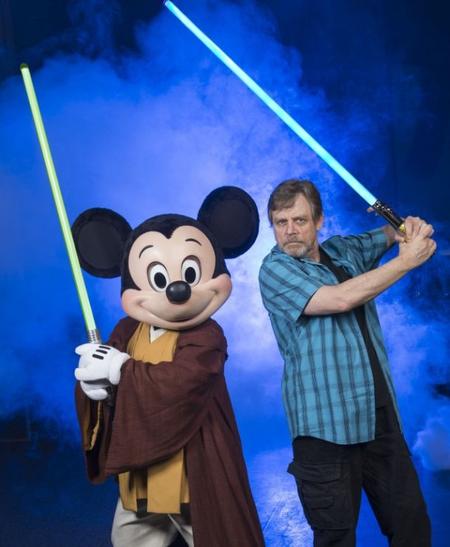 Let's back up. Mark Hamill was born in Oakland, California, but grew up in Virginia. He was an army brat, one of seven children, and participated in Drama Club in high school, later becoming a drama major at Los Angeles City College. His first big role? A soap opera. A recurring role on General Hospital, to be precise. If that is a strange thought for you, consider the fact that his role as Luke Skywalker was a partial result of lobbying by Robert Englund--a.k.a. Freddy Krueger. In other words, Hamilll began cultivating his unique connections to pop culture institutions from the very start if his career. 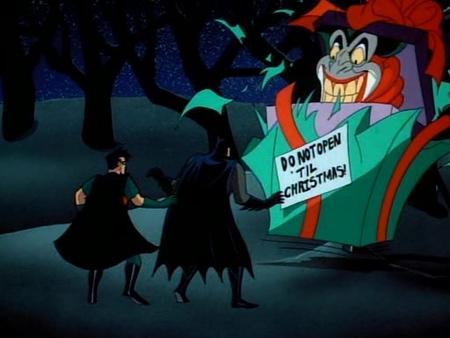 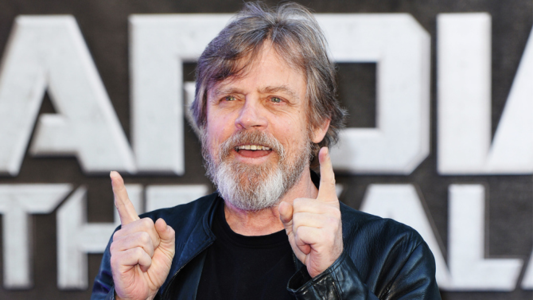 Voice me next, you will.

Star Wars: The Force Awakens has descended upon the world, and I have not yet seen it. I am trying my best to remain cautiously optimistic. The hype has been momentous, and I am just as guilty as anyone about contributing to this. 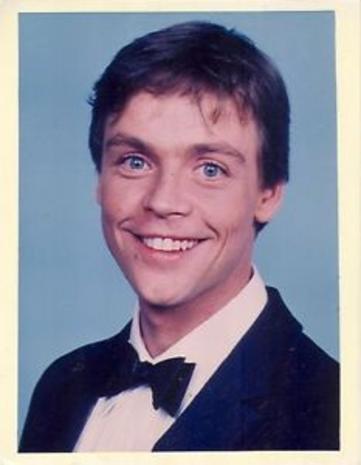 Hamill's ability to shapeshift and engage is what has kept him relevant. Luke Skywalker began as a somewhat whiny, vulnerable farm boy. We watched him grow into a Jedi, absorbing the frustrations and lessons of his journey and appearing in Return of the Jedi with a poise and elegance that contributed to the trilogy's stirring conclusion.  Suddenly, we hear Hamill's voice, but it bears no resemblance to the gentle timbre he reached in the final Star Wars film. He is now a demon of glee, savoring the taste of his own venom and amusing himself with his own darkness. The voice that exploded from The Joker and re-established the character for generations to come demonstrates a range that is sorely underestimated. The A-list does not guarantee a legend, but the versatility and the ownership of not one, but two avatars of pop culture certainly leans in that direction.

I am not comfortable with this, and I am not ready to speculate further. Thus, for my own sanity and consolation, I am shifting my focus to the man who brought Skywalker to life--and managed to surpass this legacy through other avenues. I want to talk about Mark Hamill. 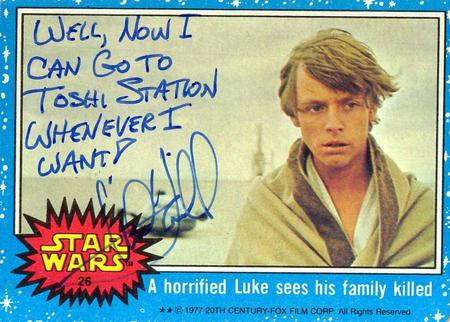 When Englund suggested his friend Hamill for the role of Skywalker, Hamill agreed to audition and, of course, won the part. At the time, nobody had an inkling of just how mammoth this film would be. Hamill became a star as he reprised his role of the space farm boy-turned-galactic hero in a series that would change the cinema forever.  Clearly, Hamill had to distance himself from Star Wars in unique ways to avoid typecasting. He took on films such as 1980's war film The Big Red One and various Broadway productions.  That said, outside of Star Wars, Hamill is best known for his voice work--with very good reason.

Of course, the rumor mill is strong with this one. So many potentially horrific scenarios involving our favorite characters have been bandied about across the internet and nerd water coolers everywhere. Factor in the absence of Luke Skywalker from the trailers and posters, and we have some valid concerns. Could we lose our hero to the Dark Side, after all the events of Episodes IV-VI?

Or something else entirely. 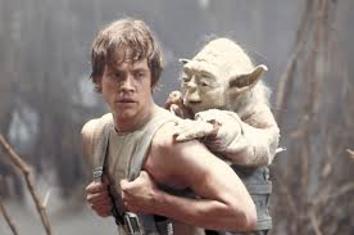 Perhaps this attitude is part of what makes Hamill the ideal celebrity for earnest nerds. The humility, blended with his unique path within the industry, is part of what draws us to him after all these years. Hamill could have easily faded into obscurity after creating one of the most important cinematic icons in history, yet he continued to pursue and fine-tune his craft. He did so by giving new life to another cultural icon, turning the character into one of the most interesting and entertaining villains in the comic book world. Batman: The Animated Series appeared very shortly after the first live-action blockbuster in the franchise, yet Hamill did not simply give us a Jack Nicholson impression. He instead gave us a Joker that was completely dark and unhinged, yet completely charming and hysterical. An online videogame reviewer once aptly described Hamill's Joker as someone whose intentions were so erratic that a wrapped gift from him could be a bomb or a puppy, depending on the day or on his mood.

Mark Hamill never reached the fame level of, say, Harrison "Han Solo" Ford, but he accomplished something just as noteworthy, if not more so. Several years after creating the role of Luke Skywalker, Hamill pursued a career as a voice actor. In 1992, he became the voice of The Joker in Batman: the Animated Series. It was this role that allowed Hamill to carve out a new, cozy niche. To many, Hamill's version of the Batman supervillian has become the most beloved--the ideal.

In a recent reader-generated interview for Empire, Hamill was asked if he ever regretted not becoming a "big star," or if he envied the success of Harrison Ford. He responded, "All I know is that I've consistently worked in the fields I want to work in...I'm torn between wanting to do more and be acknowledged more, and on the other hand, I've been married to the same woman after 23 years; my kids don't hate me." Of his legacy as Skywalker, Hamill stated, "(I)t's hard to be really cynical when a six-year-old is looking at you like you're a cross between Santa Claus and Superman."

Hamill was already doing voice work pre-Star Wars in films such as Bakshi's Wizards and the Hanna-Barbera show Jeannie. After Star Wars, his voice work consisted of a wide range of characters, such as The Hobgoblin in the 1990s animated Spiderman series and a couple of roles in the Justice League series. However, it was his role as The Joker that won him a slew of new, devoted fans.