It all began waaay back in 2005, with a story arc in “Ultimate Fantastic Four.” Ultimate Reed Richards had created a gateway to an alternate reality, and after conversing with his counterpart, decided to travel to that world and meet with some of their greatest minds. What Reed thought to be a grand adventure turned out to be Hell on Earth. Once he arrived, he found nothing but devastation and death, as well as the zombified Fantastic Four. The Zombie Marvel Universe, or ZMU as we’ll call it, was very similar to the existing MU at that time. Fans of the Ultimate Marvel comics had been wanting a crossover with the standard MU for awhile, but Marvel decided to give them a little twist. So how did things go so horribly wrong you may ask? It all started with a single, powerful being from another alternate reality arriving on the scene through “A flash in the sky and a ripple through the clouds.” He was an alternate version of a hero known as The Sentry, and the “hunger”, as it came to be known, had driven him to punch his way into this reality looking for a new food supply. 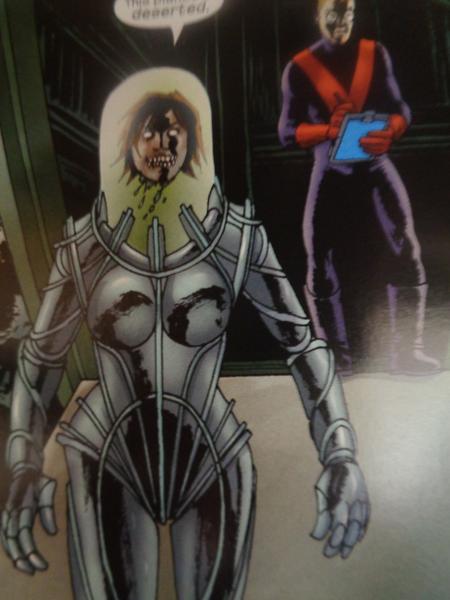 Marvel zombies are also more resilient than standard zombies. Whereas a normal zombie is finished off by one bullet or a sharp blow to the head, a Marvel zombie can actually have large portions of his brain damaged or even cut right out and still be perfectly fine. Magneto slices off half of Colonel America’s head and he acts perfectly normal (for a zombie). But if you manage to destroy the entire brain, then the Marvel zombie is destroyed. This is shown when Red Skull reaches into Cap's head and pulls out the rest of his brain. Throughout the story, we see several zombies with holes blown through them, decapitated, stepped on, burnt, you name it, but the only thing that seems to stick is complete destruction of the entire body or at least the entire brain. Poor Tony Stark spends a large chunk of the story as just a torso. The Wasp is shown as just a head for all of the second half. Though later on, we find out that if a Marvel zombie goes long enough without eating, their personality starts to revert back to normal. This is shown near end of the miniseries, when, after a five year jump, we see the Wasp in a robotic suit with her head floating in fluid and not trying to eat anyone or anything. One taste of flesh, though, and they are back to square one.

As you can imagine, when any powerful being arrives in such a fashion, the Avengers arrive to investigate. The Sentry's power, amplified by his hunger for flesh, tore through the Avengers infecting anyone he did not completely devour. The plague was very quick to affect anyone bitten or scratched. Within 24 hours, the Avengers had devoured almost everyone on the planet. Normal people without powers were the first to go, then anyone with powers that had not been changed. The “hunger” drove a being to want to consume the living and infect people with powers so it could spread further. Ultimate Reed barely managed to escape this initial attack, and after fumbling his way right into the path of the zombie Avengers, he managed to find one of the very few survivors left on this zombie Earth. Magneto, the master of magnetism, had managed to survive and was holding his own against the zombie heroes. After a grand escape and a meet-up with some human refugees, Magneto and Reed devised a plan to return back to the ultimate universe and seal the ZMU for good. Things did not go well at first, but a surprise save by the Ultimate Fantastic Four helped even the odds.

Smart, strong, and powerful, the Marvel zombies are every bit the same people they were before the hunger. With the virus in their systems, they are driven by an insatiable hunger, to the point of not caring what they have to do to eat. With their intellects intact, they are your worst nightmare in a zombie apocalypse. They even managed to devise a plan to kill and devour Galactus himself. This, in turn, granted the few zombies left after the battle the power cosmic. Granted, they had some of it when they ate the Silver Surfer, and then used that with a device they came together to build to kill Galactus. The cosmic zombies include: Iron Man, Ant Man, Spiderman, Luke Cage, Hulk, and Wolverine. At their full power combined, they are able to devour worlds much like Galactus, though quicker. If you want a great example of what the hunger is capable of, there is no better one than Hank Pym. Throughout the story, you are shown that he keeps his head cool the most, but its due to the fact that he keeps his friend Black Panther tied up in his lab and cuts off pieces of him to eat over time, sewing up his wounds to keep him alive and sedating him to both keep him from breaking free and give Hank a small, small sense of moral uplifting. He mentions he has to do this to keep himself calm enough to keep trying to find a cure, but he has no cares of what he is doing in the first place, and when given cosmic power from Galactus, his search for a cure is pretty much abandoned.

One of the most dangerous aspects of a Marvel zombie, though, is that the virus tends to desensitize its host very quickly. Only people who are normally very sensitive seem to show any morals or regret for the things they have done. Spiderman ends up being the fall guy on this one, as each time the zombies consume, they regain their sanity for a short time, which leads to Peter Parker freaking out again and again over his eating Mary Jane and Aunt May. Everyone else picks on him or tells him to shut up and stop whining. At one point Colonel America tries to lie to Tony Stark about what happend to Magneto when they caught him. The Colonel tells Tony that Magneto was incinerated in an explosion and no one got to eat him at all. Tony, disbelieving this story, asks Peter how his Aunt May and Mary Jane are doing to which he falls down crying proving he had eaten recently. 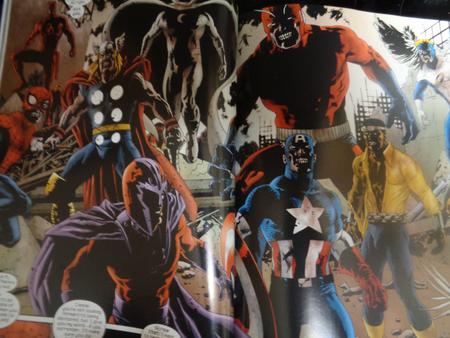 Through this initial story line and the follow up mini series (by Robert Kirkman of The Walking Dead), many precedents are set for the zombie heroes in their new undead forms. For the most part, every hero and villain retains his powers and personality with only a few exceptions. The virus negates any and all healing factor powers (i.e. Wolverine and Hulk) as well as suppressing their personalities until after feeding. While it is mentioned that the power to heal did slow the plague down, it did not keep it at bay completely. Any damage these particular characters sustain once infected stays with them. Wolverine has to cut off one of his arms at one point and it never grows back. When Hulk becomes Banner, he shrinks down but the food Hulk ate is still the size it was when he ate it, and in one instance, rips through Banner's stomach and falls to the ground. Magic itself seems to grow weaker as well over time. Thor slams his hammer into the Silver Surfer and it explodes. This shows that either the enchantment on Mjölnir remained while the hammer itself grew weaker, OR the hammer itself lost all of its power (possibly due to any incidents the hunger has had in Thor's home realm) and was just a normal hammer at that point. Likewise, the Juggernaut is shown to still be a mammoth of a man and in full armor, but Wolverine stabs right though his mouth opening in his helmet, piercing his skull. When the Cytterak Gem is fully active, Juggernaut cannot be cut even by adamantium claws, but the magic had faded and left him vulnerable due to the virus.

Hello readers, and welcome to a very spooktacular, all month long Halloween Celebration of two of the most horrorific comic book stories of all time. This is The Culture Cache’s first Halloween, and being that it is my favorite of all holidays, I figured we’d do this with a comic book brawl to the undeath! For the first few weeks, we are going to be covering the Marvel Zombieverse: their powers, origins, victories and defeats. We’ll be covering their greatest strengths and weaknesses and on the final week of the month we will open a poll for all of YOU, the awesome viewers of The Culture Cache. You will get to vote and choose who you think would defeat whom in this zombie eat all brawl! I will note to our younger viewers that the articles and videos on The Next Issue over the course of this month will hold images of zombie violence and gore so please be advised. So lets get ready to EEEEAAAAAAAAAAAAAAAAATTTTTTTTTTT!!!! 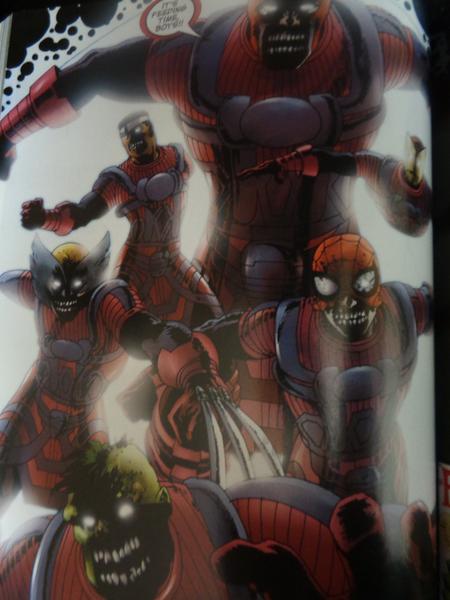 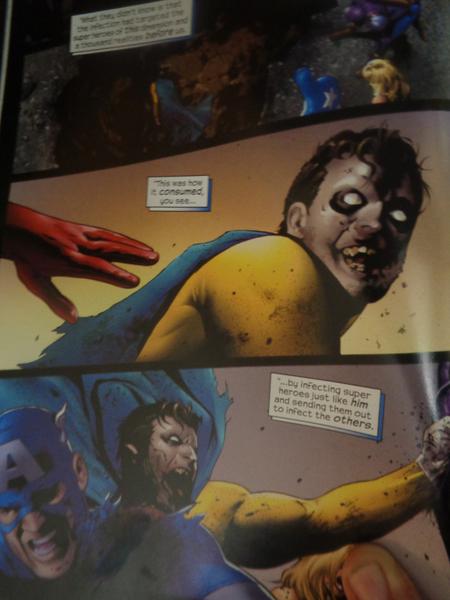 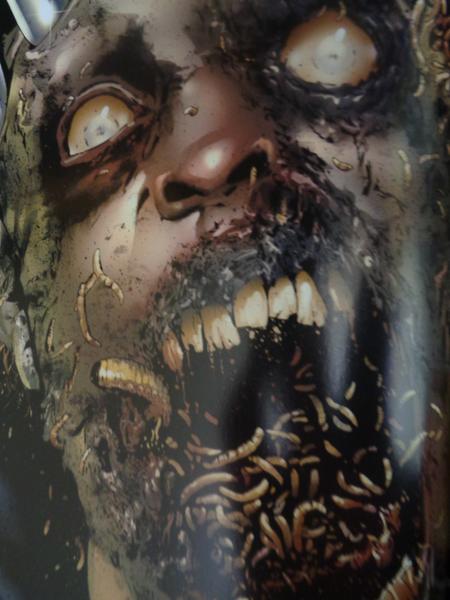 That's all for this week's episode of The Next Issue. Stay tuned for next week when I will discuss the capabilities, strengths, and weaknesses of the Marvel zombies further, as well as touch upon a little of the Black Lantern Corp to start drawing a few comparisons from the DC side of things. Sweet dreams, and I’ll see you next week for The Next Issue. 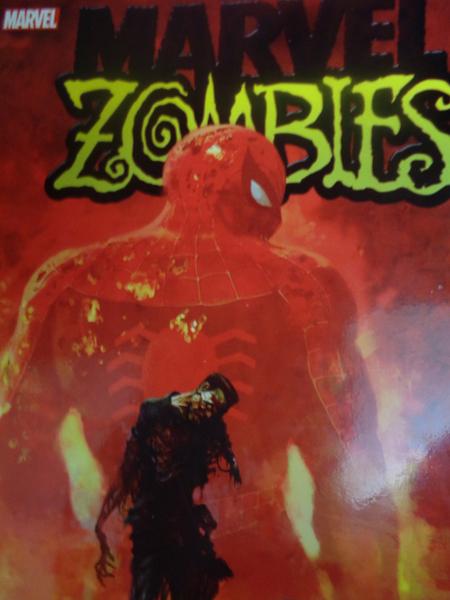 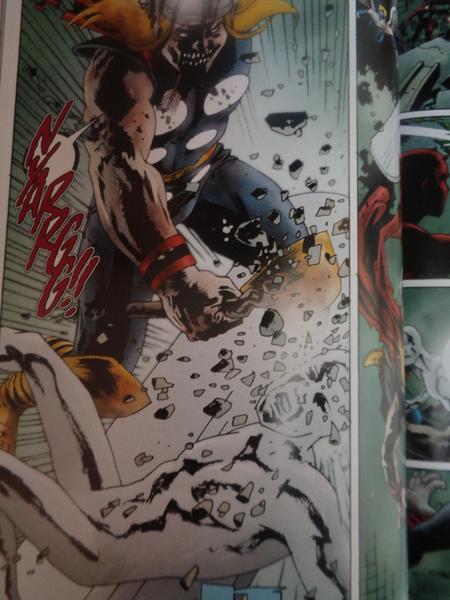