So, bottom line, is the game worth the asking price?  ABSOLUTELY!  Full disclosure, I imported this game when I was in high school.  I paid $70 for it then and it was worth every penny!  Frankly, I’m grateful that Xakor’s request let me play through such a fun game again to bring this to you!  I just checked eBay and you can get a copy of this game for as low as TEN BUCKS!  That’s an absolute steal for a game this good!  Also, don’t let the language barrier keep you from enjoying this gem.  While you may not be able to get every detail of what’s going on (and neither can I), most of the game is displayed with pictures of spells, items, etc and Arabic numerals, so you can enjoy the game without understanding the first thing about Japanese.  If you are a fan of SNES games or RPGs, you owe it to yourself to pick this game up, especially when the price is as low as it is.

Let’s use Hawkeye’s chart from the instruction manual.  The green block on the left is his base class:  Thief.  At Class Change, if he chooses Light, he becomes a Ranger, while the Dark path leads him to become a Ninja.  For his second Class Change, if he was already a Ranger, Light sees him through to become a Wanderer, Dark a Rogue.  Had he instead chosen to be a Ninja, his second Class Change options are Ninja Master for Light and (my favorite) Night Blade for Dark. 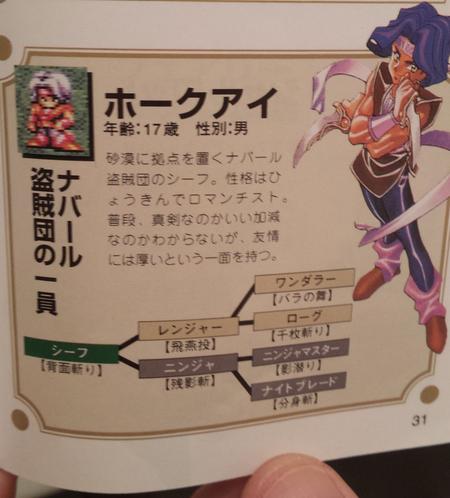 All characters start as a base class.  This will get you by until you reach Level 18.  By this point, enemies are getting pretty strong and you are likely having trouble contending.  The solution is simple.  Just visit a Mana Stone and Class Change!  You may choose the Light or Dark path.  Generally speaking, the Light paths have more spells and abilities, while the Dark classes tend to have better, relevant stats.  Near the end of the game, enemies become extremely difficult and keeping up becomes and exercise in futility.  It’s time for another Class Change!  This one is a bit trickier to pull off.  You must be Level 38, visit the Goddess Statue in the Mana Sanctuary, and have one of two specific items.  There are Light and Dark items unique to each class, meaning that you don’t simply get to choose Light or Dark, but you must have the correct item.  The end result is that each character has 4 totally different outcomes by the end of the game:  Light-Light, Light-Dark, Dark-Light, and Dark-Dark.

The game is set 1000 years before Secret of Mana.  Mana is disappearing from the world and your chosen team of three unlikely heroes is tasked with assembling the 8 Mana spirits (just like the Avengers!) and retrieving the Sword of Mana (roll credits!  Oh wait, wrong game).  The Sword of Mana has the power of creation and destruction, so, naturally, you aren’t the only ones after it.  How can you stand up to three vicious warring factions bent on world domination?  Enter the Class Change.

Luna (Moon, that's not a command) 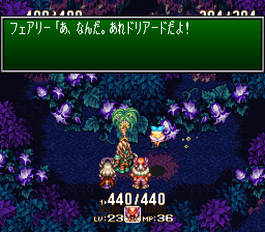 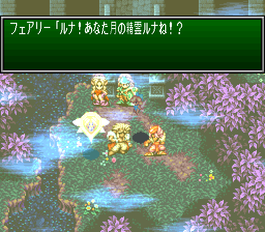 Salamando (Fire, hopefully you figured this out) 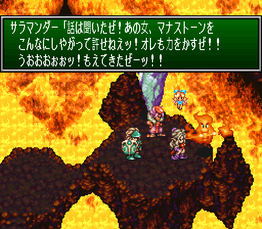 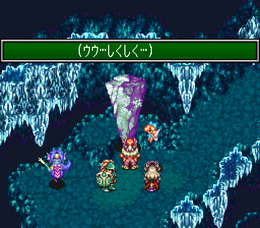 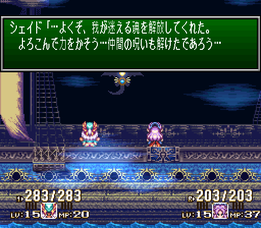 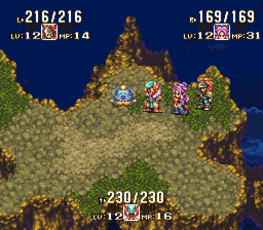 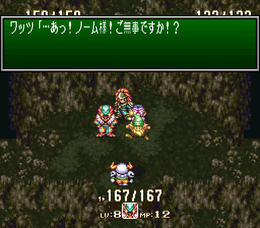 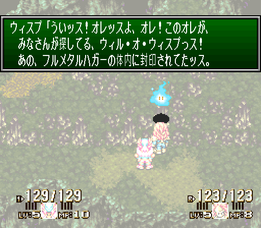 This game is all about player freedom, while still telling an interesting story.  It’s quite amazing how they manage to pull this off!  At level up, you get to choose which of your stats to increase, so you directly influence the growth of your characters throughout the entirety of the game!  Many spells have minimum stat requirements in order for characters to learn them, so this isn’t just an exercise if RPG bean counting.  Unless you set out to make it so, it’s never the same game twice.  The replay value of this game is off the charts and for an RPG, that’s saying something! 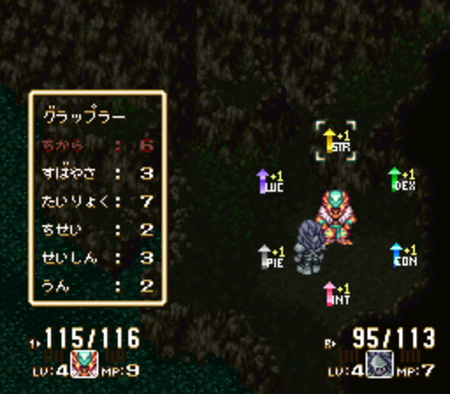 Riesz is an Amazoness (yes, that’s what it says, not Amazon).  Like Hawkeye, she is at least decent at everything.  She has very high Strength and Dexterity, good Constitution, Intelligence, and Piety, and a fair Luck stat.  She really comes into her own after the first Class Change (!), much like Hawkeye.  She can either buff allies or debuff enemies.  Choose Riesz if you like supporting your allies with a little summoning on the side - this is a Squaresoft game, after all. 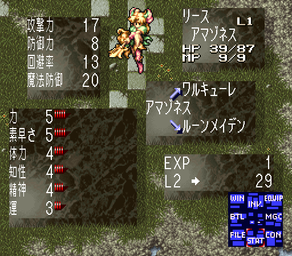 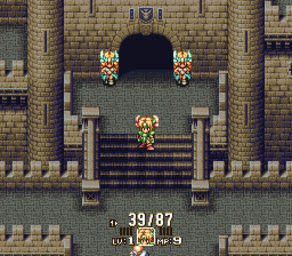 Charlotte is an elf child and a Cleric.  The haunting memory of her parents dying while she was very young led her to live with a priest (insert your favorite joke here).  As the events of the world slowly creep into her life, Charlotte’s adventurous nature places her firmly in the middle of the action.  Charlotte has the best Piety in the game, along with great Intelligence and Luck.  Like Angela, her physical stats are poor.  You can think of Angela as a “black mage” and Charlotte as a “white mage.”  Choose Charlotte if you want to care for others and see them through their struggles. 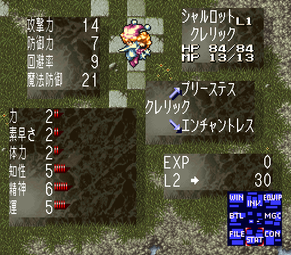 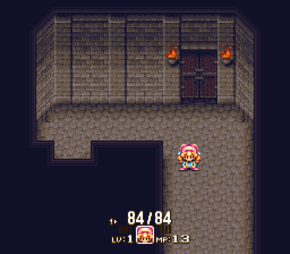 Angela is a Magician, although at the start of the game, I use that term loosely.  While the status screen above clearly lists her as a Magician (if you can’t read the Japanese, you’ll just have to trust me.  It does.  It’s right between those two arrows.  More on those arrows in a bit), she doesn’t actually know any magic.  Angela is the queen’s daughter and, as a result, is incredibly spoiled.  She blows off her magic training classes (quite humorously, actually) and takes her existence for granted…  until she learns that she is to be the sacrifice for an enormously powerful spell.  Angela has the highest Intelligence and is the best mage in the game.  She also has good Piety and Luck.  Her physical stats, Strength, Constitution, and Dexterity, are lacking.  Choose Angela if like playing as a glass cannon and blasting foes from afar. 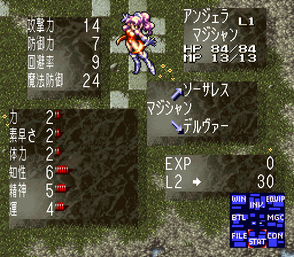 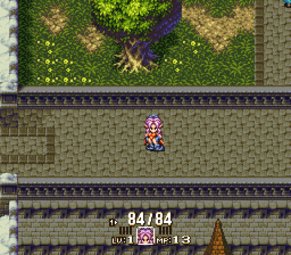 Hawkeye is a Thief and my personal favorite character.  Hawkeye is forced to fight his best friend, Eagle.  After besting Eagle, Hawkeye is framed for murdering him and must flee.  Additionally, Eagle’s sister, Jessica, with whom Hawkeye is romantically involved, is used as the bargaining chip to buy Hawkeye’s silence.  If he ever comes forward with the actual story of Eagle’s death, Jessica will be killed.  Hawkeye has high Dexterity and Luck and he honestly isn’t bad at anything.  He is, by far, the most versatile character in the game.  While he doesn’t hit as hard as Kevin or Duran (or even Riesz), he hits twice per attack, so he can usually hold his own in a fight.  His Constitution is decent, but his high Dex means he has a high Evade, so he’s less likely to take hits.  While it takes a while for him to learn any Magic (minimum of level 19), he learns a surprisingly diverse set of spells!  Choose Hawkeye if you like finesse and a variety of abilities. 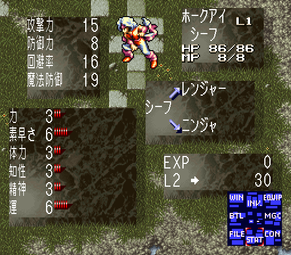 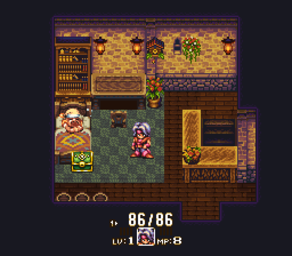 Kevin is an interesting character.  As a member of the Beast Kingdom, his bloodline means that he turns into a werewolf at night.  This is more than a cosmetic change, as it adds 33% to his attack power!  While Kevin’s story is less tragic than Duran’s, a mysterious entity called the Death Eating Man forces Kevin to kill his dog, Karl.  Kevin is the group’s resident meat shield, boasting the highest Constitution.  He also has good strength.  He suffers from the same low Intelligence, Piety, and Luck that Duran does, but because he is a Grappler, his martial arts training allows him to hit twice per actual attack.  While Duran will outpace Kevin’s damage hit-for-hit, Kevin deals more actual damage (especially at night!) by dealing more hits.  Choose Kevin if you like to shrug off damage and stay in the fight. 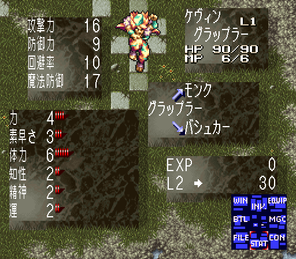 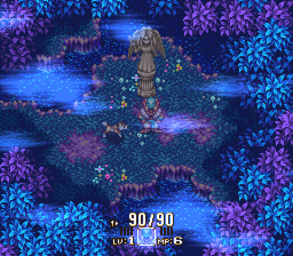 This is Duran (just Duran, only one).  He is a Fighter with a proud streak, but can be compassionate or even vulnerable at times.  He lost his parents at an early age and, in some ways, sees his king, Richard, as a bit of a father figure; however, it seems that Duran’s father, Loki, may not be as dead as he thinks, (*Spoilers for a 20 year old game you likely can’t read*) ala “Duran, I am your father.”  In game, Duran is the character with the highest Strength and he also has good Constitution and Dexterity, while he suffers in terms of Intelligence, Piety, and Luck.  Choose Duran if you like to smash first and ask questions later. 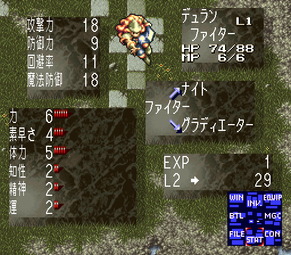 Well, this is certainly different to say the least!  If you couldn’t tell, this game is a Japanese import.  In fact, it’s the first import title I ever purchased, though it’s far from the last.  The title of the game is Seiken Densetsu 3.  Interestingly enough, we got the first 2 games in America.  The first was localized on the Game Boy as Final Fantasy Adventure (and later rereleased for the Game Boy Advance as Sword of Mana), while the second is a popular Super Nintendo title:  Secret of Mana.  For whatever reason, this one never reached across the Pacific, although it would seem that at some point the game was considered for English speaking audiences.  The names of the playable characters are decidedly not Japanese at all.  Let’s take a look at them. 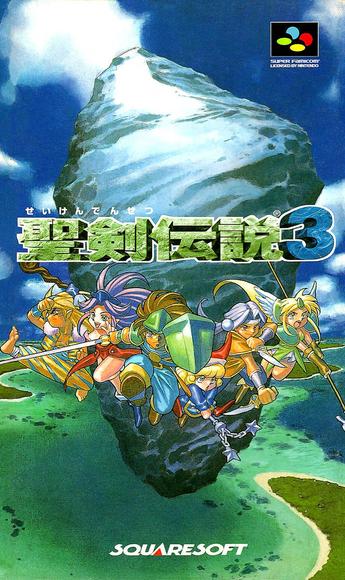 Welcome back to Zero Sum Gaming, here at The Culture Cache!  This time around the topic was chosen by one of our Patreon supporters, Xakor!  He picked a great game that, unfortunately, is criminally obscure in the United States of America, although it has some famous stateside siblings.