This blending continues inside the Skate Shop.  The owner’s look seems directly counter to the words he’s saying.  That “Dear boy” he’s talking about will beat the shit out of you in the Joust.  That’s actually the entire point.  He’ll also do so in the Jam, while inflicting some healthy vandalism in a back alley.  Considering the broken bottles that litter that event (at 200 points a pop!), the Skate Shop itself, as well as the streets surrounding it, is remarkably clean!  For that matter, I’m not sure how many skateboarding marines there are either… 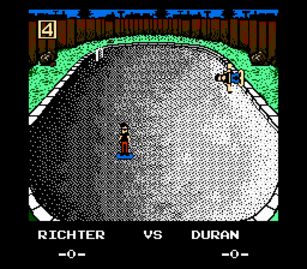 Despite the nearby criminal activity going on, this part of town has the aforementioned sparkling Skate Shop.  It also has a skate park with 2 different events going on.  And it’s not an unimportant part of town.  Look at the grandstands in the background.  They’re full of people!  Clearly, this is a city that appreciates the unorthodox athleticism that is skateboarding!  Perhaps this place even hosted the first X Games. 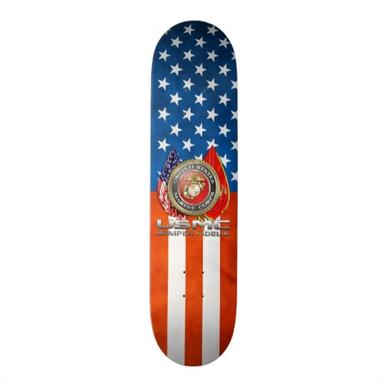 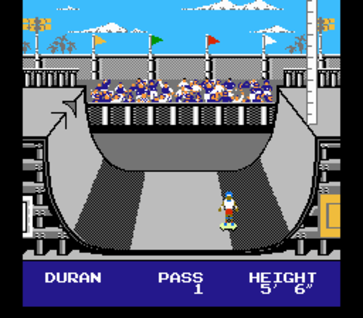 I know it looks like this guy uses regular foot, but the controls here are definitely goofy foot.

See Skate or Die in action! 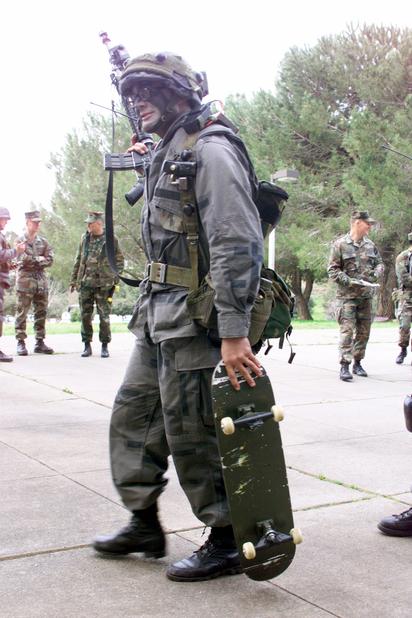 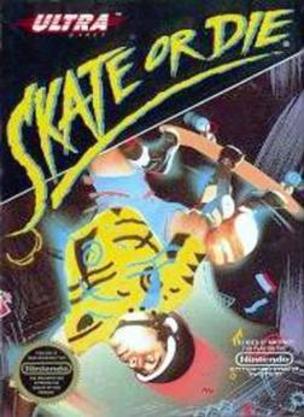 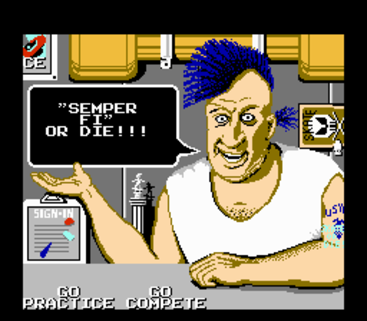 Ok, I’ll do my best to keep my 80s in check for the rest of this article… but I make no promises.  In all seriousness, though, skateboarding was everywhere in the 80s.  Seriously!  Even my fat ass had a skateboard back then!  Knowing the cultural climate of the day, it makes sense that a game like this came out in 1988. 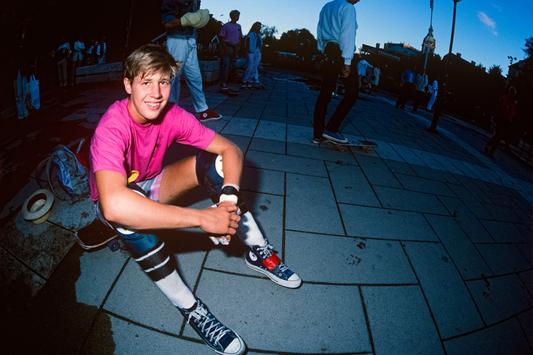 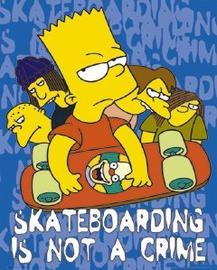 There are 5 different events in which you can participate:  Freestyle, High Jump, Jam, Race, and Joust.  Each of these events is unique and a decent representation of both skate and 80s culture.  On the one hand, there are blatant counterculture elements present in the Jam and Joust events, but at the same time, if the store front didn’t obviously state “Skate Shop,” you’d never be able to tell it apart from any other business.  From the outside, it looks a bit like a combination barber shop and café.  I wonder why there aren’t more of those… 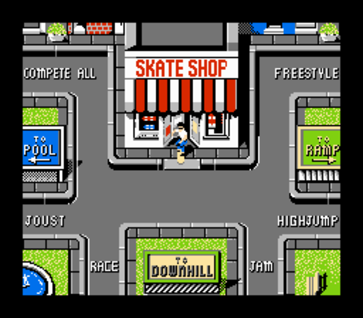 Nevermind!  Consider my words officially eaten!  I wonder if that guy’s going to open up a Skate Shop some day. 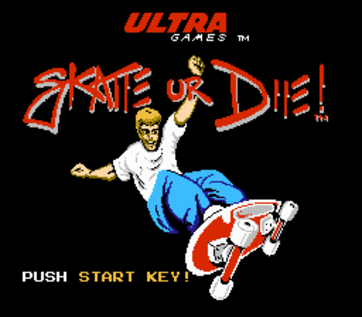 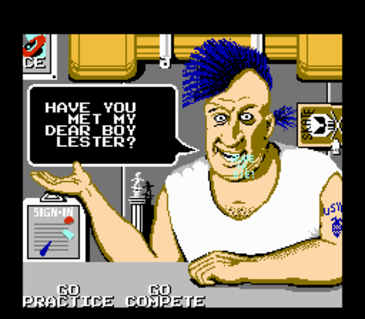 This game perfectly captures the juxtaposition of skate culture during the late 80s.  One the one hand, it was still something to be shunned and avoided, while at the same time, it was cool, edgy, and something to be embraced.  Even the Teenage Mutant Ninja Turtles got in on the act!  For these reasons, it makes sense that the Bones Brigade really came into prominence in this era.  For those too young or too old (I finally get to say that!), this was a skateboarding team that rode for the Powell Peralta company. 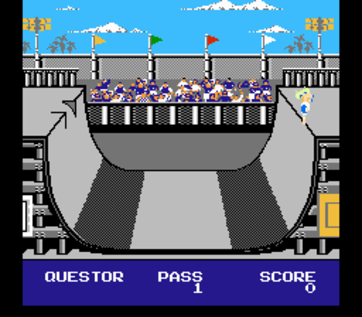 If you’ve read this far into an article about skateboarding and video games, you almost certainly recognize one of those guys pictured above, but I want to talk about the other one for a bit.  His name is Rodney Mullen, and he’s a legend in the skateboarding world.  He invented some of the foundational freestyle tricks, including the flatground ollie and the kickflip.  His life is, perhaps, the perfect allegory for this game.  His authoritarian father didn’t always support him, but he did ultimately come around.  I’ll him tell you in his own words:

True, but vandalizing someone else's property to say so certainly is...

Except maybe this haircut... 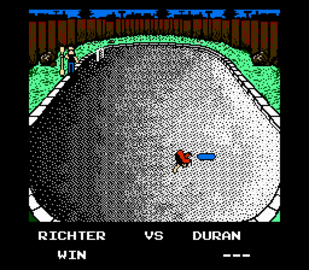 We have a totally tubular installment of Zero Sum Gaming today!  Jenni B, one of our righteous donors through Patreon, wants to see Skate or Die for the radical Nintendo Entertainment System!  You have a better idea?  What’s your damage?  Become one of our gnarly Patreon donors and we’ll create the content you want TO THE MAX!  Now let’s motor and check out this bad game!

To be fair, his father did have some legitimate concerns.  Chief among them was his son’s safety.  And this isn’t an unfounded fear.  Let’s just say that he passionately fought for his hobby tooth and nail… and nail won…  It’s not hard to find images of Rodney Mullen or Tony Hawk with obvious dental damage.  This brings us full circle to the title of the game, Skate or Die!  But having said that, yes, it’s easy to find all kinds of horror stories of people getting injured while skateboarding, but it’s not really any different for any other physical activity.  The media is on a kick to showcase every football injury under the son at the moment.  And soccer is even more likely to injure players!  No risk, no reward.  Be safe, but don’t let the threat of injury (or anything else) stop you from doing whatever it is you want to do.  As for me, I’ll stick to playing way too many video games! 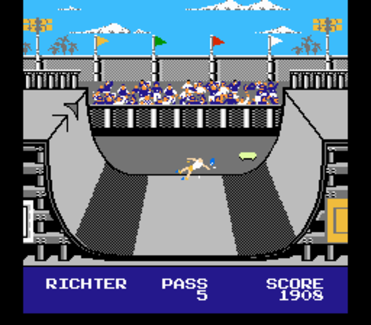 This guy likes goofy foot, not that there's anything wrong with that.

This part of town is quite strange.  There’s a pristine Skate Shop just down the road from a crime-ridden, dirty alley.  There’s also a nearby empty pool in which local toughs duke it out for supremacy.  Many of you younger readers may not quite understand this.  We all know that “Skateboarding is not a crime,” but that mentality wasn’t as common back then.  In the 80s, skate culture simultaneously sought acceptance and differentiation at the same time.  To an extent, it still does.  In that vein, it makes sense that these seedier events are considered absolutely normal and an integral part of the game.

The ubiquity of this game and the culture it represents (and even, to an extent, defines), inspired Teenage Bottlerocket to write this little ditty.  It’s called (imagine that) Skate or Die!

My dad wouldn’t let me have a skateboard. He thought I’d get hurt and never get good, and the culture was bums, and I’d turn into one. He was a dentist, but before that he was military, and there were times you’d call him, ‘Sir.’ New Year’s Day he had a drink and felt better, and the skate shop (!) was open. I learned to skate in our garage. We lived in the country in Florida, it was sort of farmish, and there was no cement anywhere else. Vert skating was the kind of skating that was done in pools, where you could get airborne and be weightless. The other style, which is what I did, was called free style, which was tricks you could do on flat ground. 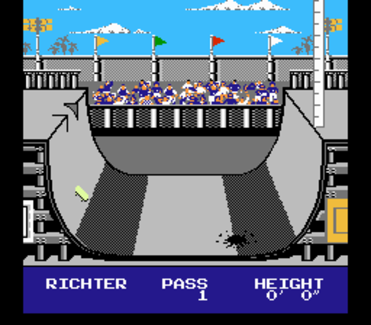 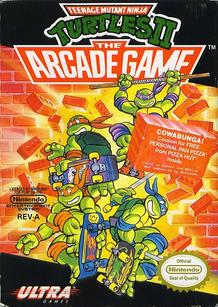 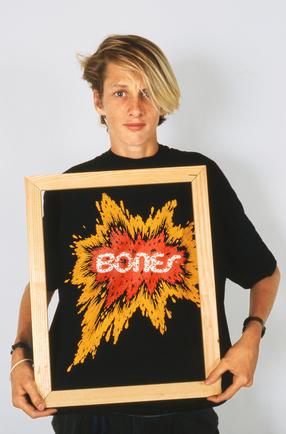 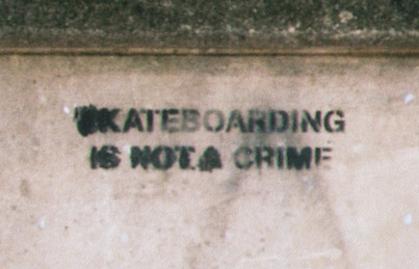 Aside from the fact that you can’t swing a dead cat without hitting half a dozen movies with some variant of this as the plot (October Sky was the first that came to my mind!), this was his real life.  Notice the different settings Mr. Mullen mentioned.  Now take a look back at the settings in the game.  That’s not an accident…