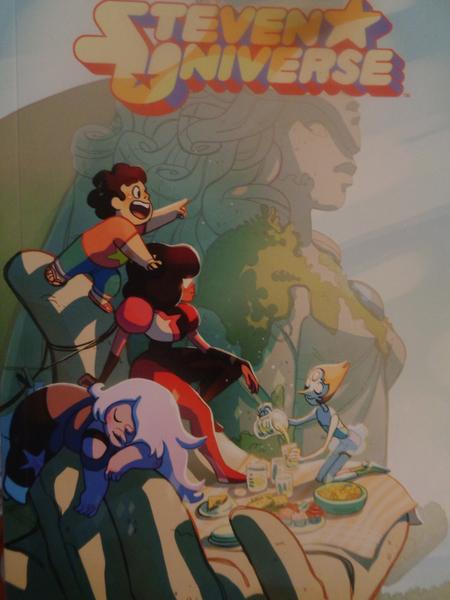 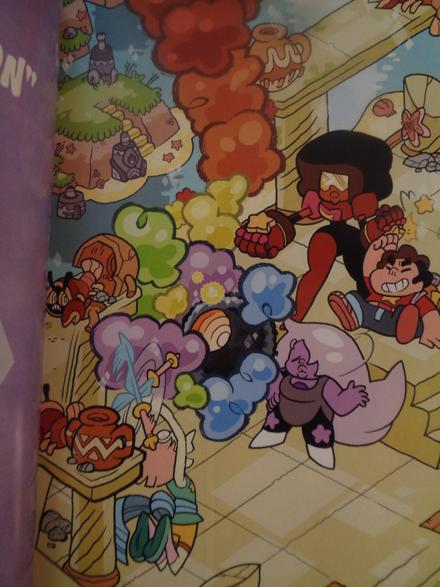 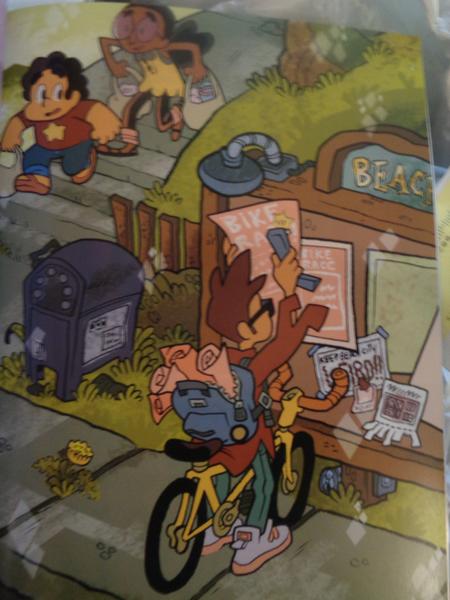 I’m going to give a heads up that there may be some small spoilers, but I will refrain from giving away too much as I like to try to keep the readers interested in picking up any comics and indulging themselves. The comics are considered canon to the show itself unless of course the show does something to negate what happens in the book. But don’t let that stop you, as the stories in Steven Universe the comic are every bit as enjoyable as the show itself. Personally, I dove straight into it, like I did the show. When I first started watching, I threw myself into six episodes back-to-back, and for the comic, I went with the first graphic novel so I could throw myself into the first four comics back-to-back. The first story is titled “Vacation,” and it picks up right after a battle between the Crystal Gems and a corrupted gem. Pearl ends up stuck holding the C.G. and not able to bubble it to return it home as it is too heavy. When Pearl mentions they will have to carry it back, Steven suggests taking a small break and going swimming instead. In the midst of the disagreement, Pearl drops the C.G. and it instantly tries to reform.

In the fourth and final story in the trade paperback, Steven offers to help the local townspeople by opening up his own inter-dimensional taxi service. What starts off as a great idea in theory, shortly turns into disaster, and sooner or later, Steven will have to learn that he can’t force people, or lions, to do something they don’t agree to do. Each comic also comes with a couple of small short stories as well as fun little one page ads or games. One of the ad pages was for an everything bagel dog! I’ve already put that on my list of things to try for lunch. The short stories range from Greg asking the gems to bake Steven a birthday cake, to Steven attempting to enter Lion in a pet show. 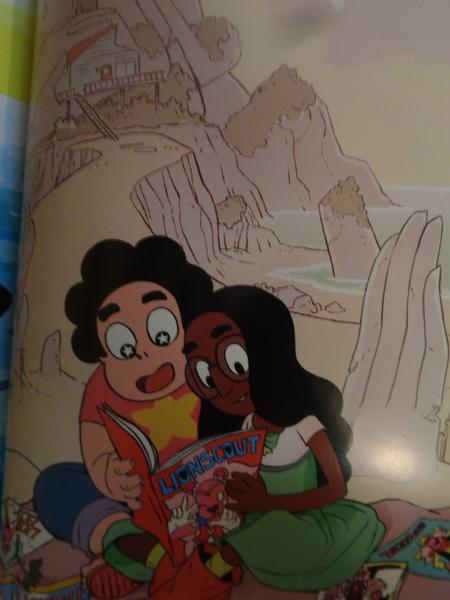 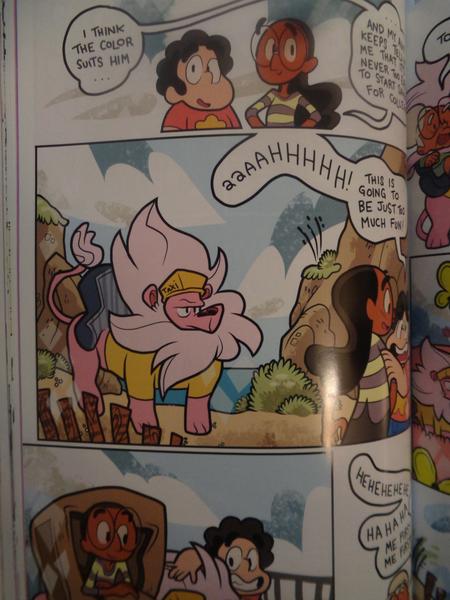 Hello everyone, and welcome, once again, to The Next Issue. Today, I’m following up on my first fan requested topic of Steven Universe. It comes from Taintie on Patreon.  Thanks, Taintie!  If you haven’t watched the related video yet please feel free to take a moment and check it out. One of the the things I mentioned in my video was that I’m fairly new to the show itself, and, as such, there are probably several things I’ve not caught up on, but twenty-five episodes in to season one, as well as catching several key episodes throughout season two (not to mention having a wife who is obsessed with the show), and I’m anything but clueless to this subject. I’ve laughed, danced, and even been brought to tears by these eleven minute episodes, and I can’t wait until I’ve seen them all! With this said, the topic itself is about the comic book series, currently brought to us by Kaboom! 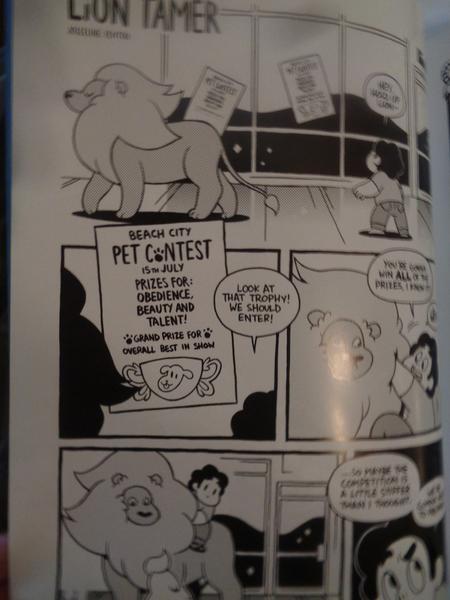 The third story is a Greg story, which is actually a guilty pleasure of mine. Anytime I see Greg or watch a Greg/Rose moment is always awesome. He tries very hard to be a good dad while also keeping his distance so as not to hold Steven back from mastering his gem abilities. “Open Mic” is no exception, as the story follows Greg as he begins to miss his musical lifestyle. While helping his son on a mission with the gems, he notices the local donut shop is holding an open mic night. After some thought, he decides to enter, but unbeknownst to him, the gems are tracking a corrupted gem with the ability to cloak and an affinity to certain sounds. 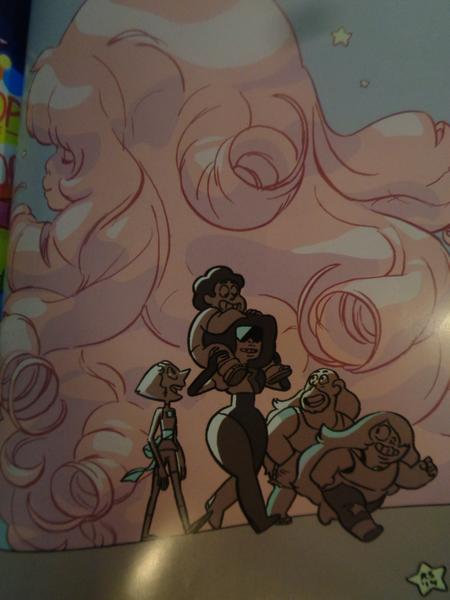 This book is full of good humor, fun art, and just plain wild imagination. If you’re already a fan of Steven Universe, you should definitely add this to your collection! Sadly, the lack of any intro in the first issue to the characters at hand is the only drawback. The Steven Universe comic does not give any description of the characters, why things are they way they are, or who anyone is. While the show started off in a similar way, after the first couple of episodes you have a decent understanding. With the comic, however, it doesn’t work quite the same way. But as I’ve mentioned before, this is the ONLY drawback I can find with the book itself, and, therefore, is not much a drawback at all. In today's age of social media, web broadcasting, and wiki’s everywhere, gathering up the little bit of back story you need is NOT HARD. I strongly suggest giving Steven Universe a shot. You will not regret it. At its core, Steven Universe is a tale of a war-torn family coming together in moments of need, and the heart of the family is Steven himself. From Steven's time bonding with his father, to going on adventures and being saved by the the other Gems, to training to be more skilled in his gem powers, to learning more about his mother and his family's past and always making new friends along the way, to saving the planet, he is a great character. And that's why the people of this world believe in Garnet, Amethyst, and Pearl......AND STEVEN!

Story two is a tale of a bike race in Beach City. An X-treme bike race to be exact, and Steven wants to enter. Of course, the Crystal Gems show their protective side and try to convince him not to race, but once Steven makes up his mind, all the Gems can do is try to figure out a way to keep him safe without being in the race themselves. This leads to some very laugh out loud moments as all of the Gems put what they think will keep him safe on his bike.