Most people thought he was Scooby Doo.

The tough part about this was that I was helping my sisters make their costumes too, which I always do, but still. There was no way to make an entire Joker costume, so I bought a pair of dress pants for him that didn’t match at all (hey, it’s just Halloween) and made the coat. I finished it in two days. It was my first time using a already-made pattern, AND I’d had to modify it to make it the correct style. I finished it just in time for my parents to get agitated that it was time to leave and we hadn’t done so yet. 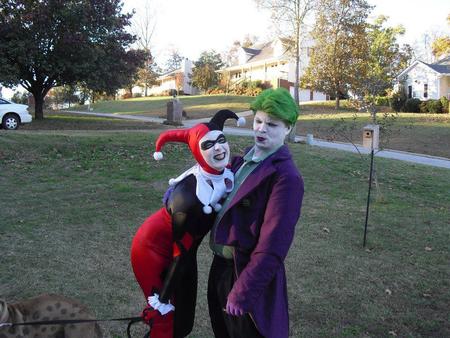 At the end of the day, it was a laughable Halloween. I got the candy my sisters didn’t want, had a few fun conversations, the basics, you know?

Throughout the entire day, I’d spent way too much time painting my dog, Knox, as a hyena. He wasn’t a fan. I had a tiny container of grape Kool-Aid and the littlest amount of water possible, paired with a sponge, randomly attacking him to put spots on him. Knox hates things that smell too much (like, well, Kool-Aid), but I’d only had him for six months at that point and didn’t understand everything he hated yet. I learned about that one towards the end of the painting when he was whale-eyeing my sponge as hard as he could.

So, every year I go out trick-or-treating with my siblings. I’m the eldest of four, and there’s a twelve year gap between myself and the youngest, so despite the fact that I’ve not actively asked for candy from strangers in years, I’m out there with everyone else. I stopped trick-or-treating when I was sixteen, less because I wanted to and more because I felt like I should. It wasn’t even my age that did it, it was the fact that I live my life with people thinking I’m older than I am. When I was eleven people thought I was eighteen, when I was sixteen people thought I was twenty-six. Even now at twenty-three people think I’m in my mid to late twenties, or maybe even my early thirties. I’d be offended but I’m an old lady at heart so I understand.

This was an hour later and he still looks unhappy. That’s probably because of the gentle leader, though...

I digress. Anywho, in 2012, we went trick-or-treating like normal. That year, we started getting big into My Little Pony: Friendship is Magic, so two of my siblings were dressed as Ponies (Rainbow Dash and Twilight Sparkle, respectively), and the youngest, I believe, dressed as a witch. I decided to recycle my Harley Quinn costume from the year before, and make my now-husband a Joker costume.

Which I would understand if he was taken out of context of the group, but Joker, Harley, and Scooby Doo does not a Mystery Crew make.

Aw, how cute is that?

Nothing like scuttling away awkwardly dressed as a crazy clown lady hoping no one saw anything. 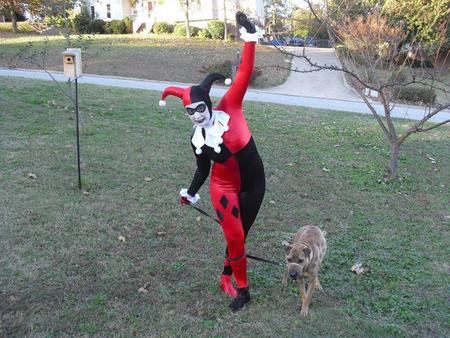 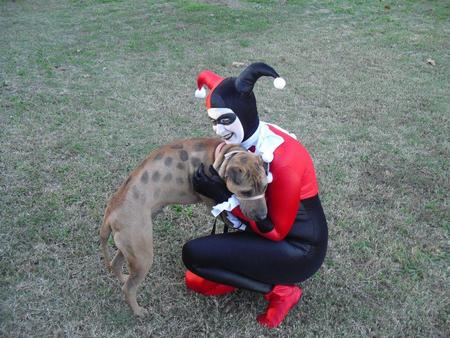 All donned and ready to go, we went across to a friend’s neighborhood, going up to strangers and asking for tiny bars of chocolate. I didn’t have a bag of course (I was just there to look pretty), but a few people gave me candy, complimented me on my costume or praised my dog. Everyone recognized the Joker, a good deal knew who I was. One person understood what my dog was supposed to be.

Also Knox pooped in someone’s yard. That’s okay until you realize you don’t have any bags because unitards don’t have pockets, and since he pooped already you didn’t think he would again...