Now, using different materials like fake hair can be a game changer, and we’ll talk about that more in another article down the road. Until then, have fun with this new knowledge and go make something adorable!

Vaporeon strays the furthest from the basic equation of the wig type, and I hope that shows you how endless the possibilities can be. There are some obvious choices of characters here, such as the Cheshire Cat (Alice in Wonderland), Shere-Khan (The Jungle Book), or Wilykit and Wilykat (Thundercats), but there are plenty of not-so-obvious as well. Basically, any fuzzy wuzzy little animal character you have had a secret desire to cosplay as is now fair game, with this knowledge under your belt.

Yes, you are looking correctly, it’s Eevee and the original three evolutions. Much like Rocket, these wigs could easily be made with yarn (yes, even Vaporeon, if you want to go with the slightly fuzzy route I chose for this illustration). Eevee, Flareon and Jolteon would work best using the faux fur ears I mentioned above, especially due to the size and shape that would be involved for the characters. Vaporeon is the trickiest (and of course it is, it’s my favourite), using a variation of the rolled ear wig seen above and lycra ears/fins. 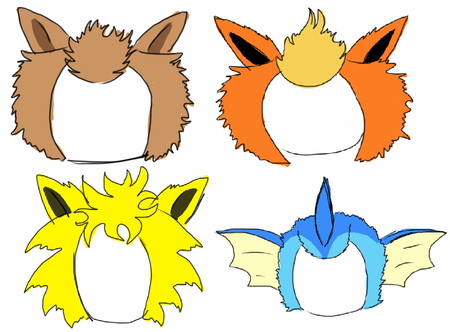 Rocket Raccoon! He’s super popular right now, and while my favourite method for cosplaying as him would be the mascot head route, a wig with facepaint (and even a snout prosthetic!) would work very well also! This kind of wig would either require some creative layering, or hand painting, or both, but would be easy to do and yield rewarding results. The ears could either be done using yarn like in my video, or made using faux fur and painting it to match the yarn. Either method would work, though I do think the faux fur method would be the way to go. Faux fur ears look super cute on something you want to give kind of a realistic look to! 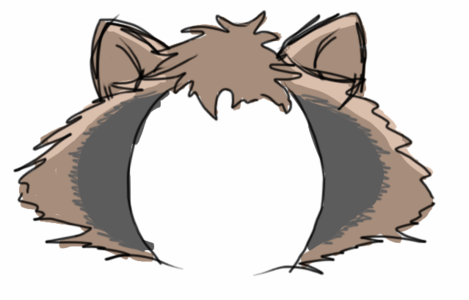 Here are some quick wig sketches I’ve made for a few popular characters you could make using yarn as a wig material. These are characters I hear people wanting to cosplay as, but they don’t want to go the full mascot style mask route and end up floundering because they don’t know what to do. Let’s take a look.

There’s a lot more out there than that, as different touring productions in different companies have taken their own liberties with the designs. From Japan’s ‘butterfly’ style ears, similar to a papillon, to the Swedish productions completely off-the-wall designs, the sky is the limit. If you do a quick google search, this will quickly open your eyes to see how versatile this is!

So, from left to right we have a full wig with rolled ears. This is usually used more for ‘older’ characters. The fan eared wig on the left is a personal favourite of mine as far as styling is concerned. It makes a very elegant look, and, strangely enough, even without ears it is so undeniably "cat!" The bottom one is a rolled ear wig, usually used for characters who tend to be aloof and often mystical in nature. It’s a very cute, tight wig, with not quite as many uses outside of the CATS fandom (though I have seen a few), but it’s a favourite of mine and I feel it deserves a mention. 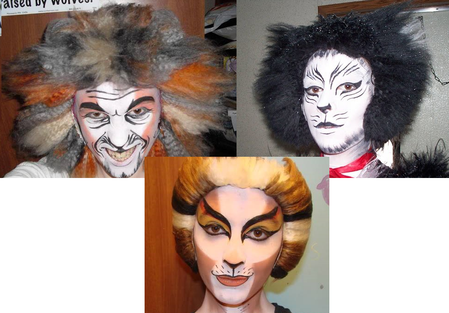 Big and boofy, kind of everywhere, but still definitely "cat," am I right? Well, CATS has a few more tricks up its sleeves as far as style is concerned. Here’s a couple more. 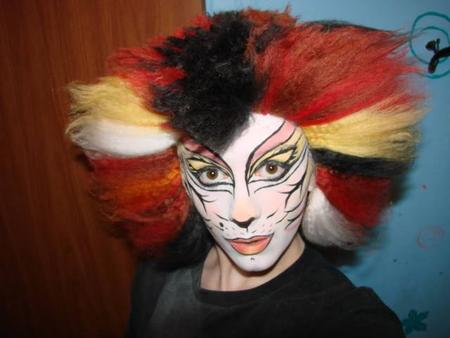 Now, this style of wig isn’t exactly my favourite, but it has its place so I use it when needed. I actually prefer a more ‘Broadway’ style that is bigger and more organic. My wigs tend to be on the bigger side anyway, because I have broad shoulders, and in order for the costume’s magical illusion properties to work right I feel like I need a bigger wig, like this one. 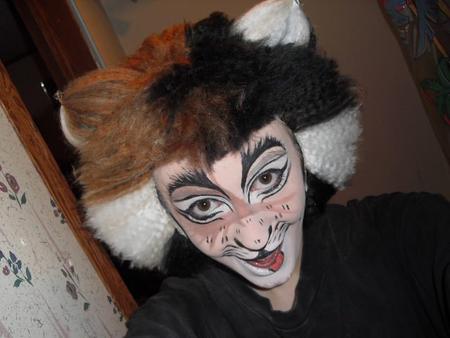 Firstly, the wig I did in the video is what I call a ‘London’ style wig. It tends to have shorter fibers on the sides and tight, well defined ears. Here’s another example of a London style yarn wig I’ve made.

In fact, nothing about this is exact and that’s why I’m telling you about it. So let’s talk a little bit about some of the styles you can choose from, just within the CATS specific spectrum.

You saw how I made the wig, but the styling portion was a little lacking. The reason for this was because styling is so free form, there’s no reason for me to tell you a whole lot of specifics. It takes a while to style a wig, and at the end of the day it’s just a lot of snipping and staring at it, deciding if it looks like how you want it to yet. Not really an exact science.

Hello Everyone! So today’s topic is a continuation of our CATS style wig tutorial we saw last week. This is kind of an information portion, a little bit of the potential behind what you can do with this wig style and why I posted that video. The amount of CATS cosplayers are kind of a small group, and there are enough tutorials and people out there giving advice that I didn’t do it for them. I did it for those of you who don’t even know you need to know about this costume accessory! There is so much potential for this type of wig that has nothing to do with being a cat. Okay. Not entirely nothing...