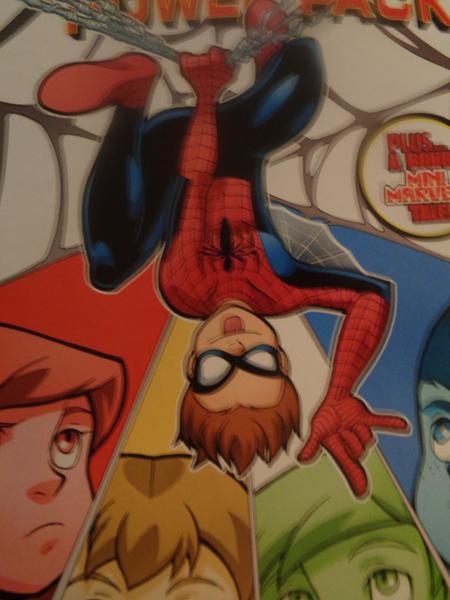 So that’s it for me this year. I’m hoping to see all of your costume designs and ideas, and, once again, I hope that my month of suggestions has helped or inspired you on your own march to Dragon*Con. Oh and one last thing: dressing up the kids is a MUST.

What the front looks like is what the back will look like as well. So no need for more and more reference pictures. Amazing Spiderman has a Red Spider on a blue backdrop on the back, Iron Spider has a yellow backpack where his arms fold in and out, and Superior Spiderman has a straight up black back with nothing there unless you want to put a black back pack for the arms. Only three of these costumes benefit from using a metalic spandex for that futuristic, shiny look. Those would be the Iron Spider, and both Spidermen from 2099. All of the spiderman costumes also benefit from your own personal touch on the eyes. Over the years, Spiderman, in all his forms, has always been able to make facial expressions with those giant eye pieces, but we are not comic characters... at least not all of us, and so we must custom make those eye pieces to make the expression we want people to see! Of course, you will also have to be creative on those eye pieces for functionality and continuity. One of the best Spidermen I’ve seen was a Spiderman 2099 that looked like he had taken one of those faceless masks from a halloween store and cut the pieces off and put them in his mask. These faceless masks are 1 way masks, so the person looking at you can’t see your eyes or face, but you can see them. It was awesome looking.

So now that I’ve given you my last minute costume ideas, let me go over a few things about these. One of the reasons I’m suggesting these at the last minute is because they are one piece body suits. Only with the Iron Spider, Reily Spider, and Superior Spider do you have to worry about any extra pieces and even then they can either be ignored or they are very small and quick to make as well. Iron Spider and Superior Spider both only use their arms in combat, so walking around without them wont look that off. And if you want, later on it would not be hard to add them in for your next convention. Ben Reiley has the wrist web shooters for his impact webbing. These obviously don’t have to be functional, just look the part. With all of these costumes, minus three again, the front and back are exactly the same.

Now this one is one I’ve yet to see and will have to pull off myself at some point. To give you an idea of the back drop to this outfit, let me explain its owner. You see, that's not Peter Parker under that mask. Heck, that's not Peter Parker in that Peter Parker. Ok, I’ll stop being confusing. You see, in an ultimate struggle with death, Otto Octavious (also known as Doctor Octopus) found a way to swap his mind with that of Peter's. So this is Doc Ock in Peter's body. He has a few similarities to both the Ben Reiley Spiderman and the Iron Spider with the large dark spider on his chest and the use of mechanical arms from his back. 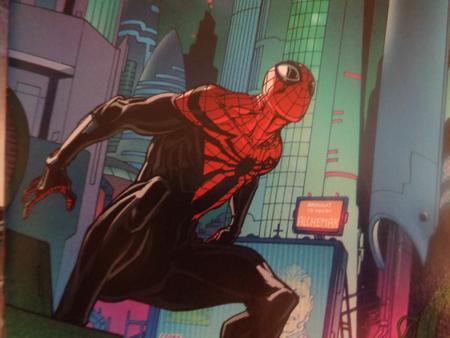 Of course, the ladies can be ultimate as well. In the Ultimate Universe, Peter had his own version of the “clone saga.” But instead of Ben Reiley, we were introduced to a female clone of Peter. She became that universe’s version of Spiderwoman. 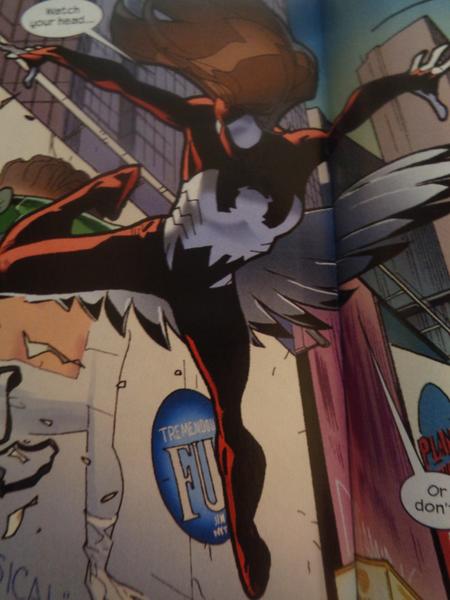 This is the Spiderman of the Ultimate Universe, a much darker version of the universe we all know and love. Here Peter Parker died saving his loved ones in a battle with Norman Osborne. In a strange and yet similar set of events to Peter's origin, Miles Morales gained his own spider powers and took the mantle of Spiderman. Also like Peter, Miles has gained his own large fan base. Where once this outfit was almost never seen, nowadays there are almost always several Ultimate Spidermen running around. 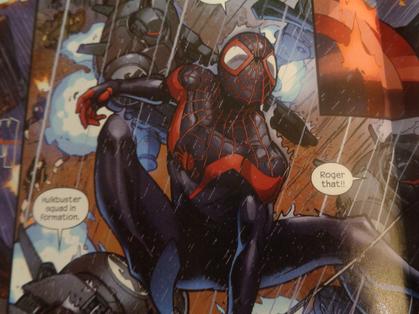 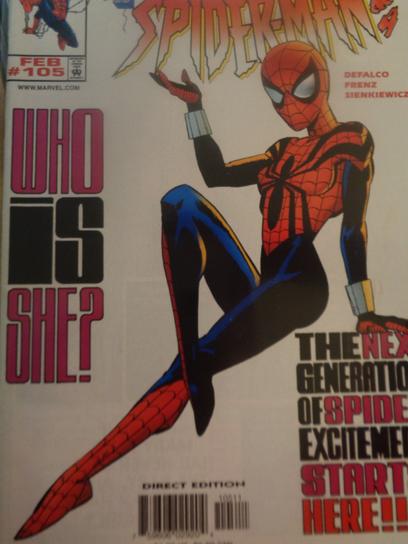 Of course, later in the same arc, Ben would eventually take over as Spiderman, but he still came up with his own design for the costume. In a fun little twist, this same costume was used for the Amazing Spidergirl! 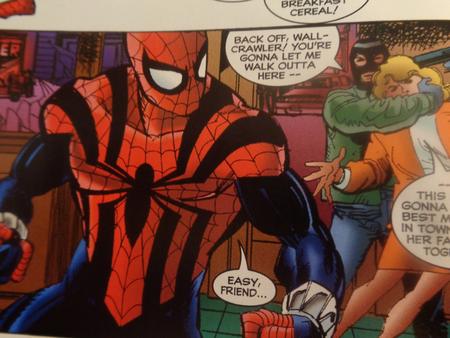 And for those of you who already know and love Spiderman 2099, here's another one from left field. Miguel had his own “clone” for a very brief, two issue, time span. This Spiderman has a very similar, albeit reversed, costume to poor Miggy, and a much bigger web cape to boot. 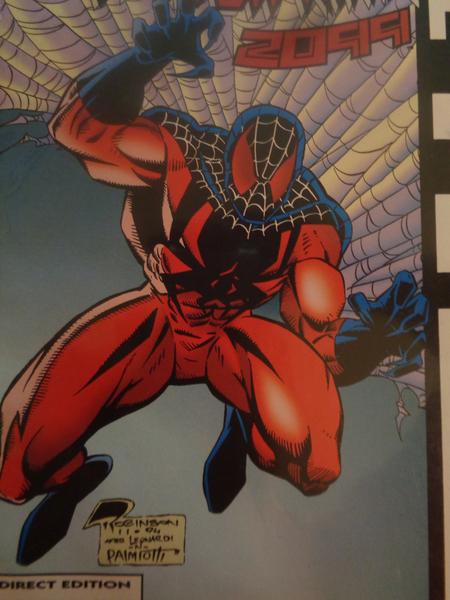 So let me touch base on other Spidermen besides Peter Parker. Miguel here is by far my favorite Spiderman in the Marvel Universe. This particular outfit of his is actually a costume he bought to celebrate the Day of the Dead festival. It’s made of special molecules that practically keep it indestructible, and it stretches so that he can use his finger and toe talons (yes you read that correctly) without ripping his costume. The back also has a web cape that goes down only to his waist, though it holds no practical use. 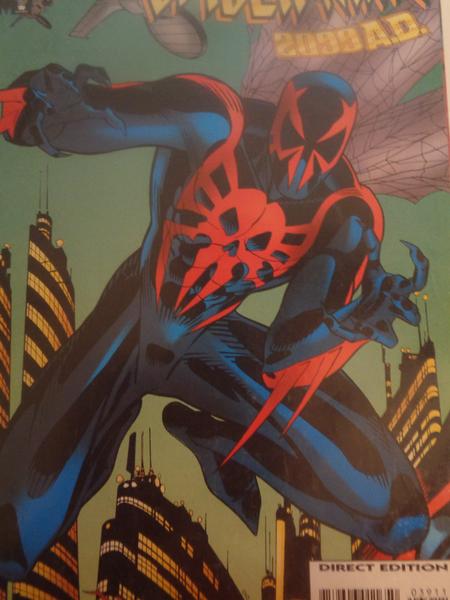 Of course, then came the Civil War and Peter returned to his old duds, but for a while there, Peter was near unstoppable with this particular outfit. 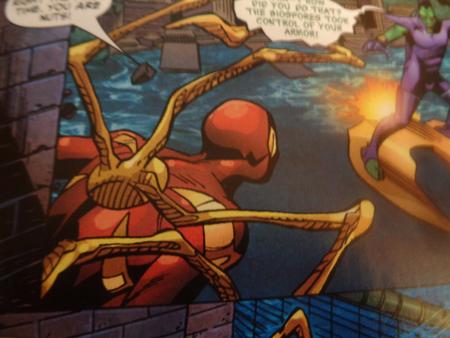 Ahh the memories..... ”ahem” anyway, this particular outfit should look familiar, or at least the color scheme should. That’s because this outfit was designed by old Tony Stark himself. You see, once Spiderman joined the Avengers, Tony and Peter became best buddies. Stark fashioned an Iron Spiderman armor for him to wear that came with extra arms that came out the back. 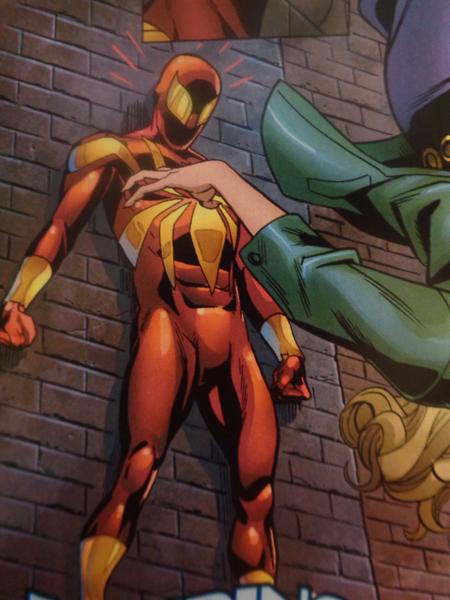 This one is yet another “classic” outfit from Spiderman's wardrobe. A very fun piece to play with as well IF you are pretending to be affected by the alien symbiote. You see, there was a time where Spiderman’s outfit was destroyed while on an epic mission in space... a Secret War if you will... and Peter needed something to wear to hide his identity. He was given a special costume that bonded to him and had amazing abilities on its own. Later, Peter would discover the costume was a living symbiote and detach himself from it.  Also fun to be a ninja once night time hits though do be careful to be seen when you should be seen so that you, or others don’t get hurt or in trouble. 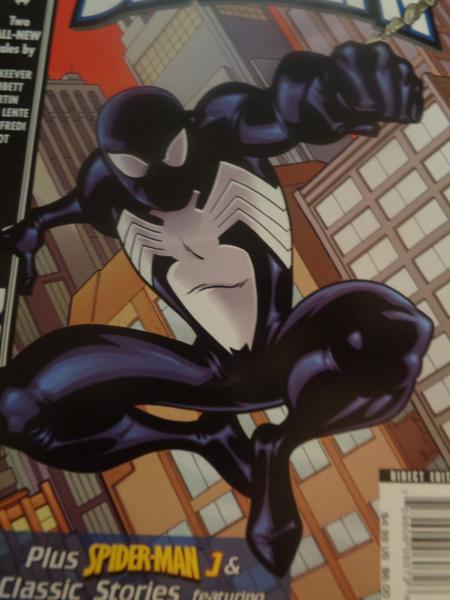 Of course I’m going to start off with the most well known there is, the Amazing Spiderman. A Simple red-and-blue design with a black spider on the front and a similar one on the back, you can’t beat the classic, though the classic is one of the ones that you will see many times over at any convention.

No matter what the convention, you will always see plenty of Spiders roaming the halls, and this year I expect nothing different. But as I’ve done with all the articles and videos I’ve given this month, I've come with a sample list of different Spidermen and women to give a shot so that you will stand out in a crowd of Spiders! Couple that with the fact that all of these Spiderman outfits are one skin tight body suit and not multiple pieces, armor, or what have you, and you have yourself potentially an easy to cut, sew, and stitch body suit in a couple of days. Without wasting any more of your very valuable time, here is my list of potential Spiders for you to bring to the party. 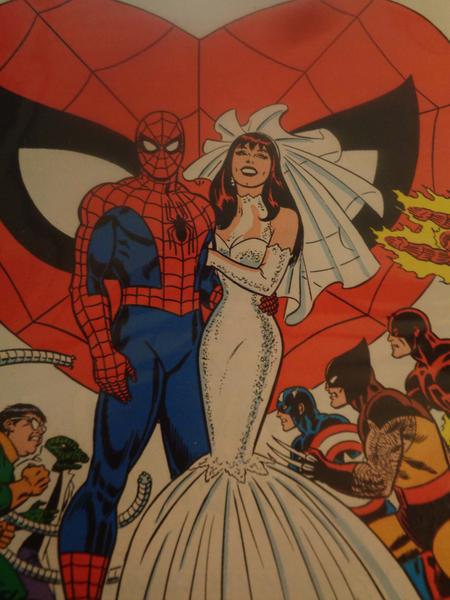 Welcome all my fellow comic fans, and, for this month at least, my cosplay enthusiasts, to another grand week of The Next Issue. We are nine days away from one of the largest gaming, anime, sci-fi, and comic conventions of the year, and this week, I bring you one last list of suggestions for all you cosplayers out there. Now, with nine days, what on Earth could you possibly still have time to make you may ask? Well, I went down my list of amazing, spectacular, ultimate, and superior characters and came to one very logical conclusion. Why, your friendly neighborhood Spiderman, of course!

The March to Dragon*Con: The Final Days