Of course, Otto didn’t change bodies just to get a degree and start his own company (though that's not a bad reason to do so if you're changing up from a dying body to a young, vibrant one). No, he also began changing Spiderman's gear, adding the robot arms missing since the Iron Spider days, building thousands of spiderbots to scower the city in search of criminals and wrong doing, and even setting up a base (Spider Island) and hiring henchmen... A spider army to help keep the city safe. The ramp up in gear, armor, and money, though, came with the cost of Otto’s ego. While swinging by a burning building with people inside, Spiderman would go right by stating, “That is what firemen and law enforcement are for,” and “I cannot let the small events deter me from the real threats.” When pushed hard enough, he publicly executed a villain, and when questioned about his recent life choices, he flat out quit the Avengers. Now before anyone asks why someone didn’t think all this was a big enough reason for someone to think, “This can’t be our Spiderman! We need to stop him,” part of Otto’s mind swap technique allowed Peter's memories to stay within the brain, thus Otto would use it like a computer hard drive. Captain America, Iron Man, or even Mary Jane asking too many questions? Just tap into memories only they would know you would know and blurt it out.

Whew! I think I’ve covered a decent amount this time around. Hopefully everyone enjoyed this fun, little piece. Thank you all for reading and watching my videos and I hope to see you all again for The Next Issue!

So, unlike most titles given to characters over the years, the title of “superior” has definitely been a huge game changer when laid upon the shoulders of characters deemed worthy enough to have this. One would think with comics titled Amazing Spiderman, Incredible Hulk, Fantastic Four, and so on that the descriptive term added would be just there to grab peoples' attention to get them to buy the book. And while you are not wrong in thinking that, this time around, things have changed. You see, to have the term “superior” before your name is not simply to have a new ongoing series given to you; it is not simply to add flair to one's name, the likes of which has not been given to anyone before. Going by the two characters who have received this moniker, it is to truly become superior to all you have been before but at the cost of your morality in some form. Not necessarily becoming evil per say, but to at least reach that point where you truly feel you are superior to all those around you.

Hello, everyone, and welcome back to The Next Issue! It has been a while, but thanks to Xakor on Patreon, I get to return in superior style! Now, while the main topic chosen this week was specifically the Superior Spiderman, I figured I would also touch base on the superior title itself as well. Seeing as how only one other character has used this title, it will not add a super large amount, but I find the price of what comes with this title to be very interesting. 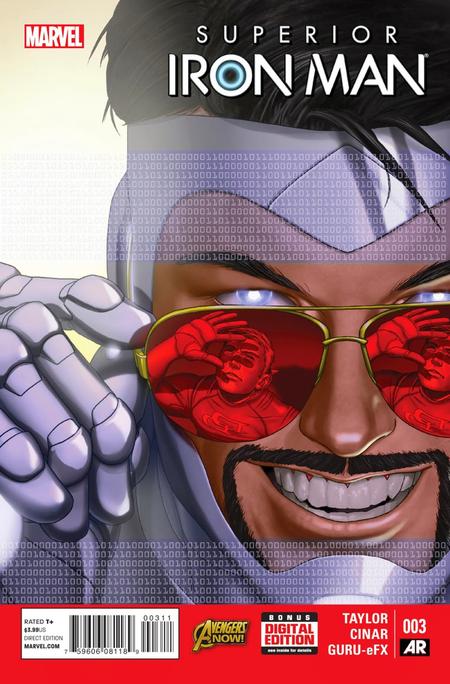 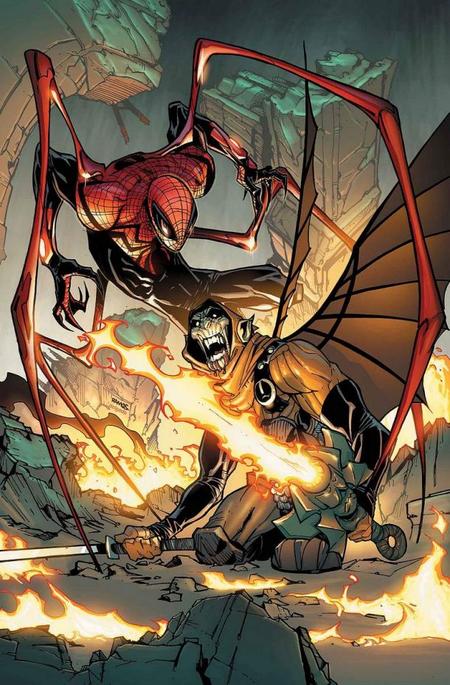 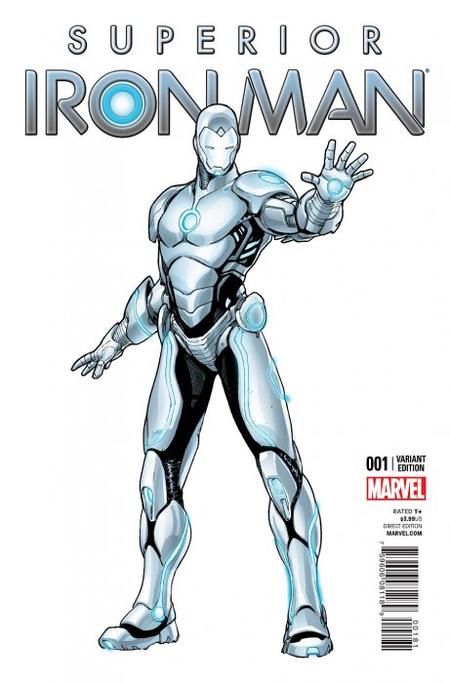 While others went straight from good to evil or vice versa, Tony became a lot more of what he used to be: the alcohol drinking, playboy billionaire with a HUGE superiority complex. This led to not only the creation of his greatest armor, since he was holding NOTHING back this time, but to a huge moral decision that to him... wasn’t that huge. He dropped the Extremis virus 3.0 on the entire city of San Francesco, essentially causing everyone to become heroes and immortal. Then he turned it off remotely and charged anyone who wanted to keep it going a very hefty sum. Unlike Spidy though, Tony never really got the chance to redeem himself. Instead he was one of the ones wiped out and rebooted thanks to Secret Wars, and now the current Tony no longer has that armor or the same superior mental status, which is probably a good thing because there weren’t many who would have been able to properly stand up to the Superior Iron Man after that.

Over time, the Marvel writers knew they would be bringing Peter back. And one of their trump cards was the fact that his memories were still there, thus Peter's subconcious was also alive and well. At the end of the day, the mind can be swapped, but the soul is still intact! What they did not anticipate was how popular this version of Spidey had become. Superior Spiderman was the reboot they did not know they needed. Brand New Day eliminated much of Spiderman's lore, and many of his readers as well. Superior Spiderman gave them the ability to have the unmarried Peter Parker character, the brainy scientist, the businessman, everything they wanted and only 1/3rd the hate mail! We got to see Otto trying to be a better hero through not only his own book, but the summer cross over, Age of Ultron! We got to see him be the leader of the team of multiversal Spidermen in Spider-verse! We even got to see him pull an alternate universe uncle Ben back to the fight when Peter himself could not! When you sit down and read the entire run, you come out at the end knowing this version of Spiderman really is superior. All the threads Marvel tries to shove on us to make us see the “cracks” in his good guy persona just seem so forced right to the ending itself, unfortunately. I covered a bit of it in the video, soI won't go into every little detail here. You owe it to yourself to sit down and read the tale of the Superior Spiderman! You will not regret it one bit!

For Spidey, getting the superior upgrade was a life changing, mind altering, destiny revamping affair. For Peter Parker to be come the Superior Spiderman, he had to die. At least his mind did anyway. In the final days leading to what was one of the most shocking Spiderman stories to be written in years, Doctor Otto Octavius swapped minds with his nemesis, leaving poor Peter in Otto's dying body. And when all looked like Peter would reverse the process and make a heroic return, fate had a different idea in mind. Peter's mind passed away inside Otto’s body, leaving Octavius’s mind inside that of Spiderman. But before he passed, Peter reached through the mind link they shared one last time and forced all of his “life lessons” upon Otto, thus shifting him to want to be a better man, a better hero, a better Peter Parker, and of course a Superior Spiderman! This is where the moral cost of the title kicks in, as we are not talking about a book called “The Superior Peter Parker,” although he did try his hand in that as well. No, it was the character of Spiderman himself that was given the moral change in order for him to receive his superior power. You see, Peter's spider powers stayed the same the entire time, but because Otto was ever as much the genius (if not maybe a little more so) as Peter, he decided to amp up Spiderman's arsenal and game plan on how he handles villainy. See, Peter was always worried someone would put two and two together and blow his identity out of the water, thus he always hid his smarts away in photography. What started out as a quick way to score cash quickly became an easy cover up for him. Who would think Peter Parker would have the brain power to make web shooters like Spiderman? He’s just a photographer! After Brand New Day, Peter did make a few job switches, but it wasn’t until Otto took over that "Peter Parker” went back for his doctorate, started Parker Industries, and all round started showing that Peter Parker was a brilliant scientist!

Of course, with a title like “superior,” Marvel did a great job making you feel that to a tee. Another wonderful example is the Superior Iron Man. The mighty Tony Stark finally dons what is probably his greatest armor, the Endo Armor or Symbiote Armor as its also known. This suit, made of liquid smart metal (yes, I just typed that) hardens instantly on connection to the human body. The start up to this suit is all psionic which lets Tony control it mentally. Seriously, it is the be all, end all of Iron Man armor and if you want to see it in action you need to pick up the collection of Superior Iron man and read it now. Just remember that with the “Superior” title comes that wonderful price. Poor Tony was involved in a little story line called Axis, where the Red Skull (using a grafted part of Xavier's brain... Yeah I typed that, too) creates an inversion wave that changes everyones alignments or morals. Tony is one of the ones hit with this wave, and at the end of the story, he is also one of the few that does not get changed back. 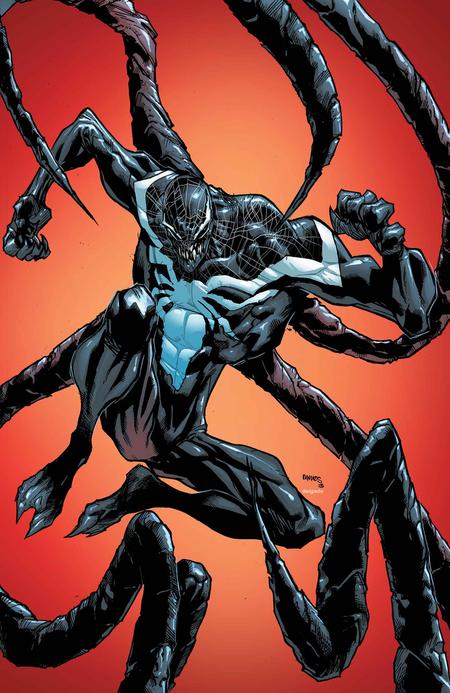 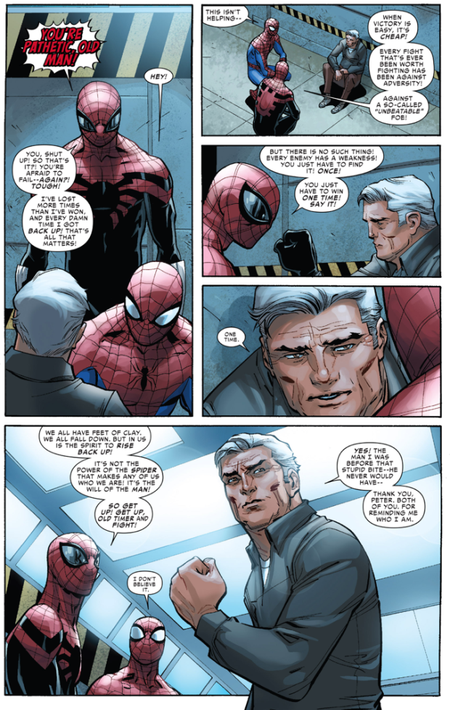