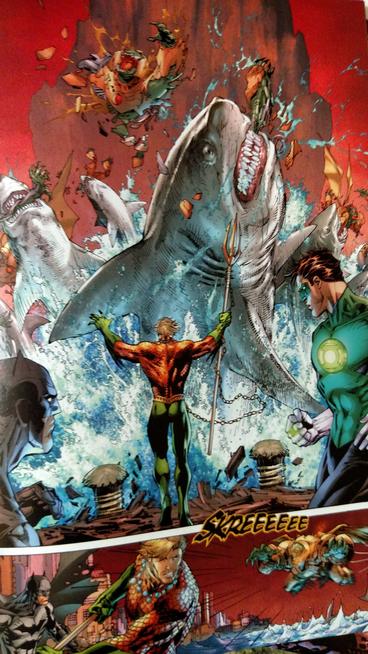 For more summer-time comic book fun, check out this video on mutant sharks! 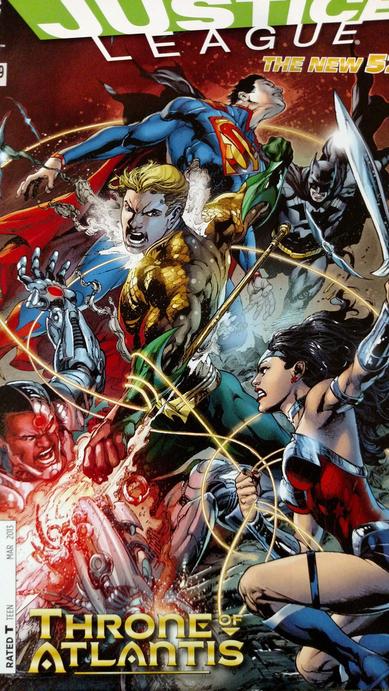 By the end of the fight, Arthur takes his brother's place as King of Atlantis, and Orm is placed in prison. You would think this is a good thing, yet due to the actions of Atlantis, all humankind now fears them. No one trusts Atlanteans at all, while the Atlanteans continue to distrust the surface dwellers. To compound this, the Atlanteans do not trust Arthur either. They view him as having lived on the surface too long, and having been corrupted by it. Everyone keeps asking him, "Whose side are you on?" which, to the characters in the book, is not very clear, but to all of us as readers, is obvious he is on all sides. Arthur is the one barrier keeping humans and Atlanteans from all-out war. He is the only person fighting for peace between both races. This is someone who, only 5 years ago, was not taken seriously at all. Now he is a king of a kingdom that takes up 70% of the planet. He is powerful enough to fight Superman, Batman, and Wonder Woman, and no matter what anyone says or thinks about him,
he continues to protect everybody. Aquaman has come a very long way over the years, and there's a reason his book has been one of the few that stayed around since the New 52 began. Where other titles have come and gone, Aquaman hasn't stopped, even getting a second title for a short time. Aquaman and The Others followed his adventures with a team he formed years before the Justice League. You read that right, Aquaman has ruled Atlantis AND had his own world saving team long before the Justice League ever decided to form and save the planet. In other words, if you have not picked up and read Aquaman lately, you are missing out. I'm the Power Trip and come back next week for The Next Issue! 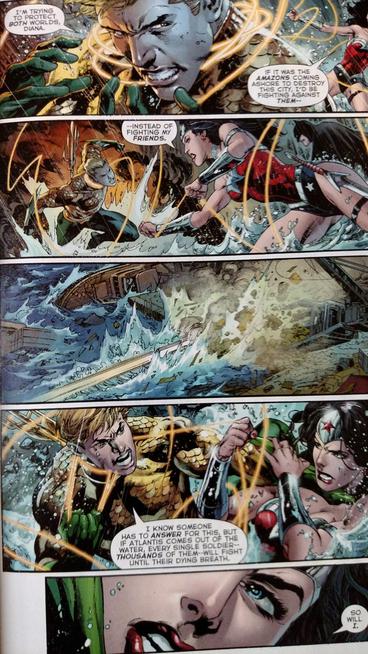 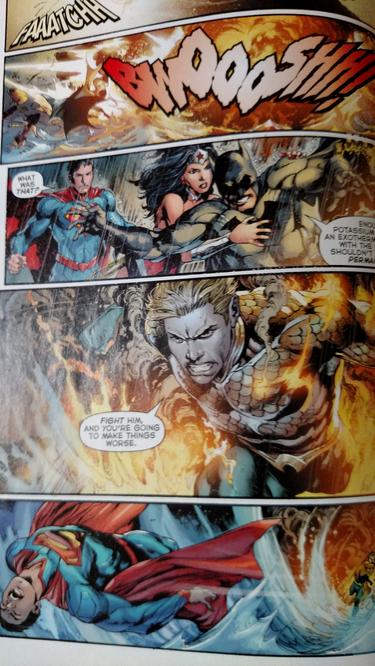 This would be the bar set for Arthur to rise above. Over several issues, no matter what he did or whom he saved, everyone still looked at him as a joke. Skip ahead to the "Throne of Atlantis" arc. Someone hacks into an aircraft carrier and fires several missiles at Atlantis. Atlantis responds by flooding Boston, Metropolis, and Gotham. This is followed by Orm (Arthur's brother and King of Atlantis) leading his army to destroy what's left of Boston. Aquaman is placed between the world in which he was raised with the friends he has made, and his people, led by his brother. This story not only shows how powerful and wise Arthur is, but also the weight he is willing to carry
on his shoulders. He begs the Justice League to give him a chance to talk Orm down, but Superman, Wonder Woman, and Batman don't let him finish. Before Arthur can convince Orm to back off, the big three decide to take Orm by force. Aquaman proceeds to knock down Superman with one punch, and drop Wonder Woman while Orm takes out Batman. Before the Atlantean King can finish The Bat off, Aquaman saves him. The whole of the fight becomes a balancing act for poor Arthur. 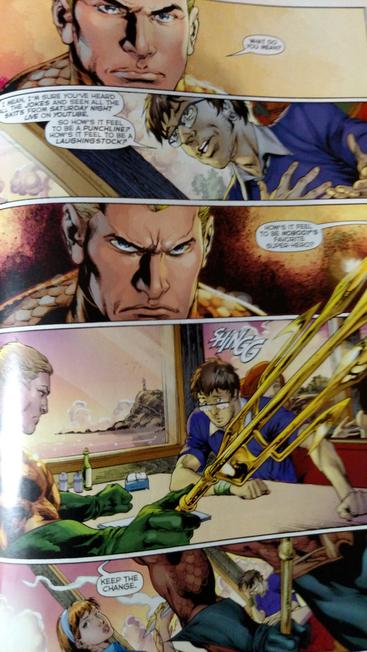 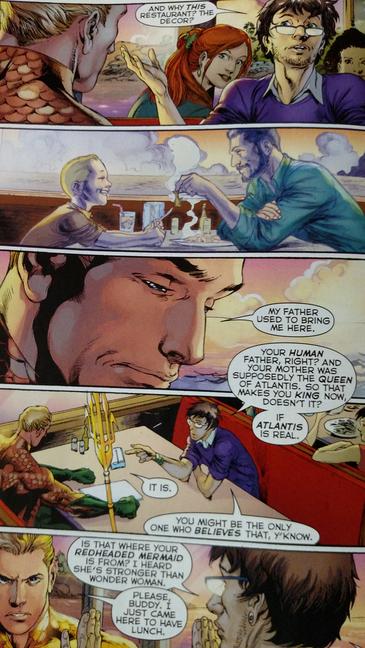 The second part of this issue takes place heavily in a diner. It's here we find out Arthur's origins through flashbacks and an interview being held by a blogger. Arthur is the child of a human and the queen of Atlantis. He was raised by his father on land and thus understands why people think of him the way they do. The blogger
acts as the voice of the reader, asking why he is eating fish when he speaks to fish, and pushing about his connection to Atlantis and his outfit. We get some very awesome scenes here as Arthur's answers are either very direct or shown as a flashback. Arthur explains he doesn't talk to fish, but uses his telepathic abilities to push
sea life to do what he tells them. Think Charles Xavier, only strictly with aquatic life. He is also shown to have come to this diner as a child with his father, and he doesn't need a job because he digs up old sunken treasures and gold coins to pay for things. Finally, the blogger asks the one question most readers are thinking at this point. "So how's it feel to be a punchline? Hows it feel to be a laughingstock? How's it feel to be nobody's favorite superhero?" To this Aquaman stands, pays for the meal he never got a chance to eat, and leaves. 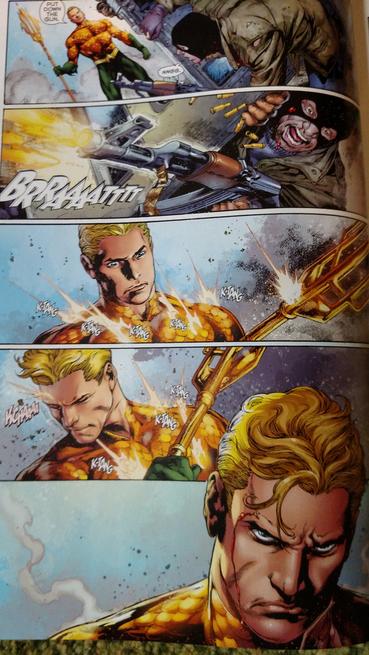 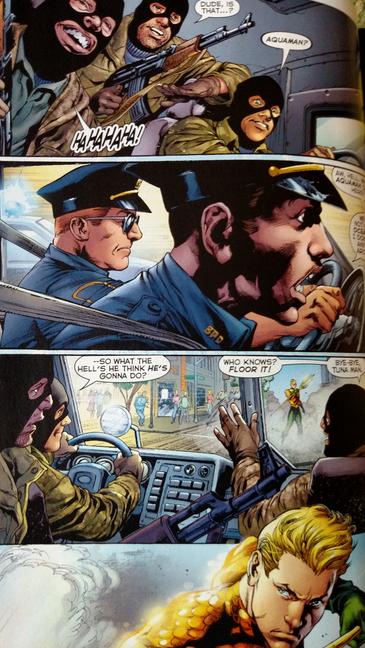 All of this was in just the first arc of the new Justice League. This is DC's flagship title, the one they take the most seriously. But JL is mostly an action movie filled with major explosions and great one-liners. So maybe Aquaman is best suited to a book such as this since he doesn't have the depth necessary to carry his own book? If you believe this, you would be wrong. In the first issue of his own title in the New 52, Aquaman shows he has more character growth and depth than the majority of the DC universe. The opening portion of the title sets the tone, and it's one you wouldn't expect DC to touch on. Police officers are chasing a couple of bank robbers when Aquaman shows up in the middle of the street. The police officers first reaction is "Aw, Hell. What's Aquaman doing here? We're not in the ocean and I don't see any fish around." The bank robbers have an even better reaction with no intimidation felt stating, "Dude is that Aquaman? HAHAHAHAHAHAHAHA." The criminals then speed up to run Arthur, down only to have him spear their vehicle with his trident and flip it over his head. One of the robbers climbs out and shoots Aquaman in the chest and head. We find out here that, thanks to the pressure of the deep, Aquamans body can handle bullets. 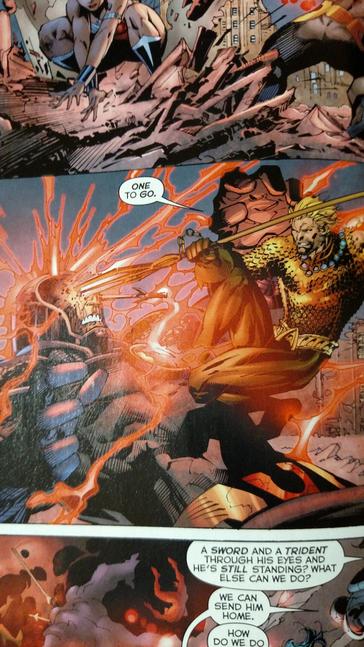 If this wasn't enough, he even gets the pleasure of taking out one of Darkseid's eyes! 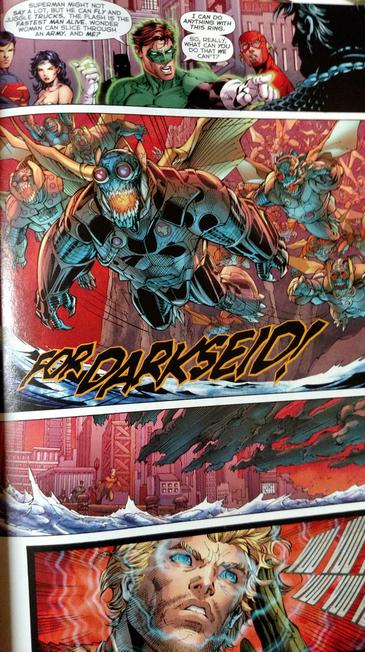 In the following issue, Green Lantern decides to question Aquaman's potential in their group, asking, "So really, what can you do that we can't?" Aquamans response speaks volumes as he turns to an incoming swarm of parademons, sends out a telepathic call, and summons out from the water several giant megalodon to feast on the parademons. 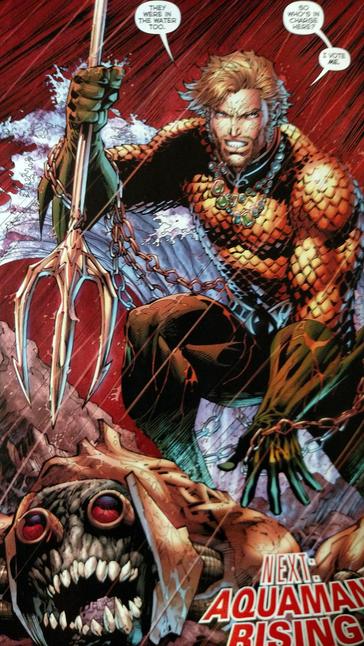 All this changed with DC's relaunch, the New 52. At first I was doubtful, not even having his comic in my initial pull list. But then came Justice League #3, and all of this changed. At this point, Superman, Wonder Woman, Green Lantern, and Batman have all just met during the invasion of Darkseid. Parademons have kidnapped
hundreds of civilians and are taking them to a fire pit generator out in Metropolis Bay. This is when we get our first taste of Aquaman as he comes out of the ocean, parademon at the end of his trident, and states "So who is in charge here? I vote me."

Hello everyone, the Power Trip here, and for the fun of summer, I am doing a beach theme for the next couple of weeks. What better way to kick such a thing off than with one of the most well-known, most amazing, and powerful ocean-based superheroes, Aquaman? I can hear everyone's collective groan, and if you haven't been reading him since the "New 52" era began, then I can understand. For years, this founding member of the Justice League has been one of the most put-down, laughed-at heroes in comic book history. When some of the things you're most famous for include: throwing a bear at people, having your hand replaced with a retractable hook, and being the strongest member of the Justice League Detroit (snickers), then you don't get to hold your head up very high. So why would anyone ever want to read about a superhero whose best known talent is talking to fish? I'll just go see Batman and Superman take on Joker and Lex Luthor again.

Why Aquaman should be your favorite superhero