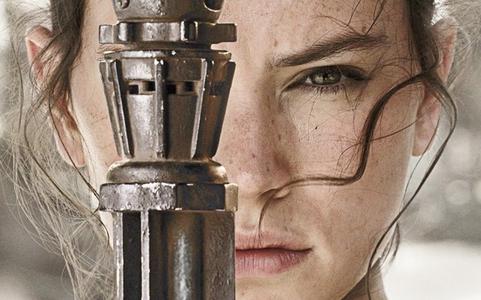 Having now seen Star Wars: The Force Awakens twice in theatres, I would be remiss not to throw in my Two Cents regarding the franchise's exciting new protagonist. Let's address the obvious first: Rey has been marketed as  "girl power" appeasement, and that always tends to feel forced (no pun intended). And yes, the character occasionally lapses into those trappings. But let me speak as a longtime female Star Wars fan, and explain why my heart still swelled in my chest when I saw a young woman wielding a lightsaber. The 70's brought us Princess Leia, and while she was still very much a damsel in distress, she was also a sturdy, quick-thinking rebel who knew her way around a blaster (and who doesn't love the tongue-lashing she gives Tarkin in one of her first scenes?). Leia will always be important. She is always going to be one of my very first exposures to a powerful woman who gets shit done... in side buns. We all came to accept slave Leia, and the fact that she will never disappear as long as conventions are operational. I'm still bothered by the fact that her removal of her bounty hunter helmet takes place mere moments before the chain and bikini, all in the same film. It seems almost knee-jerk, as if Lucas felt she had become too powerful.

I saw The Force Awakens on its second day in theatres, out of a combination of impatience and anxiety regarding spoilers. I had seen the trailers, and I knew very little about Rey--only that she was one of the main characters, and that she was a scavenger. From her very first moments onscreen (in which Daisy Ridley, who is perfect for the role, engages us immediately, with no dialogue), the Skywalker parallels are blatant. Even her attire recalls a desert version of Luke's outfit on Hoth. As the film progresses, a few of the "girl power" stereotypes emerge here and there. She talks tough, shocks bystanders with her physical strength, and chastises her new companion, Finn, for taking her hand and leading her out of harm's way. It is when she boards the Millennium Falcon that we start to see what Rey's all about.  We start to forget she is "the girl," and we start to see a hero. One of my favorite aspects of the film is her interaction with Han Solo, which has all the makings of a torch-passing (for obvious, unfortunate reasons, of course). In one scene, Han gives Rey an intense blaster, which she initially views as an insult. She tells Han she can take care of herself, to which the captain responds matter-of factly, "That's why I'm giving it to you." Personally, I interpreted that as a clear message from the film: Yes, Rey is a strong female character, but she will be more than that.  At that moment, I realized that Rey was going to be what I expected Padme to be, and suddenly, I felt like I was 14 again--rooting for a woman who will play a crucial hero's role in the Star Wars Universe. 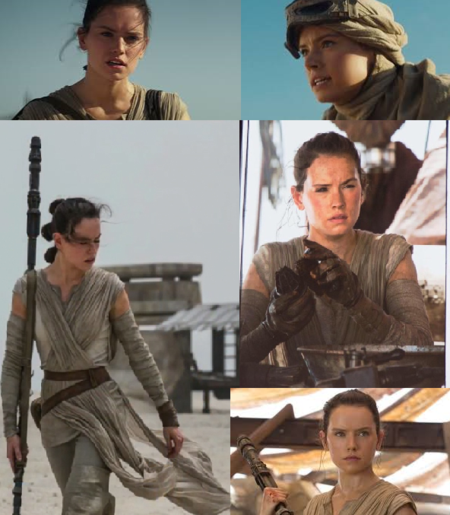 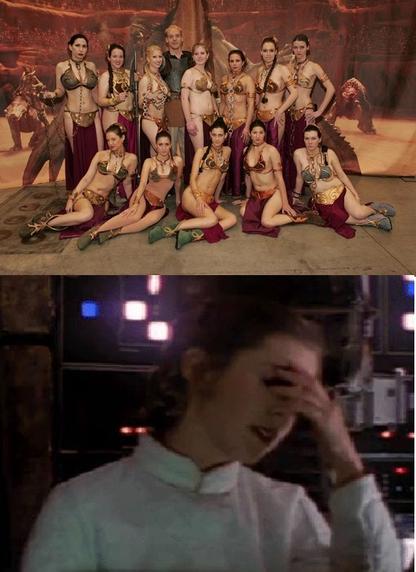 Fast-forward to 1999. I was 14, and I had just learned that the latest Star Wars heroine, Queen Amidala, mother of freaking Luke and Leia, was to be portrayed as 14 as well. I purchased a tie-in book called Star Wars Episode One Journal: Queen Amidala. It introduced the events of The Phantom Menace (and events leading up to it) via Padme' Amidala's personal musings, and I loved it. She was so clever, so strong, and I could not wait to see this character onscreen. Then, I did. She was not the droid...erm, heroine...I was looking for. The robot voice, the stupid lines, the confusing politics--all of which culminated in her ending the prequels barefoot, pregnant, and crying (and then...dying. For no apparent reason, except her child-groom becoming Darth Vader).

So, where will Rey go from here? We know she is in tune with the Force and has shown great potential to be a Jedi. We know--or can at least surmise--that she is connected in some way with Luke Skywalker, and possibly others in the family. We know that she was chosen to seek out the exiled Skywalker alone, and that her final act of presenting him with his lightsaber could mean a few different things. Having seen what we have of Rey--her scrappiness, her smarts, her command of languages and machines, etc., I am optimistic about her future. My 14-year-old self could not be more thrilled.