Well, then.  In that case, I remember quite a few board games had gimmicky physics mechanisms, including flicking or “shooting” gimmicks.  One being “Crossfire,” I wonder if a fan of that board game could create a spin on how that game works.  Maybe it's in an arena setting, out in space, where you'd have to do something as gimmicky as flicking marbles to a marble foosball that you use to score points with.

@tomixfitz wants your opinion.  Not on anything in particular.  Your opinion on sports, food, the weather;  he'll accept it all.  For no particular reason.  As far as you're concerned, of course. 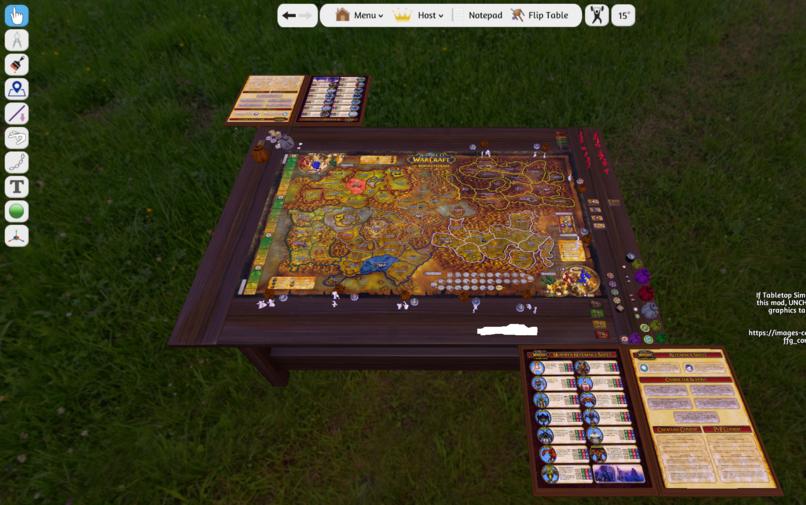 On first impression, the simulator looks a little boring and bland.  It comes with a handful of games, including classics such as checkers, chess, mahjong, backgammon, a deck of cards, etc.  The important thing to remember about the software is that it is primarily a physics simulator.  Meaning, yes, you can move, manipulate, throw, flip, etc, the various objects on the table, and they will react accordingly.  This software will NOT enforce rules, recognize rules, run games, etc.  Much like a real tabletop situation, it's the job of the players to make sure that your chosen game runs the way you wish it to. 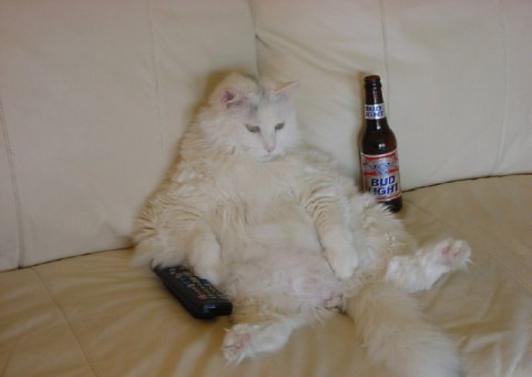 Time to see how much stuff this game can keep track of at once.  One huge board game is the World of Warcraft board game.  Surely, no one has taken the time to create the board, pieces, rules sheets, decks of cards, etc.

Up to 8 players can connect to any one game at a time.  This is more than adequate for most tabletop games out there.  Even with tabletop RPGS, any more than one Game Master and 4 or 5 players quickly becomes a hot mess.  Everything that you would need for your game can easily be found through the mods available in the Workshop, or easily scanned or recreated by those with enough drive to do so.

Black Flag - “Black Coffee” - No matter what streaming service I use, this song ends up on every custom station.  Pandora, Last.Fm, and all of my tailored Spotify Stations.  Even my Everly Brothers one.  Ever heard this song right after listening to “All I Have To Do Is Dream”?  [Gently caress] that. 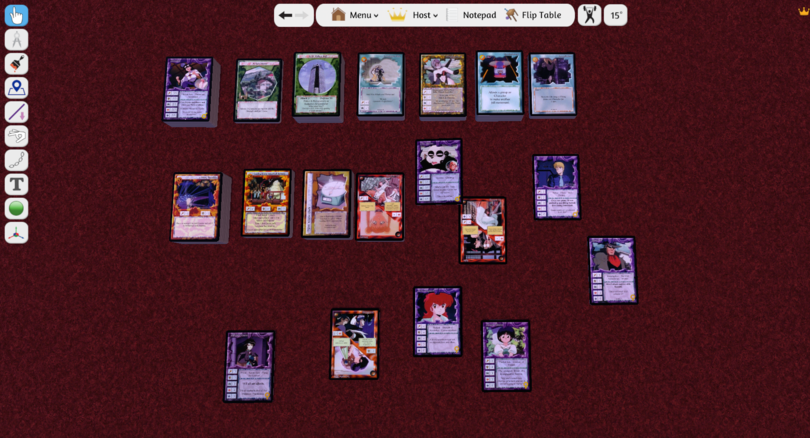 Lars Frederiksen and the Bastards - “To Have and to Have Not” -  I love me a good punk rock cover.  I'll even take a bad punk rock cover, especially over that [gently caressing] [rainbow]-bag of [sprinkles] called “The Management.”

Ok.  Lets take this one step further.  Let me think of an obscure CCG from the 90's that even I barely remember existed.

Doing a quick search through the workshop, I found a basic introduction to the latest rules edition of Dungeons and Dragons.  Included are note cards for character creation, dice, player pieces, and even dungeon tiles for the board play.  It's set up so that you just grab a few friends, and introduce yourselves to the basics of tabletop RPGS.

This cat and Paul have equal amounts of “drive.” 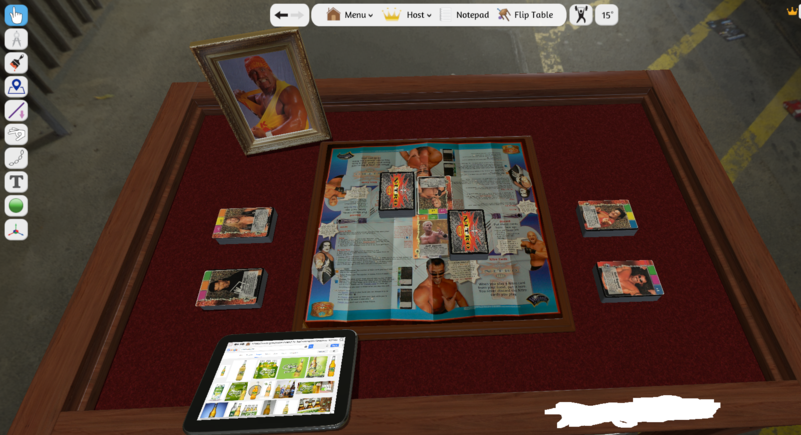 I'm liking this “What Does Tabletop Simulator Not Have” game.  Ok, I'm taking it deep.  Not just regular deep, but Dr. Thunder Deep​TM.  Can I, Tomix, by using items scanned into this game, create a scenario in this physics simulator? Can I create an environment that emulates a “Paul Game Night?”

What the software excels at is being an open forum to create/upload custom games, and to play games the way that players want to.  Though the simulator includes just those basic games and generic board game pieces, there are a myriad of user-created content packs available for download (most through the Steam Workshop).  Want to play an HD game of Monopoly with your friends out-of-state?  One of you hosts the game, the others connect via their own copies of Tabletop Simulator, and within no time, you are all having the same arguments you've been having over Monopoly since you were old enough to count money.  (I'm telling you, Steve, giving away money for Free Parking lengthens the game!). 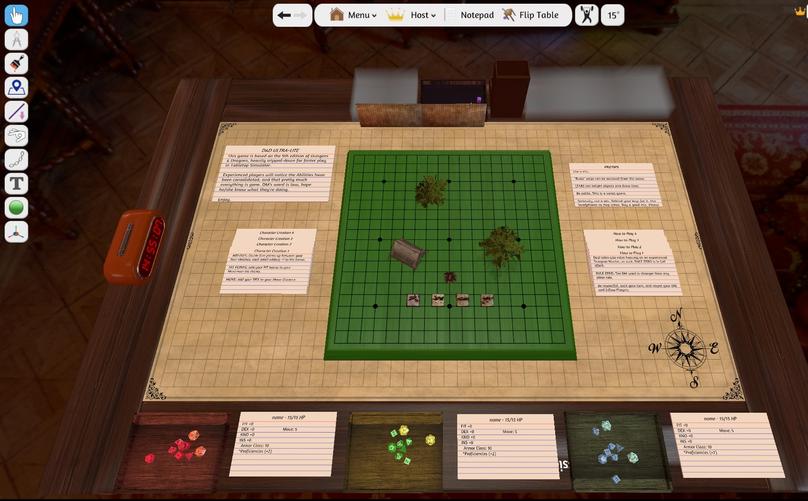 Yes, I only bring it up because its Stupid Fun.  I spent way too much time in that one. 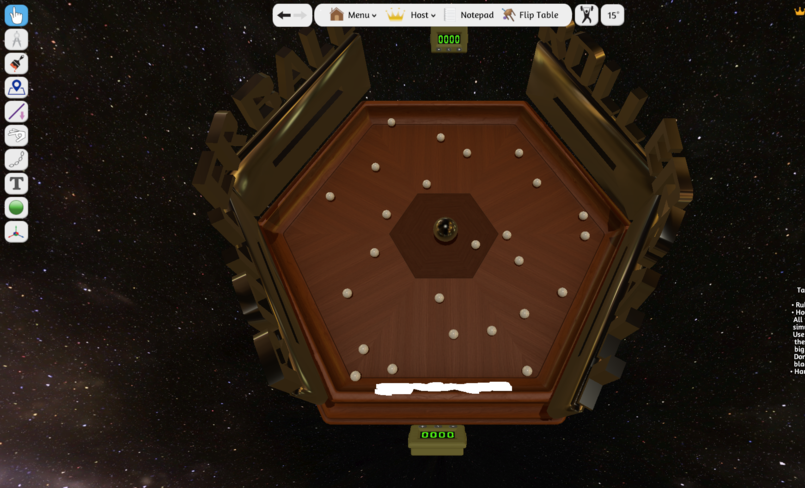 Ever wanted to play checkers, but didn't want to be around another human being?  Have a SGoA spread across the country?  Ever wanted to make an evening out of throwing dice at miniatures, but don't want the bother of cleaning up the mess?  Berserk Games has your back, bro.  This company has created a tool for all tabletop gamers and developers that is worth taking a serious look at.